Lee Eun Sang Shares Update And His Goals For 2020

Lee Eun Sang talked with fans in a live broadcast!

On January 17, the idol held his first solo broadcast on V Live, which was his first chance to speak with fans since the disbandment of X1 on January 6. “I was so nervous because it’s been a long time,” he said.

“Lately I’m working on songwriting,” he shared. “I started recently, and I’m making songs and also learning dances that I wanted to learn.” He also said, “I’ll give you good news soon.”

Lee Eun Sang shared that he’s lately taken on cooking as a hobby. “I make cookies and also pasta,” he explained and commented that cooking helps him relax.

When a fan commented that they want to hear his self-composed songs, he said, “It still hasn’t been that long since I started. I need a bit more time.”

When asked what his goals are for 2020, Lee Eun Sang said, “Seeing you soon is my goal. Also, I want to meet you after upgrading a bit from the Lee Eun Sang of last year. I want to improve musically.” 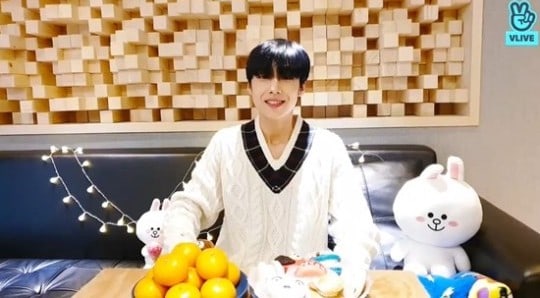 Lee Eun Sang ended the V Live by saying, “I’m really working hard at preparing. I want to keep showing you how I’ve improved so I’m working hard, so please wait.” He added, “Today’s the start and I’m going to come see you a lot, through V Live and other ways too. This isn’t the end today. I’ll come a lot.”

He commented that he hopes for the happiness of his fans and asked them to share ideas for the kind of V Live content they’d like to see him do.

Lee Eun Sang competed on the survival show “Produce X 101” in 2019 as a trainee under Brand New Music. He debuted with the project group X1 in August, and the group disbanded earlier this month due to a vote manipulation controversy.

Lee Eun Sang
X1
How does this article make you feel?