Girls’ Generation Members Cheer On Taeyeon At Her Concert

Members of Girls’ Generation went to cheer on Taeyeon at her concert!

Taeyeon began her “The Unseen” concert series on January 17 at the SK Olympic Handball Gymnasium in Seoul, which runs for three nights.

Afterwards, YoonA shared a photo of herself with Sunny, Taeyeon, Hyoyeon, and Seohyun backstage. She also posted an image of the four of them holding their light sticks together for Taeyeon. She wrote as the caption, “So great. Taeng Con [Taeyeon’s concert]. It’s been a while!!”

Sooyoung commented to write a sad reaction noise and “Me too” as well as some crying emojis, while Tiffany replied to the post with a heart! 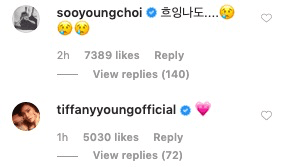 Hyoyeon also posted the group photo and wrote in the caption that it had been a treat for her ears. Tiffany again replied with a heart.

Seohyun posted a photo and shared her pride and praise for Taeyeon as she described her as someone guaranteed to be good to listen to and watch. She also commented that Taeyeon had been the greatest that day too.

“My members who I saw for the first time in a while, I felt as familiar with you as though we’d seen each other yesterday but now I’m even more fond,” she wrote. “As expected, we have to meet once and a while.”

Taeyeon made a comeback on January 15 with her repackaged second album “Purpose,” including the title track “Dear Me.”