Kim Min Jae And Ahn Hyo Seop Are At Odds With One Other In “Dr. Romantic 2”

The second installment of “Dr. Romantic” tells the story of “real doctor” Kim Sa Bu (played by Han Suk Kyu), who works at the small, humble Dol Dam Hospital, and the people who meet him.

Ahn Hyo Seop plays Seo Woo Jin, a great surgeon who is a second-year fellow with a painful past and a dangerous amount of debt, while Kim Min Jae plays Park Eun Tak, a responsible, righteous, and warmhearted nurse. The fresh chemistry between Seo Woo Jin, who is new to Dol Dam Hospital, and Park Eun Tak, who knows all about Dol Dam Hospital, is mesmerizing the viewers.

The newly released stills show Seo Woo Jin and Park Eun Tak engaged in a serious conversation in the staff room. Park Eun Tak says something that makes Seo Woo Jin both thoughtful and flustered. There is subtle tension between the two characters, which raises questions about the verbal war they will have in the next episode. 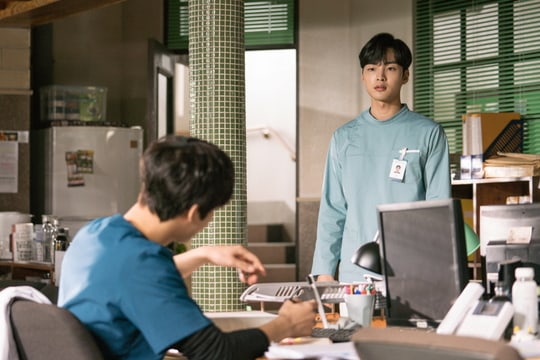 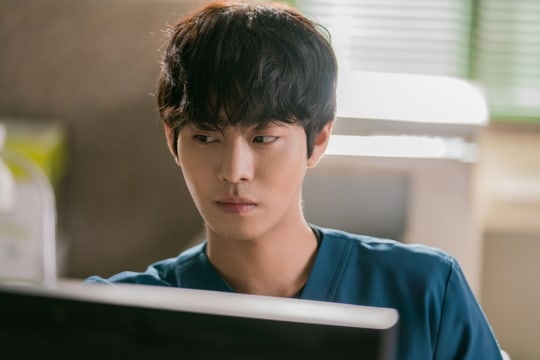 This scene was filmed at a set in Yongin, Gyeonggi Province last November. Even before the shooting, the two actors prepared for the emotional scene by reading the script together side by side. Because the scene involved a calm exchange of words without revealing the intensity of their emotions, the actors had repeated practice sessions in order to deliver their lines smoothly and avoid breaking the flow.

Furthermore, the two men continued to review their respective lines even during the brief waiting times in order to perfect the various angles of filming. They made efforts to stay in their positions during each other’s lines in order to achieve a perfect scene.

Production company Samhwa Networks commented, “The ‘great teamwork’ between Ahn Hyo Seop and Kim Min Jae, who are depicting characters with different personalities at Dol Dam Hospital, is making the drama more captivating. Please look forward to this week’s episode where Ahn Hyo Seop, who struggles to find answers to Kim Sa Bu’s question, and Kim Min Jae, who shows his expertise as a guardian of Dol Dam Hospital, will have a private meeting.”

“Dr. Romantic 2” airs on Mondays and Tuesdays at 9:40 p.m. KST. Check out the latest episode with English subtitles below!