Watch: Son Ye Jin’s Makeup Artist And Hair Stylist Discuss Her Natural Beauty And Styles In “Crash Landing On You”

The secrets to Son Ye Jin’s beauty in her current drama “Crash Landing on You” have been revealed!

On January 18, the actress’s hair stylist Gu Mi Jeong and makeup artist Mu Jin discussed her styling in the tvN drama where she plays Yoon Se Ri, a South Korean heiress who unexpectedly made a crash landing in North Korea.

First off, Gu Mi Jeong shared that the actress has two concepts in the drama: her Seoul look and her North Korean look. Mu Jin explained, “Yoon Se Ri as a character has a charismatic and classy impression, like a CEO. I wanted to express that. When she’s in North Korea, she isn’t a North Korean woman; she just landed there by accident. You can’t wear makeup in that situation. So I didn’t apply much makeup, and it’s really a perfectly natural look.”

As for the differences in hairstyles, Gu Mi Jeong said, “In Seoul, her hair is more stylish. Since she’s a third generation chaebol, she probably does her hair in the neighborhood of Cheongdam, so her hair is done in three expensive perms. In North Korea, her hair is just a natural perm. There is a line in the script that mentions ‘scruffy hair.’ While reading that script, I thought I should give her hair a natural look.”

Mu Jin also revealed that instead of using a powdered product on Son Ye Jin, she uses two different tones of liquid type base products. It creates a natural gradation on her face and makes it look smaller. Then she praised Son Ye Jin for having nice skin texture and added that she doesn’t apply much foundation to the actress’s face. 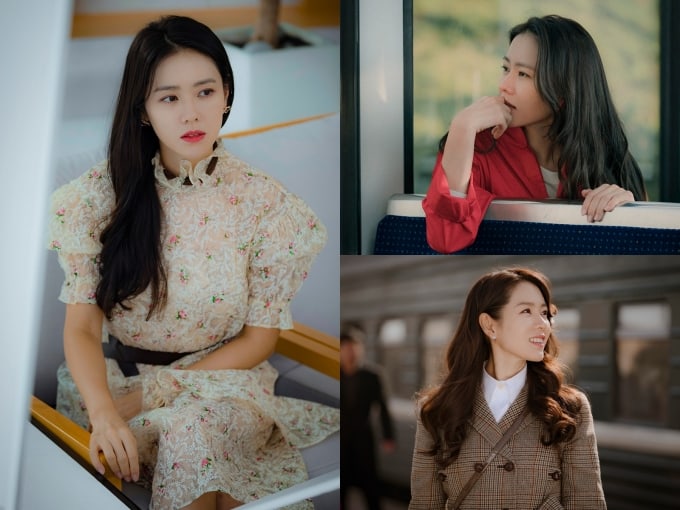 The makeup artist also revealed that Son Ye Jin doesn’t wear makeup when her character is in North Korea. She doesn’t use eye shadow or mascara and doesn’t curl her lashes. On top of that, she only applies lip balm to her lips instead of a colorful lipstick. The makeup artist commented while laughing, “Sometimes, customers ask to get their makeup done like Son Ye Jin, but customer, this is Son Ye Jin. I’m sorry, but I can’t do anything about it.”

Mu Jin continued, “Son Ye Jin is an actress who values reality. I was really surprised in the beginning when she didn’t have her hair done for the indoor shoot. If there is a scene where she washes her face or a scene before she sleeps or a scene after she wakes up, then she doesn’t style her hair. She only gets her makeup done, which is also barely done.”

Gu Mi Jeong added that Son Ye Jin personally styled her hair for both “Pretty Noona Who Buys Me Food” and “Crash Landing on You” whenever she needed to look natural. The actress dislikes it when her hair seems professionally done when it’s supposed to look natural.

Watch the full video with English subtitles below!