The identity of contestant Hotteok was revealed in the latest episode of “The King of Mask Singer”!

During the January 19 broadcast of the singing competition, Hotteok and contestant Tapgol Park faced off in the second round. Hotteok opened the battle with a cover of Suzy’s “Holiday,” while Tapgol Park performed Lee Joo Won’s “For Our Precious Love.” 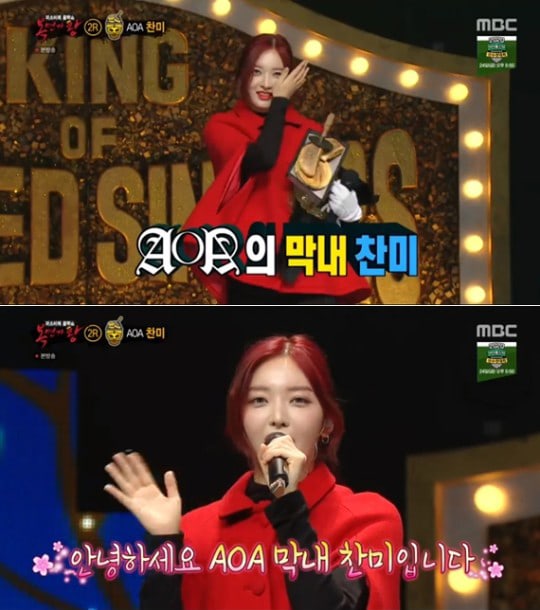 Tapgol Park won the round with 71 votes to 28 and moved onto the next round. Hotteok remained on stage and removed her mask to herself as AOA’s Chanmi!

Chanmi commented, “[My position on the group] isn’t being a vocalist, so I wondered why [the show] called me. I thought, ‘Did they need a particular type of person?’ But I find it meaningful to take on new challenges, so that’s why I tried this out.”

Chanmi also revealed her admiration for Celeb Five, saying, “It seems like the [Celeb Five] members just do what they want without caring about their surroundings. That was really cool to me. I hope [AOA] can also have fun together even when we grow older.”

Panelist Yoo Young Suk later voiced his support for Chanmi and encouraged her to further challenge herself in her singing endeavors.

Following the broadcast, AOA’s official Twitter uploaded a photo of Chanmi with the caption, “The day [everyone] fell for Chanmi’s sweet voice!”

Watch an episode of “The King of Mask Singer” below!

AOA
Chanmi
The King of Mask Singer
How does this article make you feel?