Jeon Do Yeon and Jung Woo Sung talked about starring in a film together for the first time!

On the January 22 episode of SBS’s “Night of Real Entertainment,” the actors participated in an interview to promote their latest film “Beasts Clawing at Straws.” This is a film adaptation of Keisuke Sone’s novel of the same name about people in desperate situations who must live with unexpected results of their choices.

Jeon Do Yeon and Jung Woo Sung are stars who debuted around the same time and rose to stardom in the film industry. Despite this, the actors never crossed paths to star in a film together until “Beasts Clawing at Straws.”

“I’m glad that we got to film [together] even now,” said Jeon Do Yeon. Jung Woo Sung agreed, “Since you guys are saying that, it makes me think that I wasn’t the only one who waited. It’s an honor.”

The two actors are the same age. Speaking about her observation of Jung Woo Sung on set, Jeon Do Yeon said, “It made me think that he’s an actor with appearances I had not seen before. I want to work with him again on a film set.”

Jung Woo Sung also shared his thoughts on his co-star. “It made me think that it must’ve been hard for her to portray fierce characters [in past films],” said the actor. “I hope that this is a time where actress Jeon Do Yeon can become whole while portraying a lighthearted role.” Jeon Do Yeon was moved by his words, and told him, “Thank you. I’m so moved.” 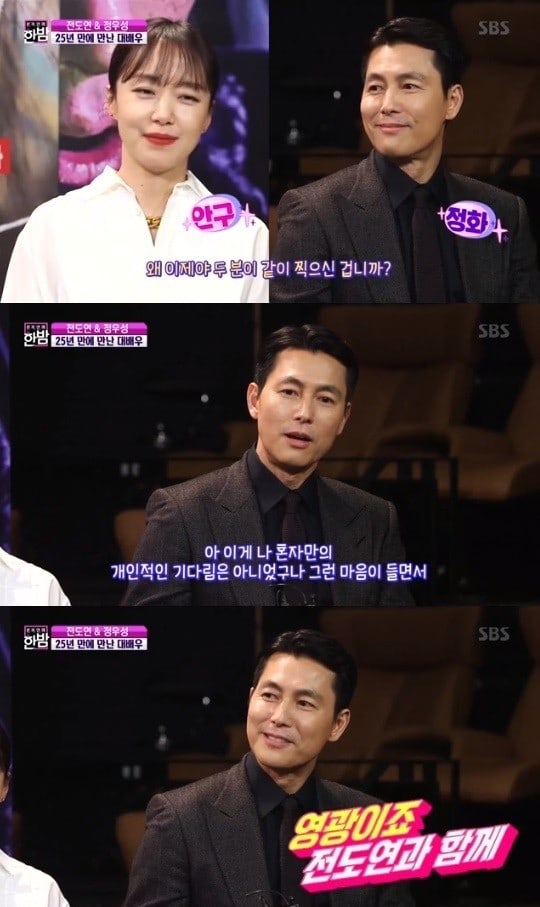 The film stars also tested their chemistry during the interview where they were given two choices and had to answer at the same time. They were asked questions such as spicy seafood noodles or black bean noodles, night or day, and melodrama or action. They had different answers to all of the questions before both responding “melodrama” for their film preference.

Jeon Do Yeon
Jung Woo Sung
Night of Real Entertainment
How does this article make you feel?