On January 22, “The Game: Towards Zero,” the new Wednesday-Thursday drama from MBC, held a press conference with its cast and crew.

“The Game: Towards Zero” tells the story of a man who is able to see the moment before someone’s death (2PM’s Taecyeon) and a police detective (Lee Yeon Hee) as they team up to uncover the truth behind a 20-year-old murder. 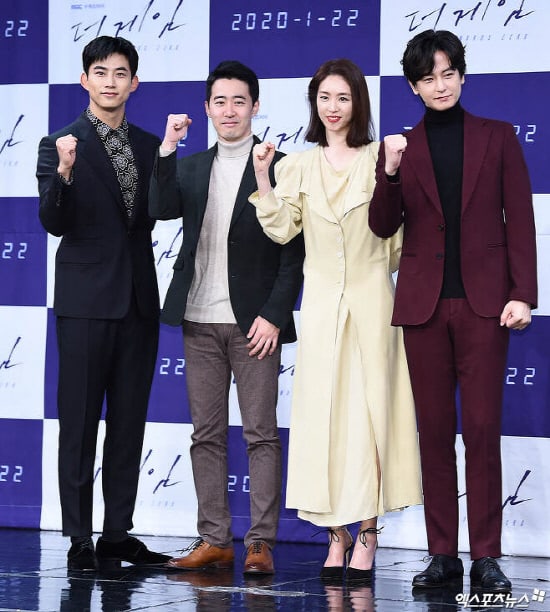 At the press conference, Taecyeon was asked about his recent discharge from mandatory military service. He said, “This is my first project after my discharge, so I do feel a lot of pressure, but I’m working hard on filming. I read the ending of Episode 4 and I thought I really had to do this project. The episode endings were really good. I was so curious about what would happen next.”

Taecyeon also shared his thoughts on recently moving agencies. He said, “There have definitely been some changes after moving agencies. I was able to have more conversations about acting and get some feedback. I’m grateful and happy for that. So Ji Sub has given me a lot of advice but he’s filming a movie right now. He asked me if he should give me tough feedback or gentle feedback after the first episode, so I hope he gives me gentle feedback.”

When asked about ratings, Lee Yeon Hee said, “In the past, I could depend on my fellow actors, but now I feel like I have to take responsibility. I didn’t have a lot of ambitions for ratings in the past, but I feel more responsibility for this one. I really hope it does well. Please tune in to the first episode.”

Im Joo Hwan, who plays a medical examiner with the National Forensic Service, said, “Are ratings important? I don’t think they’re that important. I’m sure it’s important to some people internally, but to the people on set, ratings are not as important as how this project and this character can add to our lives as actors. I’ve never had a project with really good ratings. I don’t really care about ratings, but if possible, I’d like to get to 15 percent. I would also like the drama to be broadcast abroad so the actors here can stand on a bigger stage.”

Lee Yeon Hee joked, “Taecyeon said that he would sing ‘My Ear’s Candy,’ would you sing it with him?” She added more seriously, “I would be so happy with 15 percent. I will do a mukbang [eating broadcast] or cookbang [cooking broadcast] on social media [if that happens].”

Taecyeon’s promise was a reference to his recent radio show appearance, where he said that he would try to get combined ratings of 40 percent in honor of the year 2020. Radio host Jang Sung Kyu said that it was hard to get past 10 percent nowadays and said that 10 percent was basically like 40 percent. Taecyeon then promised to sing “My Ear’s Candy” with Jang Sung Kyu if ratings topped 10 percent.

Check out the first episode of “The Game: Towards Zero” below!

2PM
Im Joo Hwan
Lee Yeon Hee
Taecyeon
XPN
The Game: Towards Zero
How does this article make you feel?