On January 22, a comment that Gong Hyo Jin had made began circulating on online communities. An Instagram account had shared a video clip of Gong Hyo Jin in the 2003 drama “Sang Doo! Let’s Go to School,” with a short summary of the scene. On the post, Gong Hyo Jin left the comment, “Please. Can you stop bringing back my old dramas? Please, I beg you.” The fan responded to the comment with, “Yes, actress Gong [nickname for Gong Hyo Jin]. I’ll do that. Thank you.” 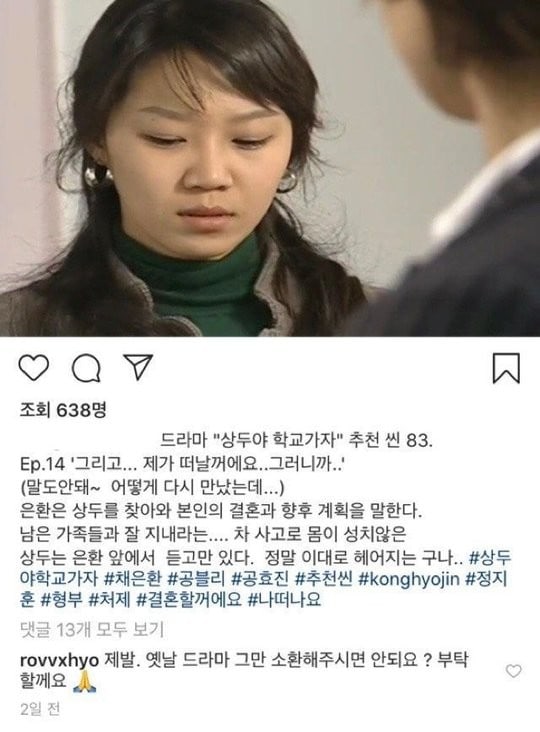 A screenshot of Gong Hyo Jin’s comment began circulating on online communities and social media, and people began to debate whether Gong Hyo Jin’s request to a fan to stop posting certain types of content was appropriate or not.

I didn’t leave that comment with that kind of intention, but I’m sorry to the owner of that account and the many people who have gotten hurt.

To me, every project I work on and every person who likes those projects are all precious. I just feel shy about my very lacking acting skills from so long ago.

I hope there are no other misunderstandings about this. Don’t be mad anymore, please.

To my loving actress Gong!

Firstly, I’m so sorry. You became the center of attention because of my account and things blew out of proportion, which was not something either of us wanted to happen, and I’m so upset and apologetic that it might have greatly hurt you.

I understood the comment you sent me without any misunderstandings, and it made me think about supporting you in the future in a way that you would like more. The reason I temporarily stopped posting on my account was in hopes that I wouldn’t unknowingly cause a bigger misunderstanding.

I think there’s something that other fans are misunderstanding, so I feel the need to say it. I’ve been a fan for a long time, and I will keep sincerely cheering Gong Hyo Jin on until the day she receives another Grand Prize on her 40th debut anniversary, 20 years from now.

Lastly, I wish to apologize for the controversy caused by my account, and for causing concern to Gong Hyo Jin and other fans. Thank you for reading my long comment. 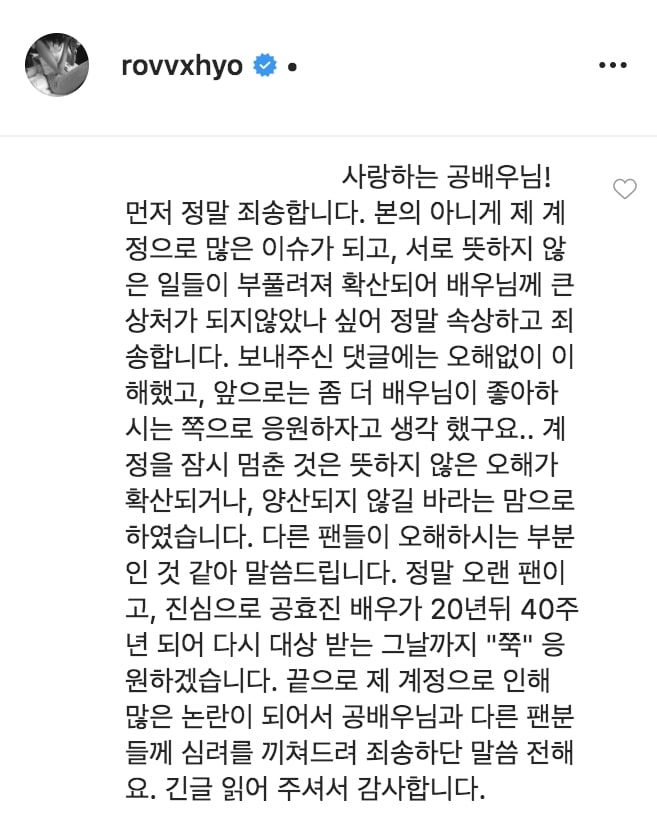