Kian 84 drew some inspiration from BTS for his Lunar New Year look!

On the January 24 episode of “Home Alone” (“I Live Alone”), the cast members showed up to the studio in their traditional Korean hanbok attire.

Introducing Kian 84’s outfit to the others, Park Na Rae said, “Don’t be shocked, but Kian 84’s look is inspired by BTS’s Jungkook. It’s the same design.” Jungkook has frequently sported this modern hanbok look at airports, and BTS was previously recognized for their love and promotion of traditional Korean clothing.

Park Na Rae went on to jokingly tease him, “Are you saying that you’re like the BTS of the webtoon world?” 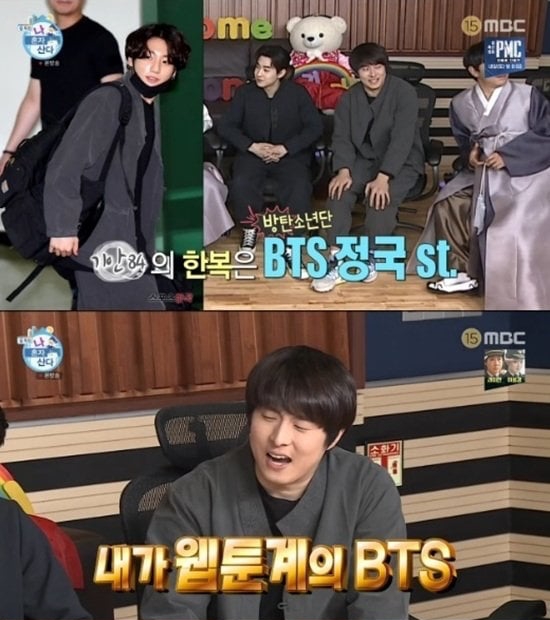 Kian 84 insistently waved his hand around to say no before adding, “I really like BTS and I’m a fan.” He further surprised the cast by asking if he could perform his cover of BTS’s “Boy With Luv” for them.

Dancing to the original choreography, he turned around and sang the beginning of the song while moving his shoulders to the beat. The members reacted with confused looks on their faces, and Kian 84 stopped out of embarrassment.

He sat back down and said, “I won’t do it.” Referring to Kian 84’s cover of “Boy with Luv,” Park Na Rae joked, “Were you mumbling?” Kian 84 then apologized to BTS’s fans for his performance by saying, “I’m sorry, ARMYs.”

Check out the clip of Kian 84 dancing to “Boy With Luv” below!

BTS
Jungkook
Home Alone
Kian 84
How does this article make you feel?