“Dr. Romantic” was known for its impactful lines, and the second season so far is also filled with meaningful narration!

“Dr. Romantic 2” features narration about the true values of today’s era and immerses viewers with thoughtful and meaningful words. Here are two narrations from the drama that touch your soul deep within and make you think about what’s important:

“An age of loathing. We draw lines, demean each other, mock each other, and belittle each other just because we have different thoughts. It’s a black-and-white world of collective selfishness and dichotomous division and if someone is not on your side, they automatically become your enemies. Respect for opponents has disappeared, and the world has become full of disdain and disgust. That’s when there was a man who showed up at the very moment…”

In episode three, Seo Woo Jin (Ahn Hyo Seop) was branded as backstabbing garbage and boycotted by the other doctors because he acted as a whistleblower to file a complaint against those who received bribes and abused medical procedures. His locker was full of hateful post-its with abusive language, and rumors of him working at a bar caused him to be fired.

Also, Cha Eun Jae (Lee Sung Kyung) was called out by her professor for falling asleep in the operation room after taking a tranquilizer to overcome her anxiety about surgery. Her professor demanded, “Do you want to stop being a doctor? This is why I said I won’t work with women.” The narration that played in the background as Kim Sa Bu (Han Suk Kyu) picked Cha Eun Jae and Seo Woo Jin to work for him at Doldam Hospital enhanced the significant moment. 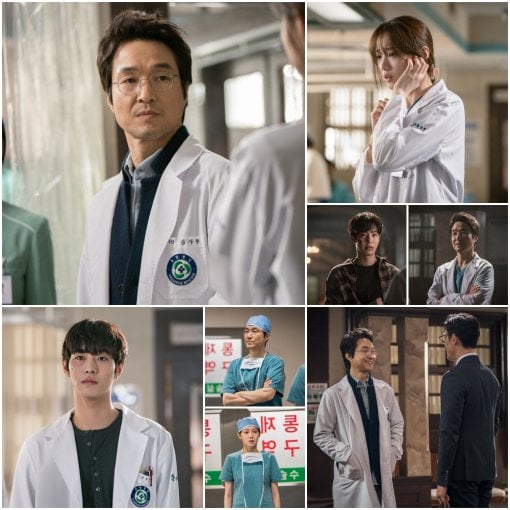 “The age of cost-effectiveness. A world in which all relationships are judged only by efficiency and profit. Responsibility and duty have degenerated into unreasonable sacrifices, and it has become a world where public interest and good are calculated for profit and loss.”

Do Yoon Wan (Choi Jin Ho), who is at odds with Kim Sa Bu, showed Park Min Kook (Kim Joo Heon) a bird’s-eye view of the new hospital that provides medical services to rich customers and explained the low number of medical services, excessive competition among hospitals, and medical lawsuits that doctors face. Do Yoon Hwa blamed the atmosphere of forcing doctors to take heavy responsibility and sacrifice as he said, “The world doesn’t respect us, and now we have to find our way of survival. With dignity and with value.”

At the same time, loan sharks threatened Seo Woo Jin to do what they tell him to do so that his debt of 70 million won (approximately $59,819) can be paid off. This is when the important narration played, which made people think about the price of responsibility and profits.

The production company, Samhwa Networks, said, “The introduction of the drama begins with an insightful narration into the grim present era, inviting viewers’ attention and doubling their immersion in the drama. Writer Kang Eun Kyung’s straightforward narrations are an important catalyst that conveys the strong message of ‘Dr. Romantic 2’ and evokes realistic sympathy.”

In the meantime, catch up on the latest episode with English subtitles on Viki: