On January 28, the two close idols appeared on an episode of “Petionista Taengoo” with their pet dogs.

In the beginning of the video, Taeyeon and Kim Heechul allowed their dogs Zero and Gibok to get to know each other. When Zero growled at Gibok, Kim Heechul wittily commented that her dog is small and feisty like her, and Taeyeon simply laughed as she was at a loss for words.

Taeyeon asked about the hardships of living with Gibok, and Kim Heechul replied, “First, I don’t have much time for myself.” He added that Gibok still wants him to throw the ball even though he bought an automatic ball thrower for Gibok.

Kim Heechul asked Taeyeon if she was struggling with anything nowadays, and she admitted that she was tired. She shared, “I’ve never thought about vacations before, but for the first time ever, I thought about taking a vacation last year. I need some time to recharge, but I had to work back to back.” 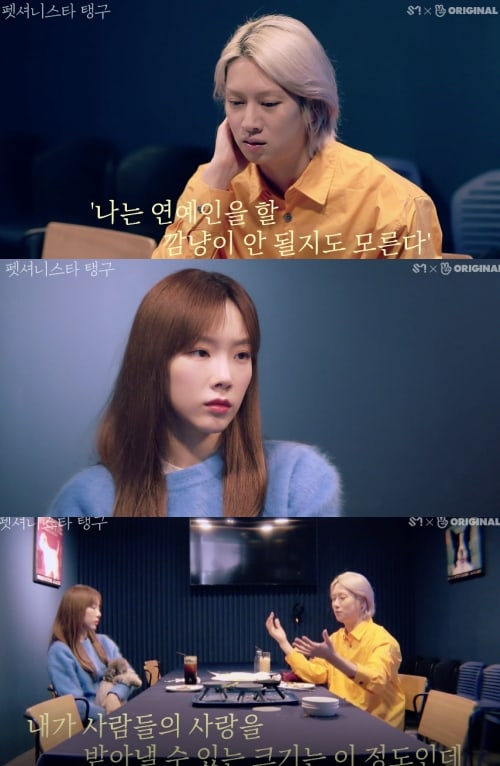 Kim Heechul brought up the news of his relationship with TWICE’s Momo and commented, “The public and even my fans must have been upset when the issue came up, but they said, ‘You’ve never caused a big incident in the past, so this kind of thing is fine. Thank you so much, and we always support you.’ On one hand, that made me feel guilty.”

He continued, “I’m only able to accept a certain amount of love from the public, but after this incident, so many fans showed me love, and I felt sorry about receiving all of it. So I thought I might not have what it takes to be a celebrity.”

To that, Taeyeon humorously quipped, “Crazy people like you should be celebrities,” and Kim Heechul asked, “Are you comforting me or teasing me?” Then he revealed that he had been preparing a solo album titled “Flower Petal” but decided to delay it because of the dating news.

Taeyeon asked, “You were afraid people might misunderstand it?,” and Kim Heechul agreed, saying, “Yes, exactly. I wanted to block anything that could be misinterpreted. So I talked to the company and said I’d release my solo album later on. I was sad, but at the same time, I don’t think I made a wrong choice. I won’t be able to sing the song in the voice I have now at the age of 38 [in Korean reckoning], but still, I can sing it in my voice later on. I’m trying to be positive. I’ve turned into a really positive person.”

Watch the full clip with English titles below!