On January 28, MOMOLAND’s JooE made an entertaining appearance on SBS PowerFM’s “Cultwo Show”!

Host Kim Tae Gyun asked JooE whether she gets recognized a lot when she goes outside, which JooE confirmed. Special DJ Yoo Min Sang then brought up her infamous soda commercial that got her the nickname “Tropicana Goddess.” He commented, “When I did internet broadcasts, [that commercial] came on 20,000 times. Even though I hadn’t drank the soda, it felt like I did.”

When asked how she came to film that iconic advertisement, JooE answered, “You know the programs where you have to try really hard? Once I did a game where you had to complete a quiz using your body and I think I got the call after they saw that.” While imitating her dance from the commercial, she jokingly added, “I forget so easily that I think there are many people who do the dance better than me now.” 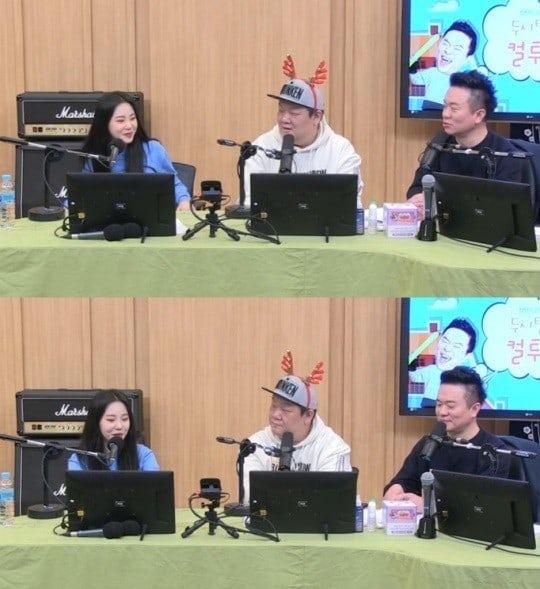 She also revealed that an ad she wants to do next is for soju, explaining, “I’m currently the model for soda, makeup, and hamburger brands. I’ve become an adult now. Since I was underage when I filmed the soda commercial, I think it’ll be good to now try advertising mature and refreshing alcohol.” However, as part of their game, JooE had to complete a punishment because too many people had predicted her answer. Her punishment was to do the Tropicana dance while saying “I won’t film ads anymore, please contact other girl groups.” Although suggesting it was too harsh, JooE passionately and hilariously completed her mission.

JooE also discussed her recent hair transformation, finally dying her hair black after maintaining blonde hair for the majority of her career. She shared, “I dyed my hair this morning, and I’m revealing my dark hair for the first time today. Dark hair was a goal I had for this year. That’s why I got the approval from my agency and dyed it.”

MOMOLAND
Cultwo Show
JooE
How does this article make you feel?