SECHSKIES Discusses Their Return With 4 Members, Making A Comeback Alongside Super Junior, And More

SECHSKIES has returned for the first time in over two years, as a four-member group!

On January 28, SECHSKIES held a press conference for the release of their first mini album “ALL FOR YOU.” They discussed their reorganization as a four-member group with Eun Ji Won sharing, “We are most apologetic towards fans for our reorganization. However, each member worked really hard on this album. We filled each song with the vocals that fit it, so it’s not biased towards anyone. It’s an album we prepared with a burden but also a responsibility.” 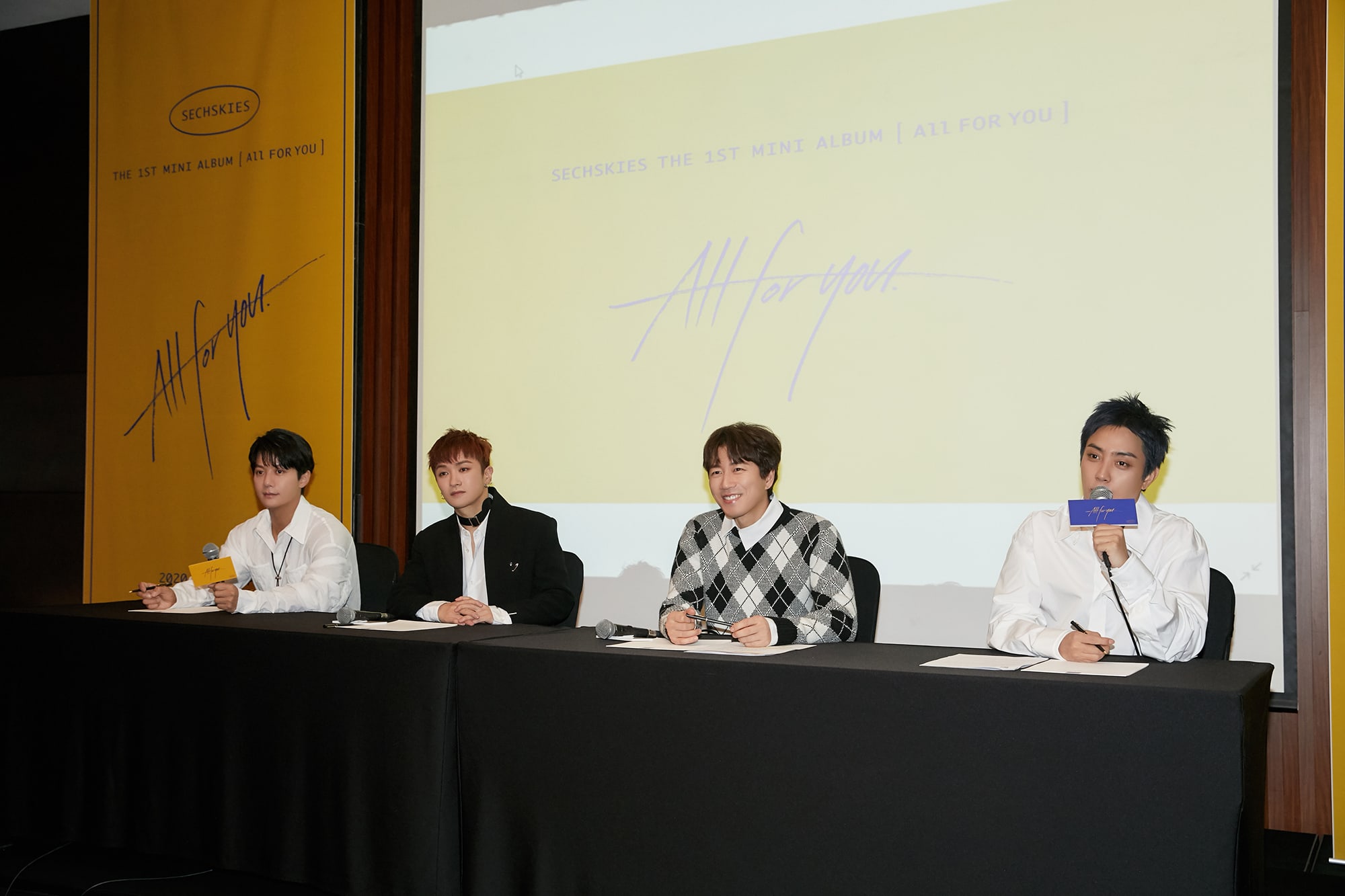 Eun Ji Won continued, “As the leader, I have to know the members’ traits well in order to direct, but this time around I had nothing to do. That’s how well the members recorded. You will be able to see Lee Jae Jin’s rebirth as a vocalist.” Lee Jae Jin also commented, “I received continuous vocal lessons in order to help out our team. After listening to the recordings, I felt good because I thought I was helpful.”

Jang Su Won added, “We are tight whether there are six or four of us. Regardless of the number of members, we have a strong relationship. Although we bicker, we become closer through that.”

In addition to this comeback, SECHSKIES plan on showcasing their everyday lives through an upcoming reality show and will meet with fans during their upcoming concert in Seoul on March 6 to 8. Eun Ji Won shared, “I can’t promise when we will promote until. However, we will work hard. We are maintaining our team thanks to the members. Since our members are good with it, we are together whether we do well or not.” Jang Su Won also shared love for their fans, stating, “I think we’re able to maintain our team because of our fans. Without our fans, we wouldn’t be here right now.”

The group also emphasized their desire to be recognized by the public, with Kim Jae Duk sharing, “I hope that ‘ALL FOR YOU’ will play lots on the streets and in cafes so that the public can listen to it.” Eun Ji Won added, “We are a group that cannot give up on the public. Thinking ‘How can we be satisfied?’ helps us grow.”

The veteran group also expressed admiration for fellow senior group Super Junior, who made their comeback on the same day. When asked about them, Eun Ji Won questioned, “Is Super Junior coming back today too? They won’t know we are making a comeback today either. They’re junior artists right after us. It feels good to be making a comeback at the same time as them. We’ll be able to lean on one another in waiting rooms. We are very close with the members.”

Kim Jae Duk also commented on SECHSKIES’ long-time rival, H.O.T., who recently held a reunion concert. He shared, “I went to watch and cheer on the H.O.T. concert. Now, I view them as companions and am cheering them on in hopes that they do well.”