January 31, the cast of “Time to Hunt” got together for a press conference ahead of the film’s premiere.

Set in a dystopian future, “Time to Hunt” is a new thriller starring Lee Je Hoon, Choi Woo Shik, Ahn Jae Hong, and Park Jung Min as four friends who hatch a dangerous plan to escape to a better life. The movie will follow the four friends as they put everything on the line for the chance at a new life — and the breathless hunt that ensues as a mysterious figure begins chasing them.

On playing his character in the film, Lee Je Hoon said, “There wasn’t much difficulty in playing the character. But, there were a lot of requests [from the director] that we portray the experience of creating a plan and the horror of being hunted as realistically as possible.”

Ahn Jae Hong said, “I wanted to look different than I usually do, so I shaved my head, bleached my hair, and used makeup to make my skin look more rough.”

Choi Woo Shik talked about getting tattoos drawn on for the film. “[The tattoos] took a long time. I’m the youngest, so I had to make it believable that I was friends with the older guys. It’s not that I tried particularly hard, but they were really good to me, and it was a lot of help.”

Park Jung Min said, “It was important that I didn’t stick out too much in terms of the chemistry of the four of us.”

Actor Park Hae Soo, who is the hunter in the film, said, “Because I’m the hunter, I generally filmed at night. They’re all close friends, and I was chasing them on my own. I was really jealous.”

“Time to Hunt” premieres in February. 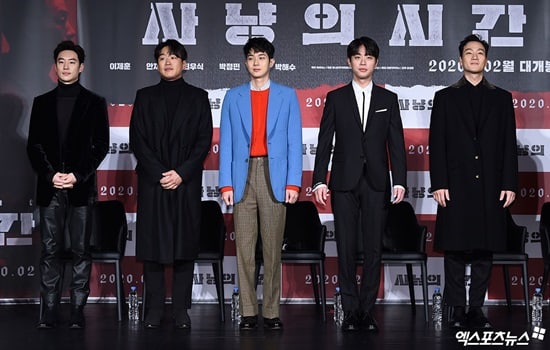