Watch: Girls’ Generation’s Sooyoung Gets Shy At Mention Of Boyfriend Jung Kyung Ho On “Ask Us Anything”

Girls’ Generation’s Choi Sooyoung couldn’t help getting shy when asked about her relationship with Jung Kyung Ho on “Ask Us Anything”!

On the February 1 episode of the JTBC variety show, Sooyoung appeared as a guest alongside her co-star Jin Seo Yeon to promote their new OCN drama “Tell Me What You Saw.”

After Jin Seo Yeon talked about her husband on the show, cast member Lee Sang Min teasingly brought up Sooyoung’s longtime boyfriend Jung Kyung Ho by mentioning that he was a big fan of the 2013 drama “Heartless City.” Sooyoung managed to keep a straight face as she replied, “Oh, JTBC’s ‘Heartless City’?”

Lee Sang Min pressed forward by pointing out, “It’s your boyfriend[‘s drama],” and Sooyoung broke out into nervous giggles. Lee Sang Min then turned to the production crew and asked, “Is it not okay for me to talk about her boyfriend?” Sooyoung replied, “Why wouldn’t it be okay?” before playfully adding, “Of course you can talk about him. Then can I talk about [your love life] too?” 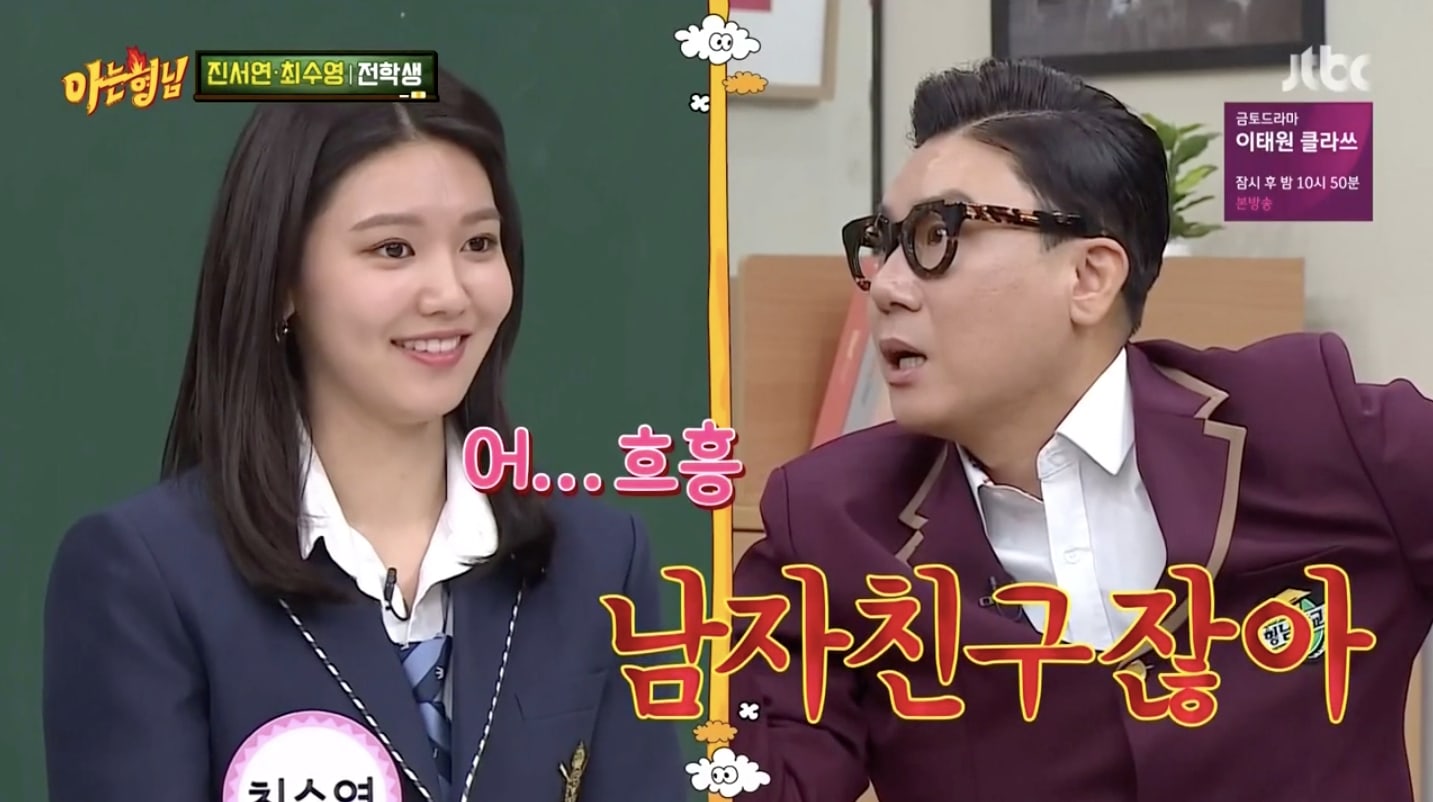 Seo Jang Hoon went on to remark, “You guys are a longtime couple. Haven’t you been dating for a while now?” As Sooyoung nodded in confirmation, Kim Young Chul observed, “Surprisingly, Sooyoung seems to get shy whenever her boyfriend is mentioned. Because I saw on your Instagram that you guys send food trucks and coffee trucks to the set of each other’s dramas. But whenever you’re on television, you seem to get shy while talking about it.”

Sooyoung explained, “It’s more that there always end up being so many articles about [our relationship], so I get nervous whenever I talk about it.” 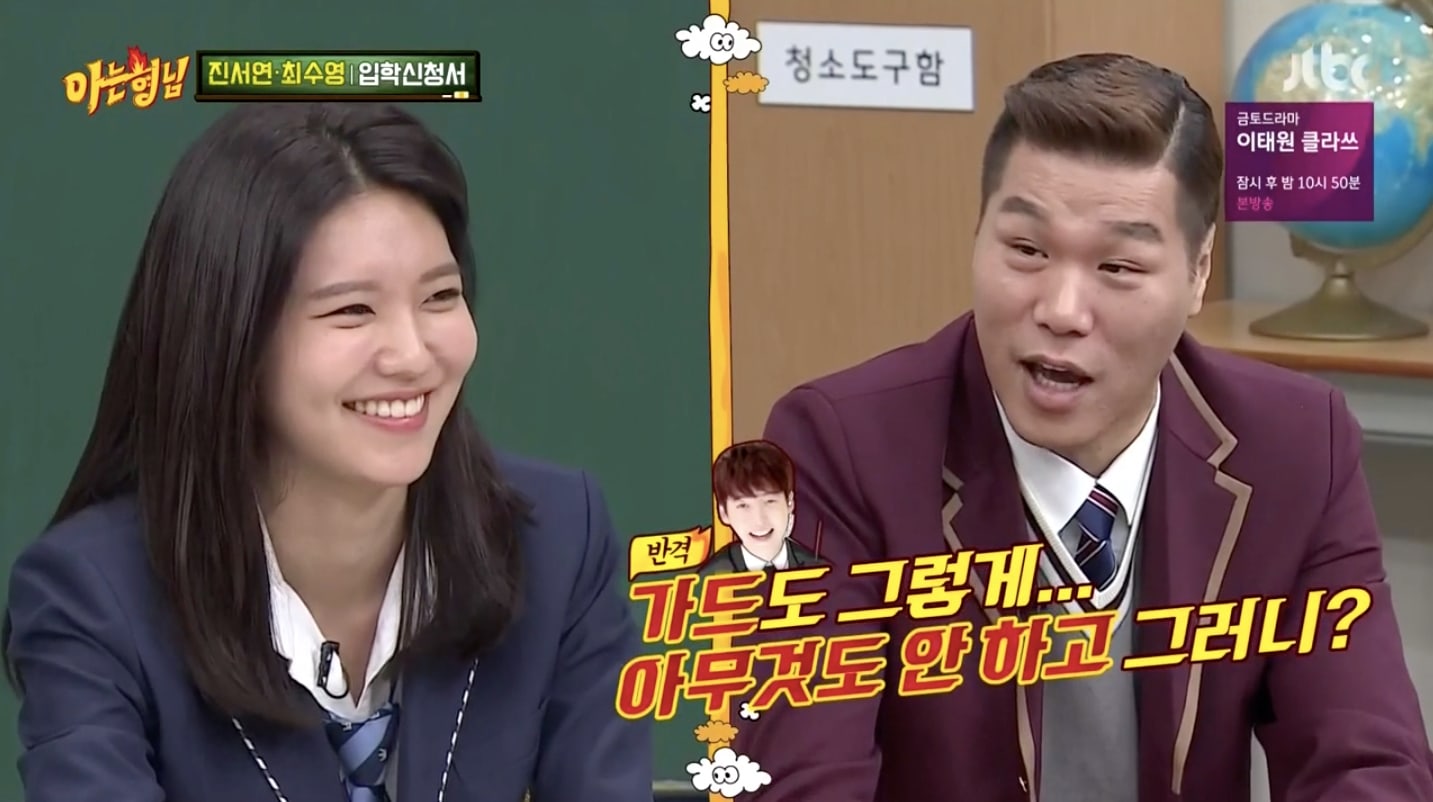 After the two guests had introduced themselves, they ended up playing a game in which Jin Seo Yeon had to guess words and phrases by reading Sooyoung’s lips as she explained them. At one point during the game, Sooyoung paused for a moment and smiled nervously as she pondered how to explain a word, and Jin Seo Yeon misinterpreted her expression and immediately yelled out, “Jung Kyung Ho!”

Although her guess was incorrect, Sooyoung instantly read her lips and couldn’t help bursting into embarrassed laughter along with the entire cast. 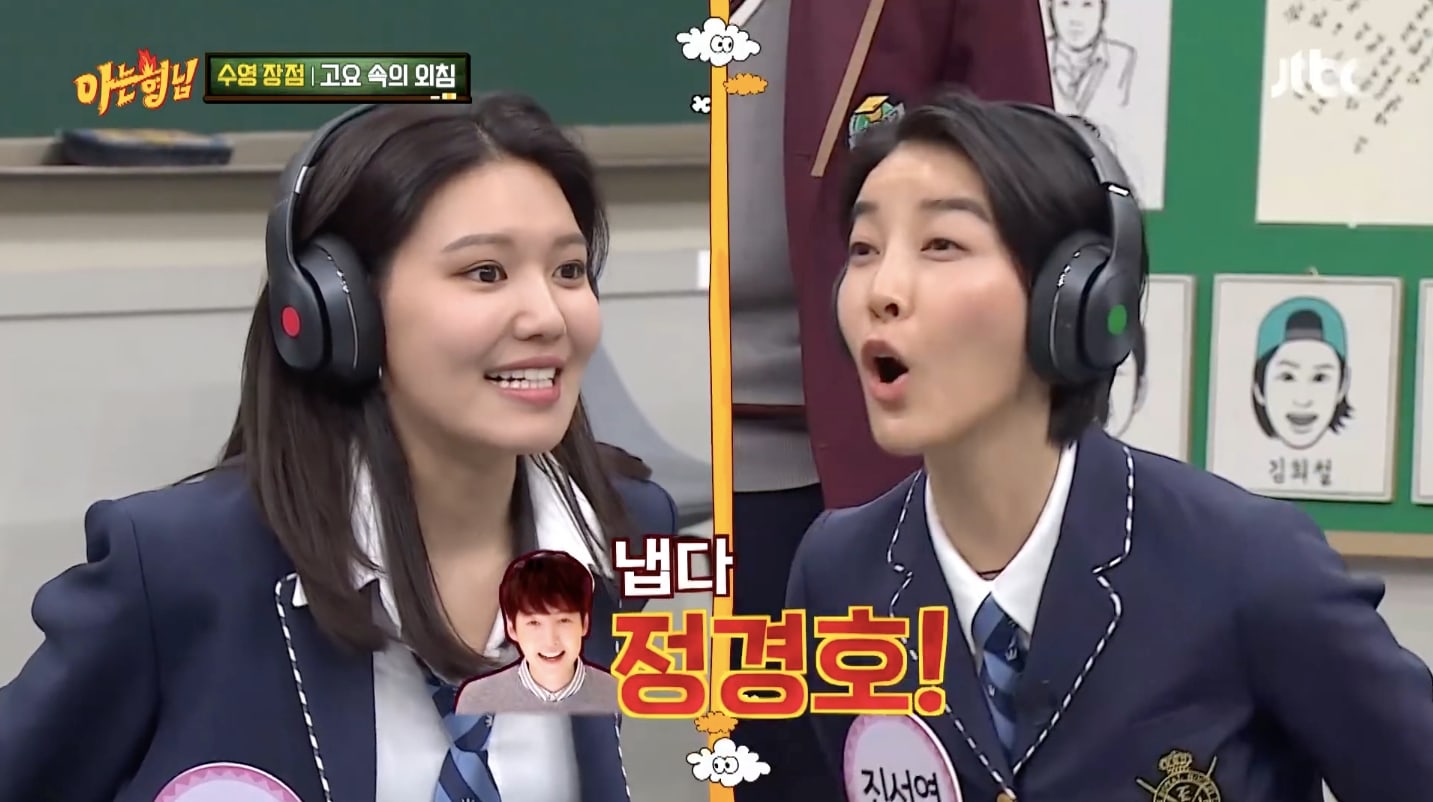 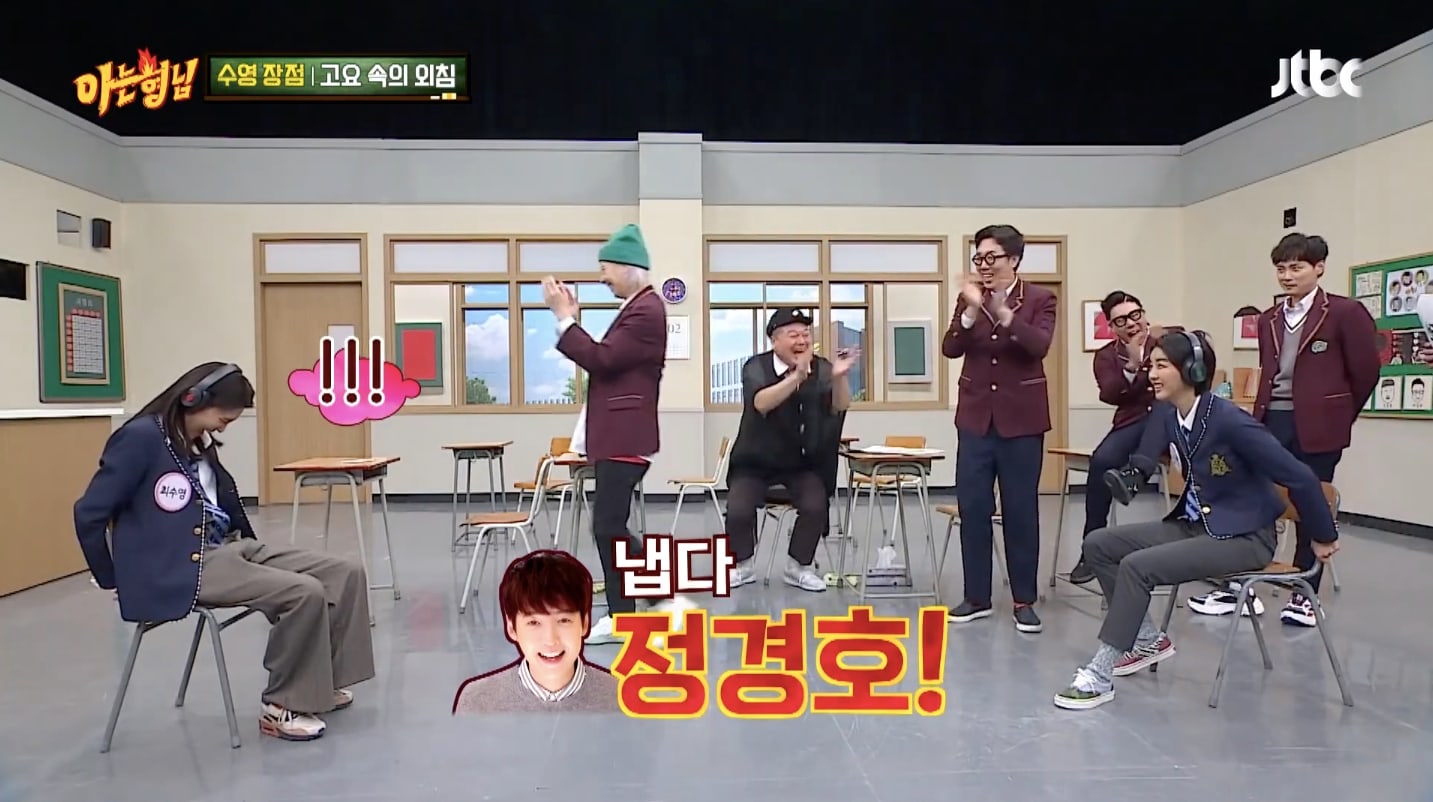 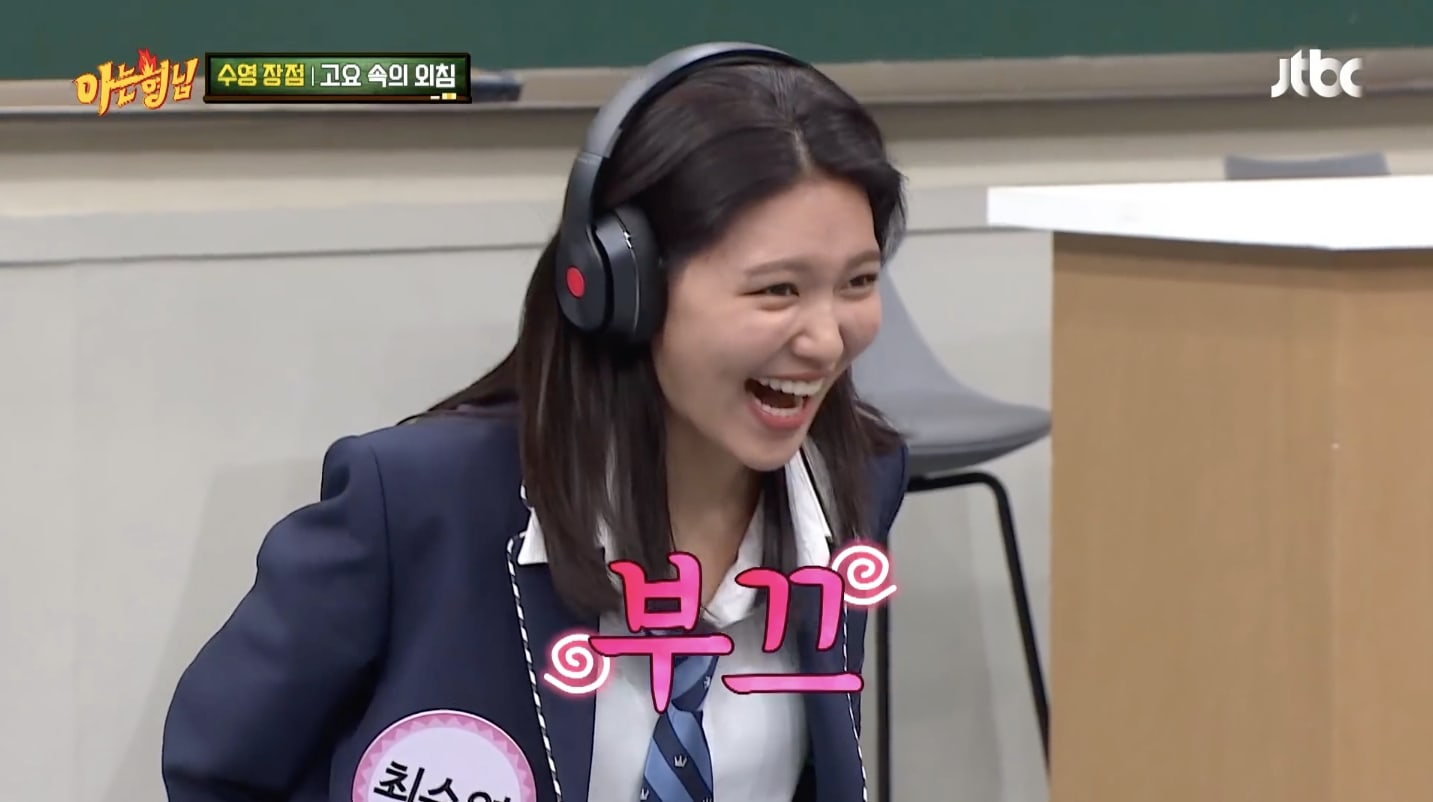 Watch the clip of Sooyoung and Jin Seo Yeon’s game below! (The part where Jin Seo Yeon brings up Jung Kyung Ho starts at 1:22 in the video.)

Check out the first episode of Sooyoung and Jin Seo Yeon’s new drama “Tell Me What You Saw” here:

Girls' Generation
Ask Us Anything
Jung Kyung Ho
Sooyoung
Jin Seo Yeon
How does this article make you feel?