Ku Hye Sun spoke about her divorce with Ahn Jae Hyun and explained some of what she felt during the controversy.

On the February 5 episode of “Night of Real Entertainment,” Ku Hye Sun appeared for her first on-camera interview in a long while. She was volunteering to help rescue dogs that day and she said, “It’s my first time in front of a camera in a long time.” She said that she’d had a hard time sleeping the night before the interview.

Ku Hye Sun, who’s known for being active in many different artistic fields, shared that she’s been focusing on artwork lately as she prepares for an exhibit in April. “Compared to the work I did in the past, I use more color lately and I’ve become a bit more hopeful.” She added, “Since I expressed a lot of anger.” 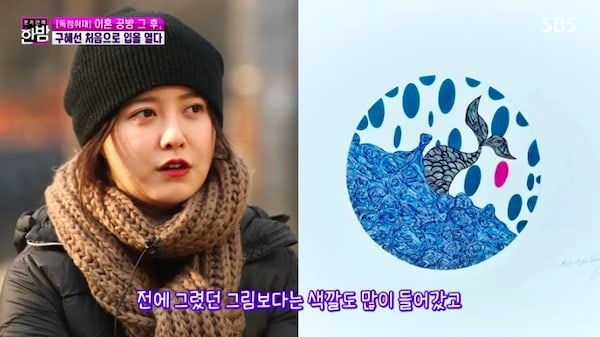 She shared that people around her have been worried and told her not to do an interview now. When asked why she decided to do it, she said, “About my personal history and my family situation, I really have no one to rely on, so I’ve ended up relying on the public. I’ve been thinking that I’ve been childish and I’ve been embarrassed. If I caused people to feel tired, then I’m very sorry about that. I wanted to explain anything that may have been misunderstood. But if I look back, I did what I did because I thought it was the best way then. When one is angry, one doesn’t see anything.” 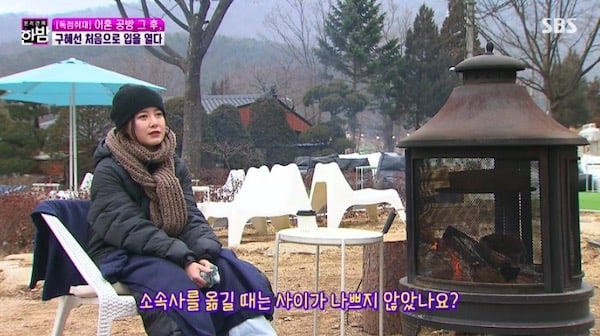 The interviewer pointed out that that most celebrities would talk about such matters through official statements issued by their agencies. Ku Hye Sun explained that the reason she’d used Instagram to speak about their issues was because of her agency situation.

She said, “We were both in the same agency. That put me in a difficult situation. Since my husband had worked with those people for a long time, I had nowhere different that I could share my side. It wasn’t a situation where I could put out a press release through my agency. It was a very private family matter, but my feelings at the time were that I wanted to grasp at straws even if it meant that everything was revealed.” She clarified that when she left the agency, she wasn’t on bad terms with the company.

The interviewer said that usually couples end up divorcing after a period of ennui and fighting, and Ku Hye Sun responded that this hadn’t been the case with them. She shared that she trusted Ahn Jae Hyun so much that at first she had thought he was joking when he suggested divorce. “When I realized it wasn’t a joke later on, I was very angry,” she said.

“Don’t the heart-fluttering feelings end after two or three months?” she said. “I think that you can’t throw a person away just because those feelings go away. I felt a great sense of betrayal because I’d put so much emotion into it. I felt so much hatred.”

She also talked about how she had expressed her feelings on social media, explaining that at the time, it wasn’t important to her that she was a celebrity or that she had a certain job. “I was just a person who, simply as someone’s woman, expressed all the anger that I could,” she said. She added with a laugh, “I used all means available, although it was foolish.”

When asked if she’d tried really hard to remedy the situation, Ku Hye Sun explained, “When I decided to get married, I thought I’d never get a divorce in my life. Even if we fought, we’d solve the issue and make up, and we promised that we’d always be by each other’s side when we’re ill or going through difficulties. So I… everything that’s happened so far doesn’t seem like something I’ve done, it seems like I dreamt it. I feel like I’ve been living a nightmare for six months.” 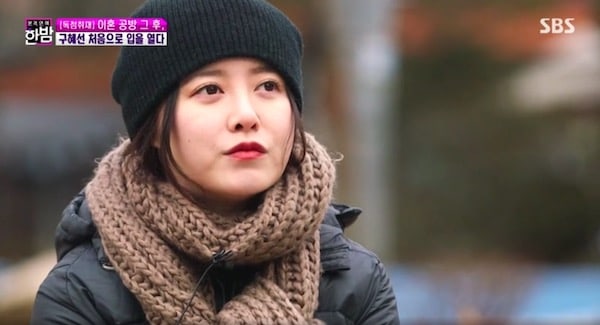 Ku Hye Sun explained that the reason she stopped posting was Ahn Jae Hyun releasing their text messages. She said that when Ahn Jae Hyun had revealed their messages, she came to accept that their relationship wasn’t salvageable. “When I saw [the article with the messages], I realized that I wouldn’t be able to win,” she said. “Couples talk about so much in two years together. But they just picked out our fights and edited it together, and so [to the public] it just looked like, ‘Oh, Ku Hye Sun is nuts.’ [If I were to continue fighting] wouldn’t I also have to fight dirtier too? I thought that it wouldn’t be good to go down that path. My parents were also worried.”

“The thing that I wanted was a conversation,” she said. “I didn’t want [a divorce] so I put up a struggle, but [now] I think that I have to go in the direction that he wants.”

Ku Hye Sun shared that she hasn’t once been in contact with Ahn Jae Hyun since the matter began. “We’ll see each other again at some point,” she said, before adding with a laugh that it could be in court.

She went on to talk about what she’ll do now. When asked if she felt like she’d gotten everything off her chest, she said “I felt upset over the injustice [at the time] but [now] I think that I’m not the only one who feels that way in this world. If I don’t make a fresh start, then I’m just regressing, so I need to put in effort so that I can achieve a good result.”

“When this show is over, I’m going to go straight to London to study language,” she said. “It’s an intensive course where you study from morning to night. I think that for me, studying is the only thing for me that’s going to let in fresh air. I’m going to apply to return to school too.” She added, “In the future, I’m going to do a lot of good work as well.” She then wished the viewers good health and expressed her thanks.

Ku Hye Sun and Ahn Jae Hyun married in May 2016 after starring together in the KBS drama “Blood.” Ku Hye Sun shared via Instagram in August 2019 that Ahn Jae Hyun wanted a divorce, explaining that she was sharing the news ahead of their agency releasing a statement from his side. This led to a very public battle through the media over their marital issues, which created controversy.