Cast Of “War Of Prosecutors” Bids Farewell To Drama Before Finale

The cast members of JTBC’s Monday-Tuesday drama “War of Prosecutors” have said their farewells!

With the drama’s finale approaching, the cast shared their final thoughts on the drama.

Lee Sun Gyun, who played prosecutor Lee Sun Woong, an uncool but cute prosecutor with an upright spirit, said, “Everyone put in a lot of effort. It was fun on set.” He added, “We finished filming a month before the final episode, so I’m definitely watching the last six episodes and the re-runs. I’m using the drama to sooth my sorrows of missing the people I worked with.” Finally, he said, “I’m sincerely thankful to all the viewers who loved ‘War of Prosecutors,'” asking viewers to keep watching until the final episode.

Jung Ryeo Won played the memorable role of prosecutor Cha Myung Joo, who has remarkable talent, a strong sense of responsibility, passion, and self-confidence. She shared, “The script and the directing were like gems, and it was a set with amazing actors that I got along well with. I had an enjoyable time filming. Due to this, I still feel proud and happy even though filming is over. Thank you to all the viewers who’ve watched until the end.”

Lee Sung Jae, who played prosecutor Jo Min Ho, said that it was such a shame that the time to say farewell to the drama had already come. He shared, “It was fun to be able to make an awesome project with good people. I hope all the actors and staff I worked with always stay healthy.” He concluded by thanking all the viewers of the drama who stuck around until the end. 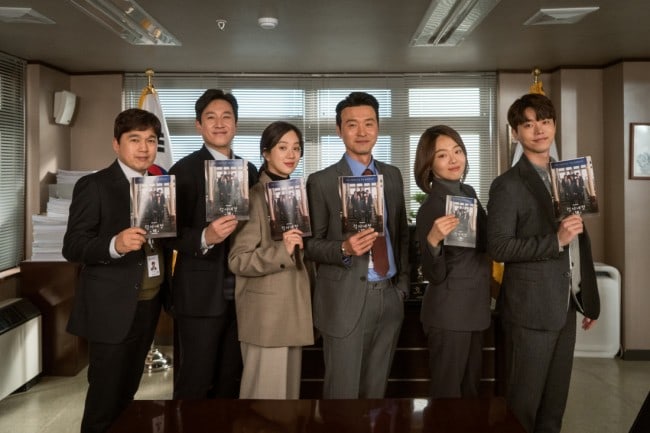 Kim Kwang Gyu, who was in charge of the drama’s humor with his role as the kind chief prosecutor Hong Jong Hak, shared, “I’m sincerely grateful to director Lee Tae Gon, who lead us so well that [our set] was always overflowing with the sound of refreshing laughter, and I’m grateful for the hard work of the warmhearted actors and staff.” He added, “In particular, the two lead actors Lee Sun Gyun and Jung Ryeo Won, who told me about a delicious restaurant in Tongyeong city and always took good care of me like family, [provided] strength during the long-distance countryside filming with their great thoughtfulness.” The actor also expressed his hopes to return with another season while thanking the viewers.

Lee Sang Hee skillfully portrayed Oh Yoon Jin, a prosecutor and working mom. As her farewell statement, she shared, “I met amazing people and was so happy while filming that I can’t express it in words.” She continued to share her affection for the drama by calling it an amazingly enjoyable experience and thanked all the people she worked with.

Finally, Jeon Sung Woo, who was the youngest of the lead actors and played the role of the youngest prosecutor Kim Jung Woo, shared, “During the six months, I worked with good people in an enjoyable and comfortable filming set with a family-like atmosphere. I will remember the happy filming set for a long time, and I think that it will give my heart strength in the future.” He added, “During that time, the staff worked really hard behind the cameras where they weren’t seen, and once again, I sincerely thank the viewers who’ve watched until the end.”