Yoo Jae Suk has completed his first performance as a harpist!

For a project of his program “How Do You Play?,” Yoo Jae Suk appeared on stage for the encore of the “11 O’Clock Concert” at Seoul Arts Center and performed Beethoven’s “Ich liebe dich” on harp with the Korean Symphony Orchestra’s harpist Yoon Hea Soon.

“Ich liebe dich” is originally a song for voice, but conductor Yeo Ja Kyung arranged the song to put more spotlight on harp especially for this project. 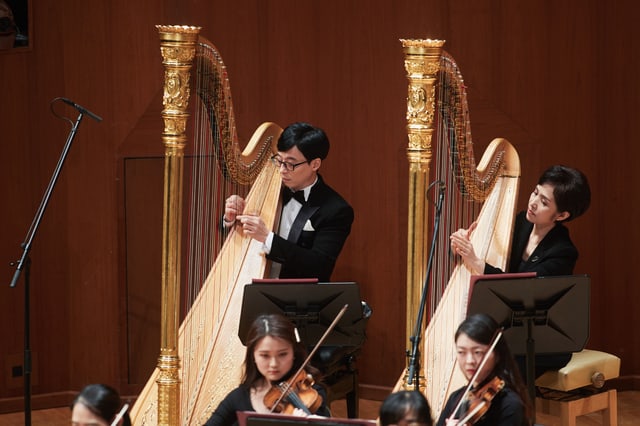 Yoo Jae Suk learned harp for one month from Yoon Hea Soon, and he practiced twice with the orchestra before the performance.

Following the performance, Yoo Jae Suk commented, “I started out without knowing classical music at all, but I will now love and value classical music more,” and added, “I hope there will be many people who want to learn harp after watching the broadcast.”

Yoo Jae Suk is participating in a classical performance as a harpist!

Earlier in the week, the comedian was photographed practicing harp at Seoul Arts Center, which many speculated as a mission for “How Do You Play?,” his variety show with PD Kim Tae Ho.

It has now been reported that Yoo Jae Suk will be performing harp for one song with the Korean Symphony Orchestra at the “11 O’Clock Concert” on February 13.

In response to the reports, the “How Do You Play?” production team confirmed, “Yoo Jae Suk will take the stage as a harpist for a classical performance at the Seoul Arts Center this morning.”

Watch the previous episode of the show below: