Watch: WINNER Hits You With That “DDU-DU DDU-DU” In BLACKPINK Cover + Shares Thoughts On Making Music And More

The group recently wrapped up their “CROSS TOUR” that included them performing stops in Seoul, Taipei, Jakarta, Macau, Bangkok, and more. Unfortunately, they had to cancel their encore concerts in Seoul due to concerns about the possible spread of coronavirus.

The shows had been planned for February 14 and 15, and so they held a V Live broadcast on February 14 for their fans. They first talked about preparing for their encore concert, and one of the keywords was “practice room.”

Kang Seung Yoon said, “Song Mino and I worked really hard at dancing in the band practice room.” The members moved fans when they sang four songs live, with fans joking in the comments that it was like a concert with 570,000 audience members. 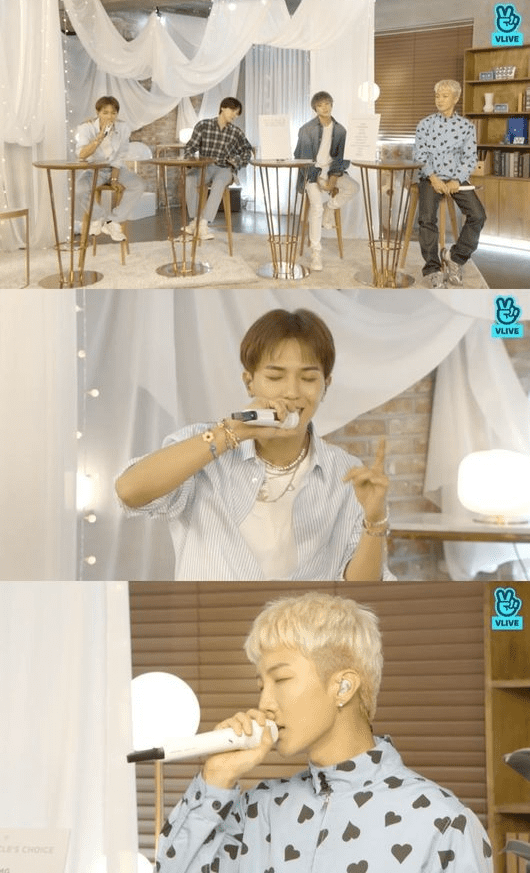 In a video, Lee Seung Hoon recalled their debut performance. “Our song sounded so slow to me,” he said. “I think I was really nervous because it was a moment I’d dreamt of so much, so it sounded like it was slowed down.”

Kim Jin Woo mentioned that “Empty” was the first music video they filmed, and it had been very difficult as shooting had gone on throughout the night over a whole week. Song Mino commented that WINNER always came together with mutual understanding while going through tough times.

Kim Jin Woo said, “We got a lot of support from fans and felt healing while we were performing on tour.” Lee Seung Hoon added, “Whenever we’re working on an album, I’m driven to show fans a good performance.” 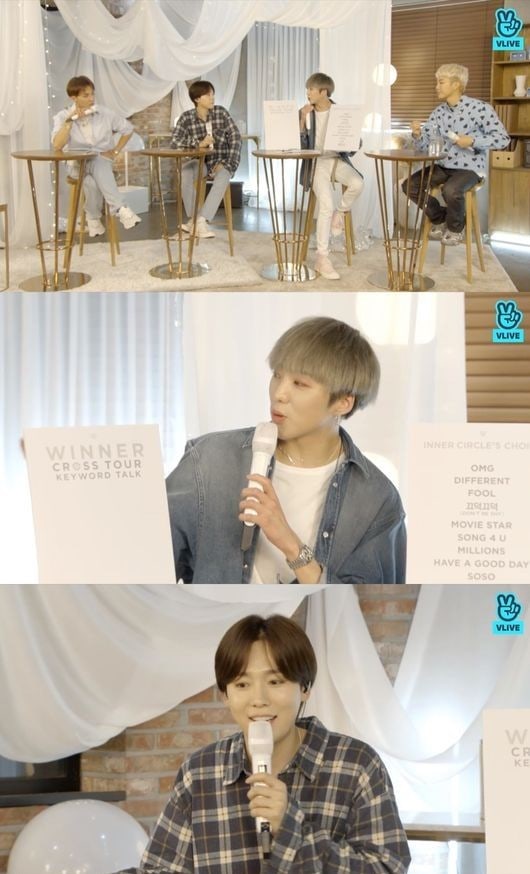 The members also talked about their music. Kim Jin Woo explained, “Songs feel like another ‘me.’ I’m not able to counsel people or give them comfort. But I realized that I’m able to comfort people by singing, and I like that.”

Lee Seung Hoon said, “What I feel now is that I’m the happiest when I’m singing and dancing on stage.” Song Mino commented, “I think I make music because it’s fun and something that I want to do. Having fans and people who are looking out for me makes me work a bit harder.”

Kang Seung Yoon shared, “I like singing songs more than listening to them, and I like making them even more. I think I’m working harder for my own stability and healing. I’m going to keep putting my all into singing.”

During the V Live, the guys also performed a cover of BLACKPINK’s “DDU-DU DDU-DU.” They’d first performed the cover at their Bangkok concert.

After they put on the performance, Lee Seung Hoon explained, “We specially prepared that performance for the Bangkok concert because Lisa is from Thailand.” Kang Seung Yoon shared that they’d recorded the song with a band arrangement that was adjusted for their own key, and he revealed that it had been Lee Seung Hoon’s idea. “I was against it at first,” admitted Kang Seung Yoon. “But in the end I worked hard on it together with them.”

Lee Seung Hoon said, “Seung Yoon worked on it even harder.” Kang Seung Yoon shared, “After we did it, I was really glad that we’d done it. I thought, ‘Of course, that’s Lee Seung Hoon for you.'”

Watch their cover below!