IU’s new OST for tvN’s “Crash Landing on You” is already dominating the charts!

The song, “I Give You My Heart,” was released on February 15 at 6 p.m. KST. In less than three hours, the song had risen to the top of realtime music charts such as Melon, Genie, Bugs, and Soribada. It has also charted within the Top 5 on Flo’s realtime chart. 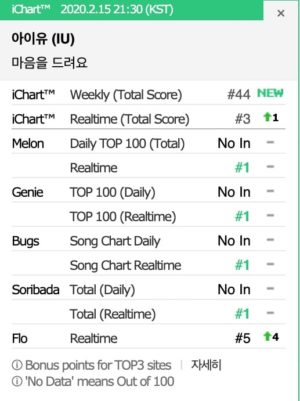 Although IU had sung an OST for her drama “Hotel Del Luna,” it was never officially released as part of the soundtrack, making “I Give You My Heart” her first official OST release in nine years.

Meanwhile, “Crash Landing on You” is set to air its final episode on February 16.

IU
Crash Landing On You
How does this article make you feel?