Joo Ji Hoon is ready to drop jaws with his new role as the ruthless lawyer Yoon Hee Jae!

“Hyena” is about the fierce competition between lawyers who use their knowledge of the law to pursue their ambitions for money. Joo Ji Hoon portrays Yoon Hee Jae, a lawyer who has enjoyed success and an elite life. He is full of pride and confidence as the ace of Korea’s most powerful law firm Song & Kim.

In the new stills, Yoon Hee Jae is wearing a sleek suit that embodies his perfectionist character, and his expression and posture exudes confidence. He breaks through a crowd of reporters and heads into the courthouse. The public attention of his case shows his high position as an ace lawyer.

The production crew said, “Yoon Hee Jae is the top elite of the elite lawyers. The scene of his first appearance will overwhelm viewers as Yoon Hee Jae’s abilities and position combines with actor Joo Ji Hoon’s aura. Please watch how perfect lawyer Yoon Hee Jae will change when he meets Jung Geum Ja [Kim Hye Soo], who has lived a life opposite of his.” 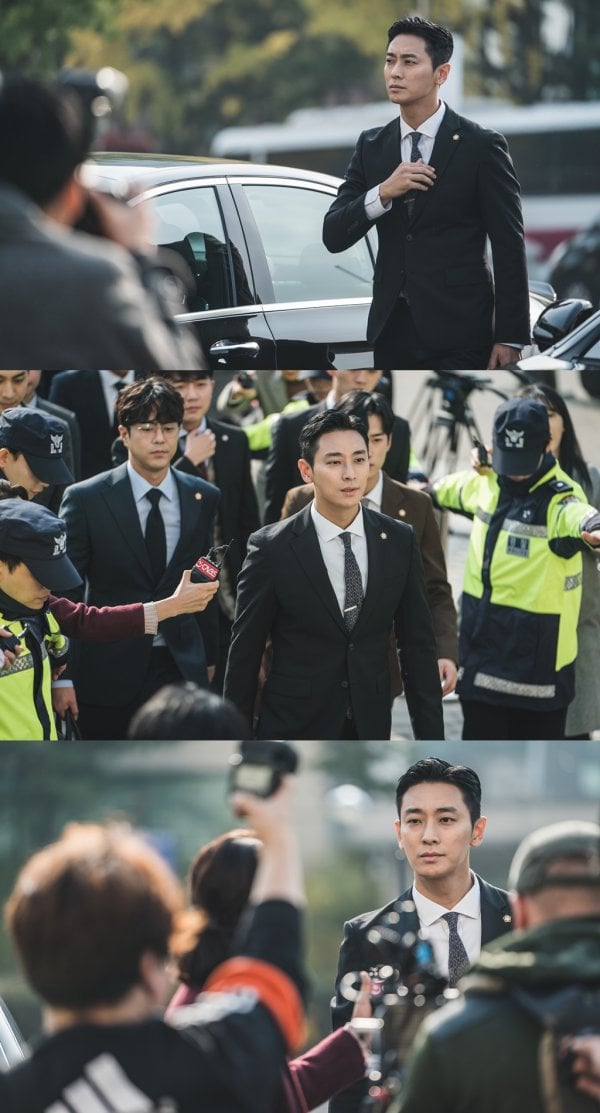 First, the actor said, “‘Hyena’ appears to be a legal drama, but it is not a drama that is tied to the courts alone. It’s a serious but humorous drama, and it’s also sincere but not heavy, so I think viewers will enjoy it.” He shared that the people he would be working with was one of the reasons why he didn’t hesitate to accept the role. He commented, “There’s Kim Hye Soo as well as producing director [PD] Jang Tae Yoo, so there was no reason not to [star in it].”

The second reason why Joo Ji Hoon was drawn to the drama was because of his character Yoon Hee Jae. The actor explained, “Yoon Hee Jae is considered a top elite in the legal profession, but you can’t tell if he’s a hyena or a dog, and if he’s a dog, you don’t know if he’s a small one or a big one. I thought that was charming.”

Last but not least, Joo Ji Hoon expressed his excitement about working with PD Jang Tae Yoo. Joo Ji Hoon said, “Rather than thinking, ‘I want to show this side of me,’ I’m curious and excited about what kind of side the director will bring out of me.”

PD Jang Tae Yoo is a famous director who produced many works such as “Painter of the Wind,” “Tree with Deep Roots,” and “My Love From the Star.”

In the meantime, start watching Joo Ji Hoon in his latest drama “The Item” here:

Joo Ji Hoon
Hyena
How does this article make you feel?