“Hi Bye, Mama” Shares 4 Things To Look Forward To Ahead Of Premiere

The premiere of “Hi Bye, Mama” is just hours away!

The new tvN drama is about a woman named Cha Yu Ri (played by Kim Tae Hee), who, after passing away in a tragic accident, is able to return to her husband Jo Kang Hwa (played by Lee Kyu Hyung) and daughter for 49 days as a ghost.

Here are four key points to hype up your interest for the upcoming first episode:

Yoo Jae Won was greatly loved for his directing of dramas, such as “Oh My Ghostess” and “Tomorrow With You,” while Kwon Hye Joo gained popularity through her drama “Go Back Couple.” These two will work on “Hi Bye, Mama” with great detail and warm emotions to deliver laughter and sympathy to the viewers.

The synergy between Kim Tae Hee, who returns to the small screen after five years, and Lee Kyu Kyung, who has outstanding character immersion, will amplify the empathy and comedy in the drama. Kim Tae Hee will make a complete transformation into a ghost mother who haunts the world with pain from never having hugged her child before, while Lee Kyu Hyung will move hearts as a cardiothoriac surgeon who tries to overcome the pain of losing his wife and become happy again.

“Hi Bye, Mama” borrows some of the most Korean subjects, including ghosts and reincarnation, to create a story of life and people that everyone can relate to. Viewers will be able to experience the loss and pain of those who have lost their family members.

The production crew said, “The real 49-day reincarnation story of a ghost mom will warm the viewers with the daily lives of ghosts who are more humane than humans. It will deliver a small but warm consolation to someone who has experienced loss as well as offer pleasant laughter that everyone can relate to. It will be a time to look back on something precious.”

The enthusiastic performances of professional actors, who will double the reality and empathy, make the waiting for the first episode even more enjoyable. In particular, the ghost family will be in charge of empathy and laughter, and the production crew’s trust in the actors is also absolute. Yoo Jae Won commented, “A large number of skillful actors will appear. It will be fun to see characters with their own personalities.”

All the supporting characters come from different backgrounds and will have their own story. Yoon Sa Bong plays Mi Dong Daek, a mudang (shaman) who manages ghosts, Ban Hyo Jung takes the role of Grandmother Jung, who can’t pass on due to concerns about her family, and Bae Hae Sun portrays Sung Mi Ja, who continues to take care of her in-laws’ house despite being buried somewhere else. Park Eun Hye, Kim Dae Gon, and Shin Soo Yeon play the ghosts of Jang Pil Seung’s family, unable to pass on because they feel like they are leaving him alone. 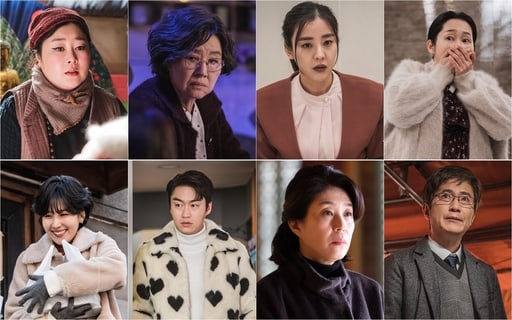 Are you excited for the premiere of “Hi Bye, Mama”?