“Dr. Romantic 2” Episode Ending Scenes That Left Viewers In Tears And In Shock

With just two episodes left, the SBS drama took a look back at some of its most impactful endings that moved viewers to tears or left them speechless with plot twists.

In episode 13, Seo Woo Jin (played by Ahn Hyo Seop) bid farewell to Kim Sa Bu (played by Han Suk Kyu). After being threatened by gang members about Kim Sa Bu’s safety, Seo Woo Jin made the difficult decision to leave Dol Dam Hospital. Saying a tearful goodbye to his mentor, he also brought tears to the eyes of Kim Sa Bu. Seo Woo Jin was forced to sign a contract to another hospital after private loan lenders made violent threats against Kim Sa Bu.

Seeing Kim Sa Bu across the hallway, Seo Woo Jin walked towards him and solemnly stated, “I think I’m going to have to go to a different hospital.” After saying that he praised himself for the first time for enduring a difficult life, he adds, “I was able to meet Kim Sa Bu because I didn’t give up. It wasn’t a long period of time, but I was thankful.”

Kim Sa Bu appeared startled by the sudden goodbye, and viewers were left heartbroken seeing the possible end of Seo Woo Jin and Kim Sa Bu’s relationship that had formed through mutual respect, trust, and admiration. 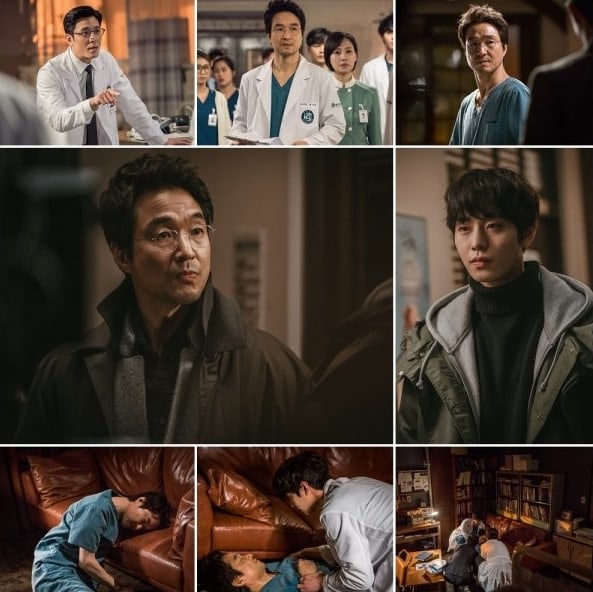 In episode seven, Kim Sa Bu spoke out about the dirty logic used by Park Min Kook (played by Kim Joo Heon) to achieve fame and prestige and criticizes his emphasis on blindly following rules.

Kim Sa Bu left a strong impression on viewers when he reached his boiling point. He shouted at Park Min Kook who only chased fame and prestige through twisted logic and did not stand up for Cha Eun Jae (played by Lee Sung Kyung) who was attacked while helping a victim of domestic violence.

Park Min Kook continued to infuriate him by refusing to accept a prisoner serving a life sentence into the emergency room. When he began airing his excuses about his desire to run the hospital safely, a man walked into the emergency room while bleeding from his neck after getting stabbed by his wife. This man eventually died due to cardiac arrest.

Kim Sa Bu pointedly said to Park Min Kook, “Rules? What a joke. You’re just sparing yourself because you think it’s going to harm you.”

In episode 10, Seo Woo Jin urgently knocked on the door of Kim Sa Bu’s office after seeing him pass out on the floor.

Kim Sa Bu was injured from the bus rollover accident, but he continued to operate on other patients before finally losing consciousness in his office.

Seo Woo Jin was walking by his office when he peered inside after hearing a thump. Seeing the doctor on the floor, he shouted his name while knocking on the door. He stormed inside, shook the doctor, and found the blood-covered injury on the side of his stomach. He was quickly joined by Bae Moon Jung (played by Shin Dong Wook) and Oh Myung Shim (played by Jin Kyung) who momentarily froze due to the shock of seeing Kim Sa Bu in this state.