A reporter has made the claim that Roy Kim was wrongly accused of his involvement in the group chatroom involving Jung Joon Young, Choi Jong Hoon, and more.

During the February 24 episode of Channel A show “Rumor Has It” (tentative title), an entertainment news reporter stated, “Of celebrities who are reflecting on their actions, there are those who have done wrong, but there are also those who are in unfortunate situations.” The reporter stated, “I believe Roy Kim is one of those celebrities. He was investigated for spreading pornographic material. This is something that has never been reported in the media, but Roy Kim was part of a fishing chatroom with Jung Joon Young and Choi Joong Hoon. Where they really just talked about catching fish.”

She went on to state, “There was an instance of a photoshopped pornographic image of a celebrity being shared in the chatroom. Roy Kim took a screenshot of a blog image and posted it saying, ‘This is not that person,’ and that is what he was charged for. So Roy Kim had posted the photo, not for others to see, but to state that it was a photoshopped image, and that is what got him charged for spreading pornographic material.”

The reporter continued to add, “Though he was not penalized at the time, just the fact that he was investigated caused severe damage to his image. So he’s unable to be active as a singer till now, and I just wanted to make sure this story was told.” 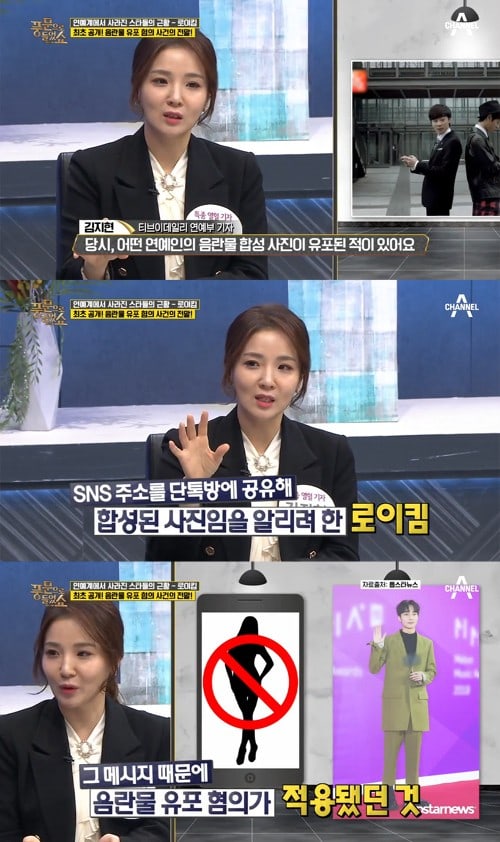 On February 25, Stone Music Entertainment released a statement regarding Roy Kim, which reads as follows:

Hello, this is Stone Music Entertainment.

Last April, our label artist Roy Kim was investigated by the police on charges of spreading pornographic material, and a final decision of a suspension of indictment has been made on his case. We wish to sincerely apologize to those who have been disappointed by the bad news, and to the fans who have waited for a long time.

Roy Kim fully complied with the police investigation, and during the process, it was confirmed that in 2016, Roy Kim took a screenshot of a blog image with his phone and shared it in a KakaoTalk chatroom.

Roy Kim is deeply regretting and reflecting on his ignorance of not knowing that, regardless of intention, this was an act of spreading pornographic material.

However, we would like to emphasize that the KakaoTalk chatroom that Roy Kim was a part of was a different chatroom from the one that has become an issue.

Roy Kim will do his best to be a model citizen with a humble attitude. Once again, we apologize.

Roy Kim
Rumor Has It
How does this article make you feel?