On the February 27 broadcast, Weki Meki appeared as guests on the radio show hosted by B1A4’s Sandeul.

Weki Meki then chose Kim Doyeon and Lua as the fastest and slowest members to memorize the choreography, respectively. Lua commented, “I’m standing still, but all of the members are moving. That’s when it gets awkward.”

Elly dyed her hair bright blue for this comeback. “It’s a hairstyle that was created by bleaching already bleached hair,” she said. “I just go about my day now if my hair breaks off.” Lucy added, “My hair was black since the third album, but I dyed it blonde this time.” Choi Yoojung also showed off her violet-colored hair. 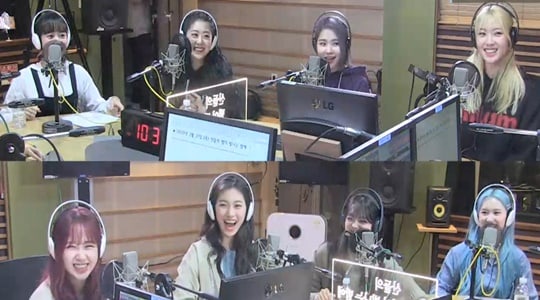 Sandeul then asked, “There was a six-month hiatus before the comeback. I’m curious as to what you guys did.” Choi Yoojung replied, “My parents run a pork cutlet restaurant. My parents told me to visit with the members, so I went with Lucy and Elly. I was a trainee since I was young, so I didn’t have experience working part time. It was my first time working a part-time job, and it was so much fun.” Lucy added, “I felt regretful that we went towards closing time. We should’ve gone when they were busy to help them out.”

Wek Meki then said, “We all went on an MT (bonding trip) to Gapyeong. We brought along our mothers, and it was really nice.” Rina commented, “I heard that the mothers got close, so I think we’re going to go every quarter.”

Speaking confidently about her cooking skills, Choi Yoojung said, “I made stir-fried octopus for the members.” Kim Doyeon added, “I also like to cook because I want to eat deliciously even if I’m eating a simple meal.” The members further revealed, “We’re eating salad and almond milk these days to watch our weight.”

The girl group concluded, “We’re gathering members for our official fan club until April 30. We hope many people will come.”

Weki Meki
Sandeul's Starry Night
How does this article make you feel?