2PM’s Wooyoung celebrated his military discharge with a V Live broadcast on February 28!

Wooyoung, who held the broadcast in his uniform, said, “I don’t know where to start. This is hard. Everyone, I’ve officially been discharged as of February 28, 2020. I’m both happy and sad. I wanted to greet everyone with a big smile, but I don’t want people to think that I’m taking the [current situation] lightly.”

He explained, “On orders from the Ministry of Defense, I didn’t return to base after leave, and instead was discharged while off-base. I wish I could’ve said goodbye to my fellow soldiers and the officers.”

Wooyoung continued, “I hate COVID-19. I want to break everything. It’s ridiculous. I’m sure you all are upset and feeling down, but you have to get through it. Let’s get through it together. We’re going to win.”

The 2PM member took time to answer some questions from fans. When asked who he thought of most while in the military, Wooyoung said, “I thought of fans a lot, and also thought I should be better to my parents. I thought of the [2PM] members and people I’m thankful for. I looked back on my 20s and moments that could have been better.”

“What I thought of most was our fans. I received so many letters and gifts. I want to take this moment to say thank you to everyone. I wanted to do it personally in front of fans, but I’m sad because I couldn’t. I have to say it through V Live, but I’ll express my thanks more in the future.”

He revealed that he met up with the 2PM members whenever he was on leave. “Jun. K was in the same area as me, so we saw each other often. Whenever we were both off-base at the same time, we met up. I wasn’t able to see Taecyeon too often, but he has been really busy since being discharged. Nichkhun lives close to where I do, so we’d see each other in passing in the parking lot.”

Jun. K and Nichkhun then surprised Wooyoung during the broadcast, suddenly appearing on set. Nichkhun said, “We can see each other a lot now, right?” 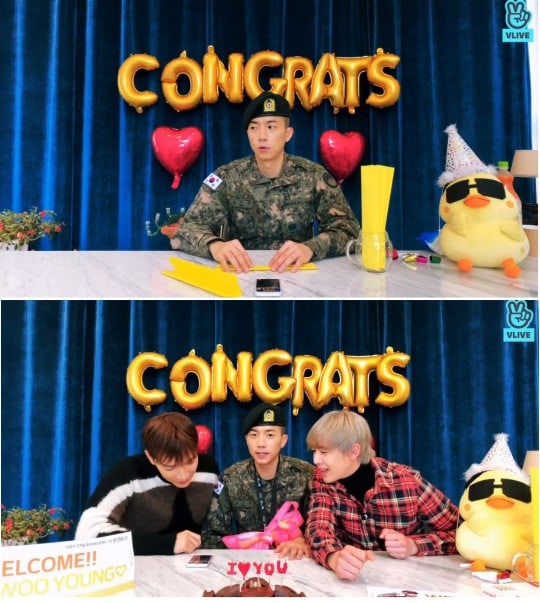 2PM
Nichkhun
Wooyoung
Jun. K
How does this article make you feel?