Valentine’s Day may be long in the past, but sweet romance is still in the air on KBS’s Wednesday-Thursday drama “Forest!”

“Forest” tells the story of an emergency services worker with memory issues (Park Hae Jin) and a passionate young surgeon (Jo Bo Ah), who are drawn to each other in a mysterious forest as they uncover the truth behind their shared past.

Park Hae Jin’s character, Kang San Hyeok, and Jo Bo Ah’s character, Jung Young Jae, originally had a confrontational chemistry, pretending to have no interest in each other and picking fights, but they eventually learned about each other’s sincere feelings and became lovers.

Last episode, Kang San Hyeok suffered after he remembered the time when he was abandoned by his mother at ten years old. But when Jung Young Jae stayed by his side without a word, Kang San Hyeok could no longer hide his feelings for her and confessed everything he had been hiding until then. Jung Young Jae, although afraid of a future in which things don’t work out, accepted his sincere feelings and the two shared a kiss.

In new stills released by “Forest,” the two of them go on a proper date at a shopping mall. Kang San Hyeok looks down on Jung Young Jae with a sweet and caring expression, while Jung Young Jae is overflowing with happiness. 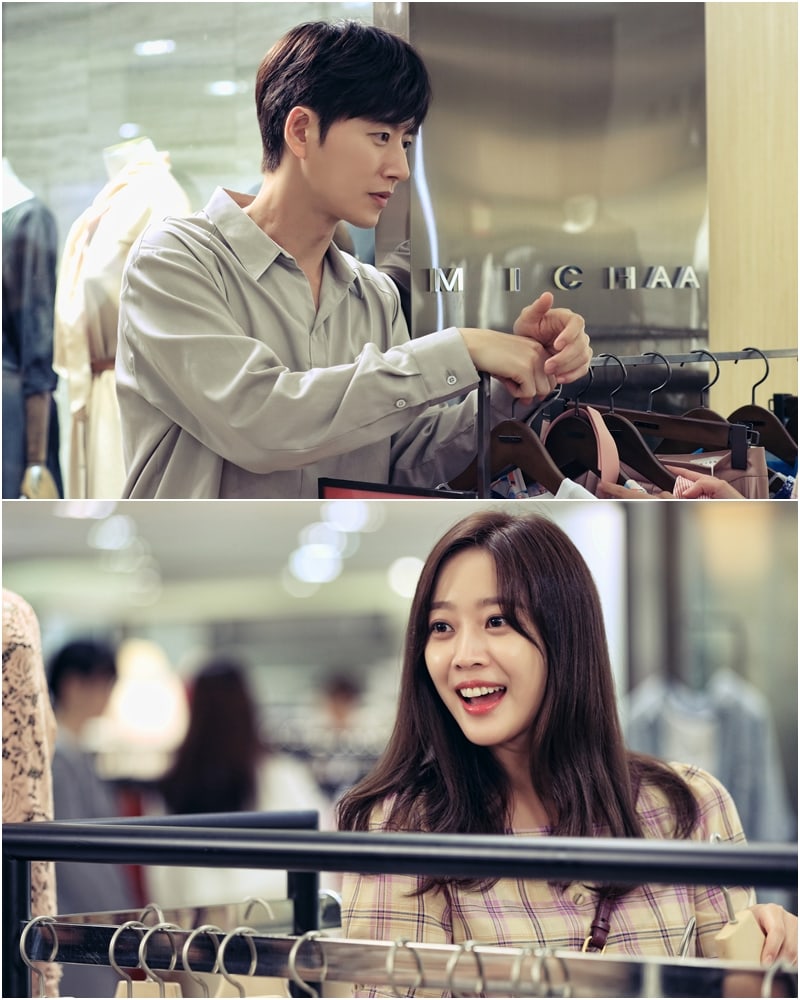 This scene was filmed at a mall in the Yeongdeungpo neighborhood in Seoul. When the two actors arrived on set, they passed the time while the cameras were being set up to joke around with each other and raise the atmosphere on set. When Park Hae Jin discovered a brand being sold at the mall, he sang a song from a TV commercial and asked Jo Bo Ah and staff members to identify it. Even after filming began, he would crack jokes about retro trends from the past.

The production staff stated, “After Park Hae Jin and Jo Bo Ah’s characters began dating in the show, their characters changed as a matter of course, and the two actors got to show their true bright and happy energy on camera. The sweet ‘sesame rice puff’ couple’s refreshing and sweet romance will bring a happy energy to viewers.”

Check out the latest episode of “Forest” below!