tvN’s weekend drama “Hi Bye, Mama” has been creating lots of buzz with its touching plot.

“Hi Bye, Mama” tells the story of a woman named Cha Yu Ri (Kim Tae Hee), who dies in a tragic accident but is able to return to her family for 49 days.

Cha Yu Ri is a loving wife to her husband Jo Kang Hwa (Lee Kyu Hyung), a precious daughter to her parents, a dear friend to her acquaintances, and the only mother of her daughter Jo Seo Woo (Seo Woo Jin). As viewers watch her life play on the small screen, they can’t help but feel sorry for her fate that is between life and death.

Here are some reasons why viewers are charmed by the lovable Cha Yu Ri:

In the latest episode, Cha Yu Ri faced a difficult situation when she reunited with her close friends Go Hyun Jung (Shin Dong Mi) and Gye Geun Sang (Oh Eui Sik). Cha Yu Ri and Go Hyun Jung burst into tears in each other’s arms as they expressed their longing for each other. Not only does Cha Yu Ri cry for her friends, but her family members as well—especially her precious daughter. This image of Cha Yu Ri gives a clear idea of how much love and faith she had exchanged with precious people in her lifetime. 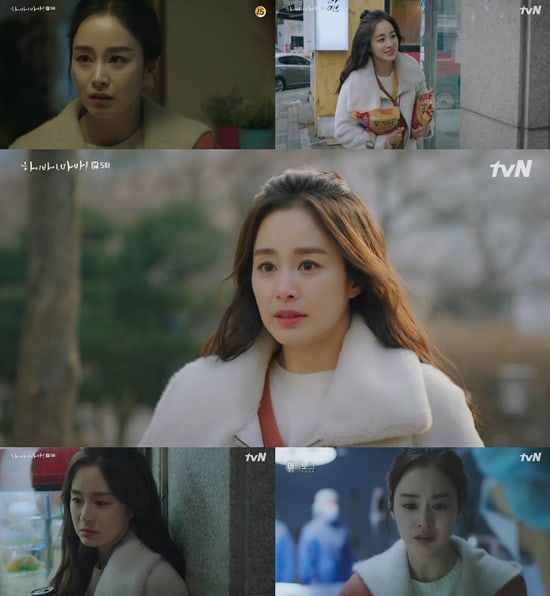 Kim Tae Hee drew attention by maximizing the strong and bright image of Cha Yu Ri by never losing her smile in the face of the sad reality. In particular, her tireless efforts to protect her daughter at all times bring smiles to viewers’ faces. In particular, she used red beans and bells to expel ghosts from Jo Seo Woo’s kindergarten and even secretly put red beans in her backpack to keep her safe. In addition, her comical actions, such as running into a door and getting a bloody nose from attempting to secretly bring a pink doll to Jo Seo Woo, make her even more lovable.

Cha Yu Ri also showed feelings of anguish and sadness that were hidden behind her positive image. Instead of being jealous of her husband Jo Kang Hwa’s new wife Oh Min Jung (Go Bo Gyeol), she gazes at her with warm eyes. Cha Yu Ri also drew sympathy from the viewers when she blamed herself for not knowing Jo Seo Woo was allergic to strawberries.

Are you enjoying the drama so far?