On his Instagram Stories, Jung Chan Sung made further comments regarding Brian Ortega hitting Jay Park. He said, “Since I’ve joined AOMG, Jay Park hasn’t once told me to trash talk. I don’t know certain words [in English] so I’ve asked him before, but Jay Park doesn’t concern himself with every little thing. He just quietly supports me. And what do you mean, I used Jay Park [getting hit] as a marketing tactic? I’m just so mad I wasn’t able to protect him.” 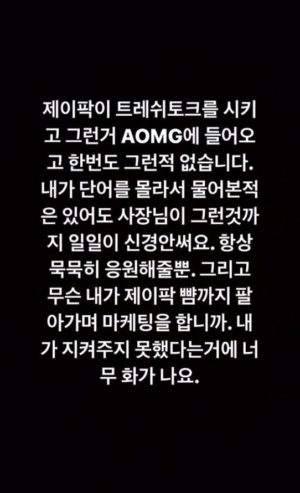 He later added a post, written in English, “I’m positive Jay Park could have defended himself and fought back, but Ortega is a professional UFC fighter who’s ranked at second place world wide. Jay Park is only a civilian. He waited for me to leave Jay Park by himself to attack him and ran off! I’m really curious to see if his behavior is acceptable in American and Mexican culture? How are people not seeing how wrong this is?” 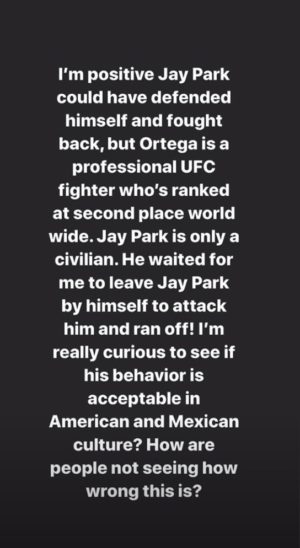 On the afternoon of March 9, a source from Jay Park’s agency shared, “The artist, as he stated through his social media account, does not wish to sue [Brian Ortega] separately in addition to the case that was already reported to the police at the scene. We will therefore take no separate legal measures.”

Several hours after Brian Ortega’s attack, Jay Park had a Q&A session on his Twitter account and answered a question asking if he was going to sue the fighter. Read his post below:

Nah i dont sue ppl who have less than i do https://t.co/HlwnBIffgj

Park told me Ortega went up to him while Korean Zombie went to the bathroom and asked if he was Jay Park. Park said yes and, according to Park, Ortega slapped open palm slapped him.

Following the show, Brian Ortega warned Jay Park in an Instagram comment, saying he would slap him if he saw him.

On March 9, after the UFC 248, a source from Jay Park and Jung Chan Sung’s agency AOMG said, “It is true that Ortega picked a fight, but security quickly pulled [Ortega] away, and the situation was over. Many people are worried, but [Jay Park] was not injured, and there are currently no issues with his health.”

The same day, Jung Chan Sung took to his Instagram to express his anger about the situation.

Last night, you sat 10 meters away from me and Jay Park. For two hours nothing happened, so I thought everything was fine. But you fucking attacked Jay Park while I went to the bathroom. Jay Park is not a professional fighter but a musician. You slapped a civilian who merely helped translate. Even worse, you were sitting there waiting until I would be absent and attacked Jay Park. It was not a fight like real men would do. What you have done is same as a grown up to beat a child. You should have attacked me. If so, I would have not been upset. You are such a coward for slapping a musician not a fighter. If you fucking planned this to fight me and to use my name because people
don't remember your name anymore, then I congratulate you, it worked. I will fight you and I will knock you out and your fucking face will be bloody. Now, your fucking face stays in my mind and I will fuck you up in the cage. I hope you won’t run away from me again.

Jung Chan Sung is the first athlete to sign with AOMG, a hip hop label founded by Jay Park.