ITZY returned with an exciting music video for their comeback track “WANNABE”!

The five-member monster rookie group released their new mini album “IT’z ME” on March 9 at 6 p.m. KST, featuring the title track “WANNABE.” Soon after its release, hashtags celebrating their comeback took over the top three spots on Twitter’s worldwide trends! The hashtags were #ITZY_WANNABE, #ITZY_COMEBACK, and #ITZY_ITzME and member Ryujin’s name also trended in the top 10. 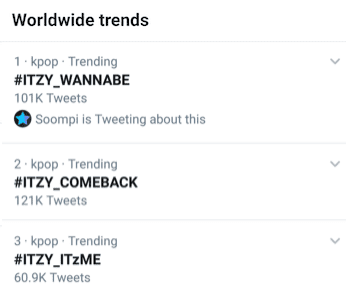 ITZY’s fans MIDZY have been sharing their favorite moments from the MV and showcasing how each of the members really brought it in this new video.

i don’t think you understand how cute Lia is in this scene#ITZY_ITzME #ITZY_WANNABEpic.twitter.com/HWvPfQDDyZ

the way yuna serves this hard at the age of 16…. it amazes me #ITZY_Wannabe pic.twitter.com/ZclZn11lAi

The members also killed the choreography for the track and fans are wowed by their moves.

if i do this it will dislocate my shoulders for sure #ITZY_WANNABE pic.twitter.com/EjnwnfoWhh

And their fashion and hairstyles in the MV have got everyone amazed!

ryujin said fuck going to the hairdresser. just cut your own hair. pic.twitter.com/o2QMXO05zE

What do you think of ITZY’s new MV?

Soompi Spotlight
ITZY
How does this article make you feel?