Former Rainbow member Jisook revealed what made her choose to appear on MBC’s “Don’t Be Jealous”!

“Don’t Be Jealous” features celebrity couples, documenting their love stories and everyday lives, looking into their thoughts on dating, love, and even marriage. The show is hosted by Jang Sung Kyu, Jang Do Yeon, and former basketball star Heo Jae.

During the March 9 premiere of the program, Jisook introduced her boyfriend by saying, “He’s a programmer who runs a coding training company and he is the person I admire most.”

Lee Doo Hee responded, “My girlfriend is Rainbow member and entertainer Kim Jisook and is the person I cherish the most in this world.” Regarding their appearance on the show, Jisook shared, “I wasn’t going to do it. We’re doing well and having fun so I was scared that we might run into some obstacles. I asked him what he thought and he responded really casually, saying he liked it. I’m doing it because of Lee Doo Hee.” 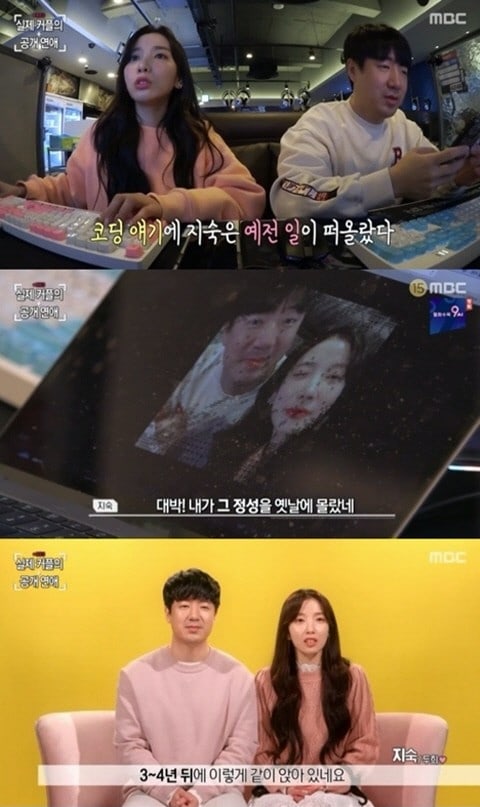 Lee Doo Hee revealed that he fell for Jisook after seeing her picture on the internet. He also shared that he tried a multitude of methods in order to date her, which took close to four years. Lee Doo Hee also revealed an app that he created in order to make Jisook fall for him, that transformed her into a star.

For their date, the two met at an internet cafe. However, Lee Doo Hee took everyone by surprise, even Jisook, when he pulled out his own laptop. Jisook watched in awe as her boyfriend focused on his game and proudly cheered him on after discovering his name on top of search engine charts because of an app he had made.

Jisook also took on Zico’s “Any Song” challenge, even putting Lee Doo Hee up to the test despite his plea that he had no idea what it was.

Following the broadcast, Jisook shared with Xportsnews, “I really like that the more we film, the more memories I feel like we are making. [While filming] I often thought that I was having really precious and special experiences. I am so thankful for Lee Doo Hee for being by my side and helping me out. Even I was unknowingly fulfilled watching us, thinking, ‘This is what it looks like when we are together.’ It was also really fun to see through the broadcast little moments that I would’ve missed from my perspective. Lee Doo Hee is so cute.”

After the episode, the couple even hit No. 1 on portal site search engines. Jisook continued, “I received a lot of supportive messages from people I know saying that we looked good together. Thankfully, there were many compliments for Lee Doo Hee. Thinking about it, I think I got more messages than when our dating news initially came out.”

She added, “Since we have a lot of similar interests and hobbies, I think we will be able to show a lot of us enjoying those things together. As we will continue in the future with positive feelings, please look upon us warmly and enjoy watching.”

Lee Doo Hee
Rainbow
Jisook
Don't Be Jealous
How does this article make you feel?