Yoo Jae Suk was brought to tears by the words of a nurse who stepped up to help at the frontlines of the novel coronavirus (COVID-19) crisis.

The March 11 episode of the tvN show “You Quiz on the Block” was the premiere of the show’s third season. The show’s concept usually features hosts Yoo Jae Suk and Jo Se Ho hitting the streets to speak to ordinary people about their everyday lives and give them surprise quizzes. Due to the coronavirus outbreak, the third season is instead being filmed indoors.

During the episode, Yoo Jae Suk and Jo Se Ho spoke via video call with a nurse from Seoul named Jung Dae Rye, who has been working nonstop in Daegu, the South Korean city with the highest number of COVID-19 cases. She said, “I’ve always felt a sense of duty that no matter where or when, I should be the first to step up. When they asked if I’d come here, I wasn’t thinking about myself at all when I said I’d go.” 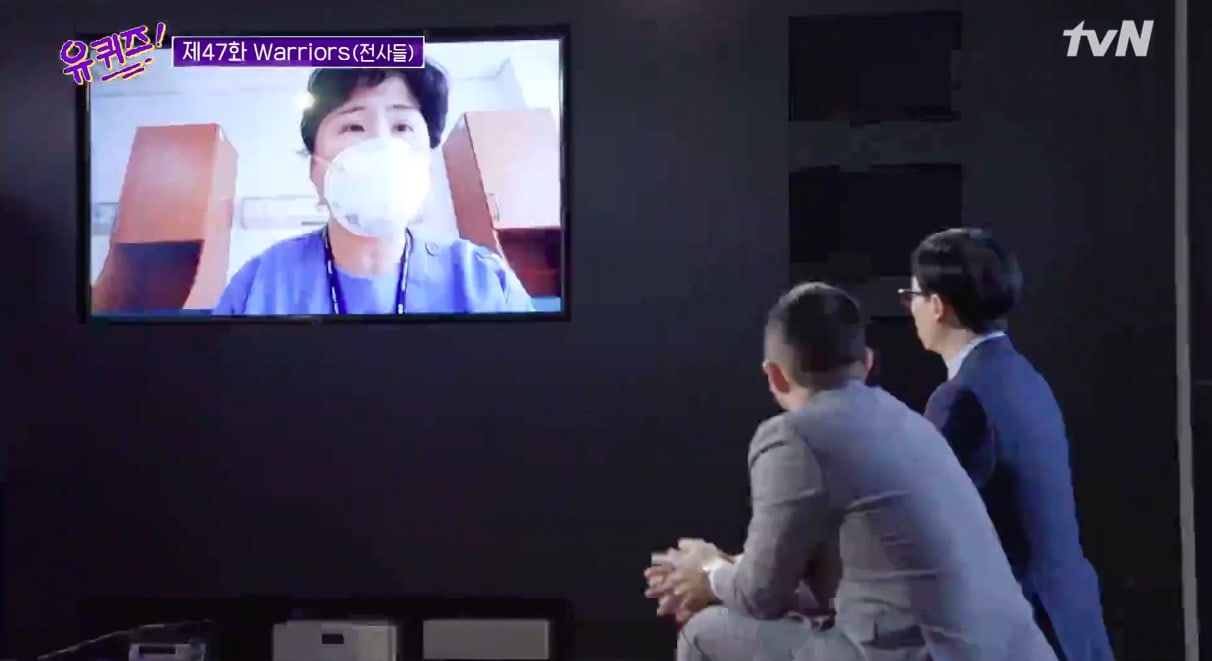 Jo Se Ho told her she is amazing and asked what her family’s reaction was to her decision. She replied that her family had asked her why she was going into a situation that other people were trying to avoid. She explained, “I’ve always thought that in a national crisis, I should take the lead.”

Jung Dae Rye talked about the current dire situation, explaining, “We have to work on shifts but the doctors can barely go home and are working 15 to 17 hour shifts.” She said that on top of all their hospital beds being full, they’re lacking in nurses and supplies like masks, gloves, and more. Yoo Jae Suk said his heart ached to hear that they were having to carefully conserve the supplies that they have.

When he said that he thought she must be very stressed, Jung Dae Rye replied, “I’m worried about my family sometimes, but I’m not stressed out otherwise.”

She went on to say, “I hope that the patients will quickly get healthy and we’ll beat COVID-19. People from all over the country are lending a helping hand and sending care packages, and I hope that the whole nation can get through this difficult period together.”

Jo Se Ho asked her if there’s anything she wants to say to her family, and she said, “I just want to tell them I’m doing okay. There’s nothing else to say. Don’t worry about me too much.”

Yoo Jae Suk asked if there was a reason she wasn’t giving them a long message, and she replied with a smile, “I’m doing okay here. I don’t have anything to complain about. I’m doing okay.”

Yoo Jae Suk then began to cry and said, “This is strange. You’re talking in a cheerful way but…” and he wiped his tears. 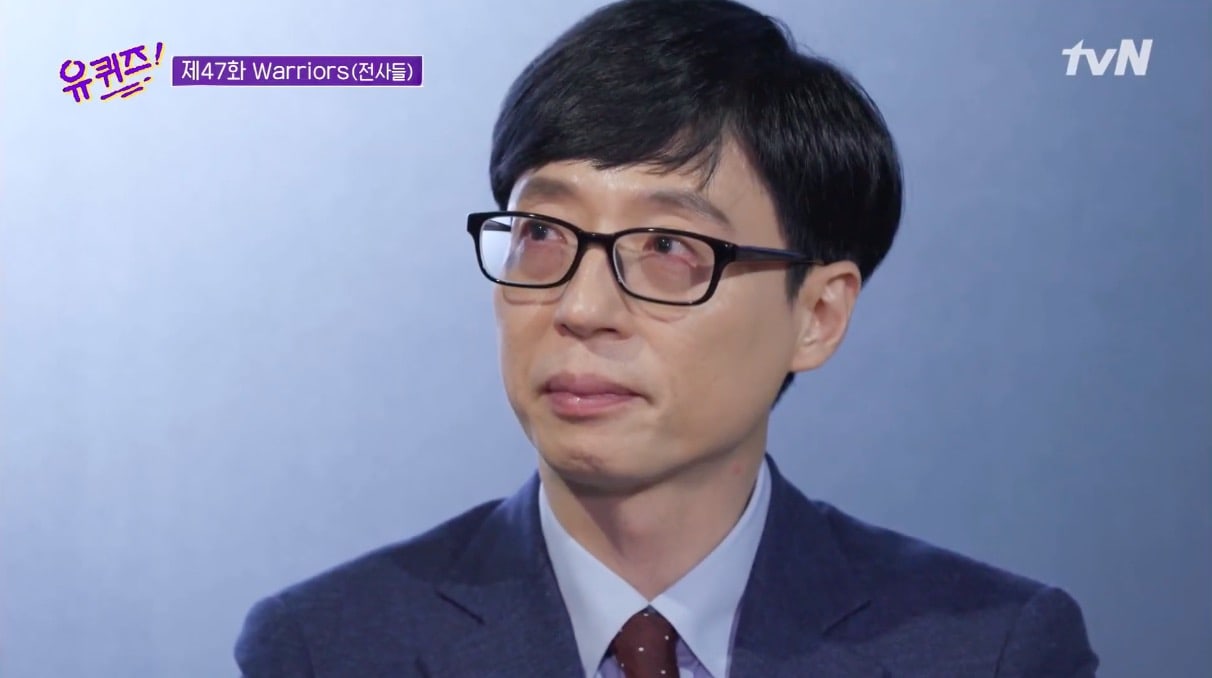 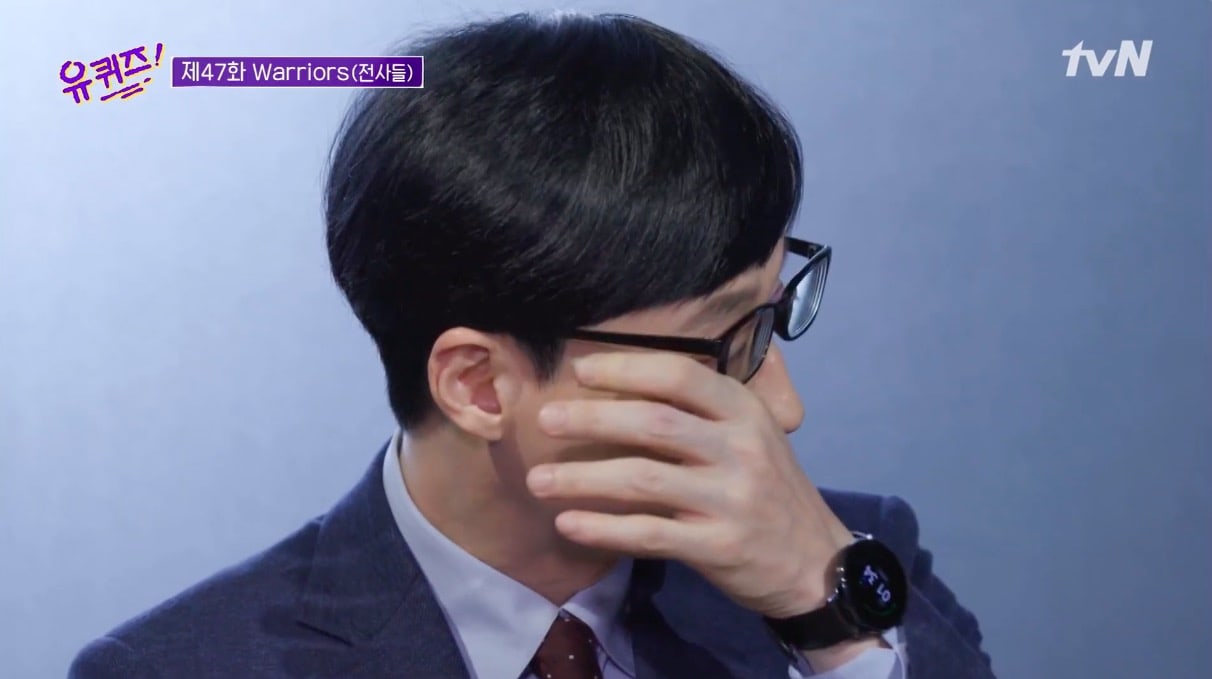 Jung Dae Rye went on to say, “To be honest, I miss my family and I’m worried about the hospital too, but I’m okay because I think that we’ll be okay and get through this. I’m doing okay. Everyone is doing okay.” She also became emotional but comforted Yoo Jae Suk by saying, “Why are you crying? I’m okay.”

Yoo Jae Suk explained that he wasn’t sure why he was crying. He said, “You keep saying you’re okay, but my heart aches so I’m crying. I didn’t know that I’d cry, but the tears aren’t stopping. It’s not as though it’s an extremely sad story.” Jo Se Ho expressed their gratitude and apology and Yoo Jae Suk also said he was sorry for reacting in such a way while Jung Dae Rye was working, and she assured him it was fine.

Yoo Jae Suk then asked her what she wants to do once the crisis is over. “I want to see my family,” she said with a tearful laugh. She went on to say that while she misses them, she knows that if a national crisis continues, it could spread overseas too. “We nurses are on the front lines meeting patients face-to-face and up close, and we’re doing our best.” 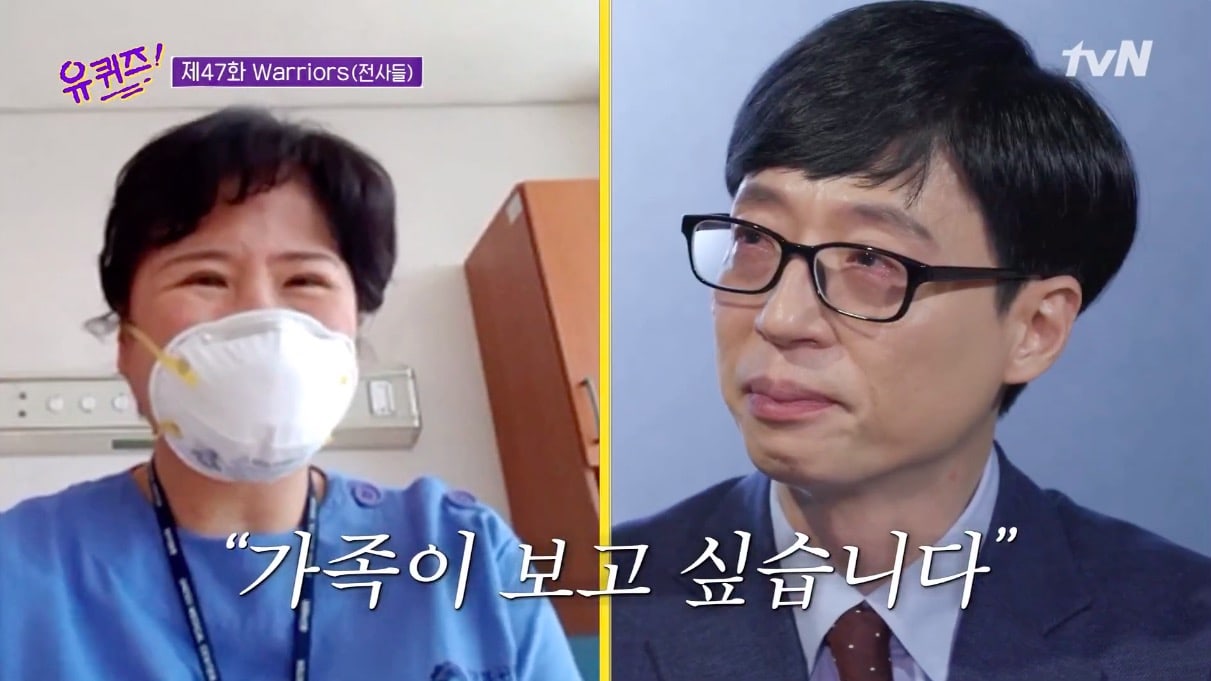 Yoo Jae Suk said, “I want to convey my indescribable gratitude and respect for those who step up and work hard to treat patients whenever something happens.”

The clip of the scene has gone viral, reaching over 1.5 million views. The producing director of the show talked about Yoo Jae Suk’s reaction in an interview with MBN. He said, “It was something that we didn’t expect at all either. When Yoo Jae Suk cried, the producing team in the studio also cried. I think we all felt the same way.”

Yoo Jae Suk
Jo Se Ho
You Quiz on the Block
How does this article make you feel?