Girl’s Day’s Yura is going to be making a special appearance in MBC’s upcoming drama “Find Me in Your Memory”!

The new romance drama is about the love story between two people with similar emotional scars whose memories work in opposite ways. Kim Dong Wook will star as Lee Jung Hoon, a news anchor with hyperthymesia (a condition that gives people the ability to remember an abnormally vast amount of their life experiences in vivid detail). Meanwhile, Moon Ga Young will play rising star Yeo Ha Jin, a famous actress who has forgotten some of the most important moments in her life as a psychological defense mechanism.

In the drama, Girl’s Day Yura will transform into Go Yu Ra, a top actress who is expected to induce rage with her jealous, snobby personality. The latest stills show Go Yu Ra and Yeo Ha Jin staring each other down on a film set. Go Yu Ra gazes at Yeo Ha Jin with a confident smirk, while Yeo Ha Jin looks perplexed by the situation.

In particular, the two characters are wearing the same outfits. Go Yu Ra, who likes to trigger Yeo Ha Jin, purposely changes her outfit and appears on the drama set. Now, one of them must change their clothes, and the tense situation raises viewers’ expectations for the upcoming premiere. 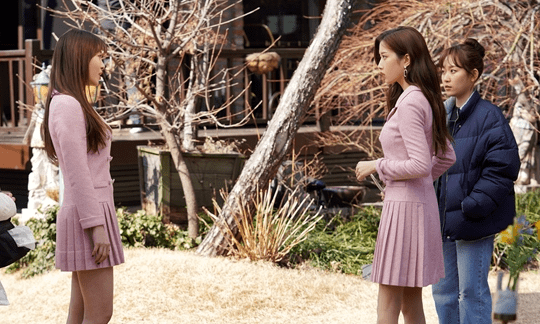 The production crew commented, “Yura created a strong impact in the drama by playing a mean and sly character. She gave off a short but strong presence with great acting skills that helped her portray her character perfectly. We’d like to thank Girl’s Day’s Yura for performing passionately despite her busy schedule. Please check out her acting in the premiere.”

Moon Ga Young
Girl's Day
Yura
How does this article make you feel?