Jung Woo Sung Talks About His Perspective On Love, His Public Dating Experience, And More

On March 18, Jung Woo Sung appeared on the KBS show “Dolseung.” During this episode, the philosopher Kim Yong Ok (better known by his pen name of Doh-ol) gave a talk about love. 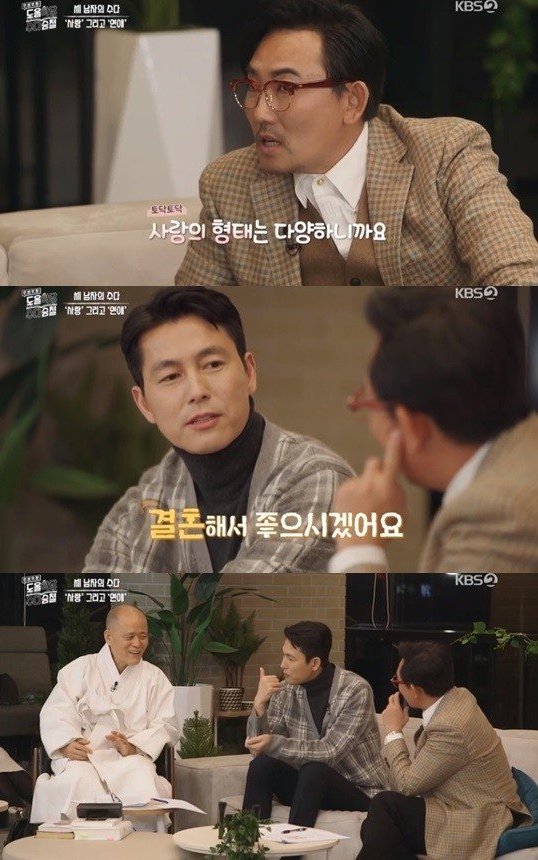 At one point, Lee Seung Chul asked Jung Woo Sung about his past public dating experience. In 2011, the actor publicly acknowledged his relationship with actress Lee Ji Ah, but the couple parted ways within the year.

Lee Seung Chul said, “You publicly dated before, right? I thought you were really cool then.” But Jung Woo Sung replied bluntly, “[My partner] hated it. Imagine meeting someone who is marked out as having no anonymity. No matter where you go, you catch people’s attention. This job is one of the most uncomfortable that a potential boyfriend could have. You can’t do anything spontaneously.”

He continued, “Being able to go around freely together is an important part of emotional attachment. I couldn’t do that, so I was useless, and not a very fun boyfriend.”

The actor also said that he’d been dumped by his partners before. “Of course I’ve been dumped,” he said. “It’s a pitiful story. I was in materially difficult circumstances, so I basically freeloaded off of them every day. I was working part-time as a model and earning an allowance, but I didn’t usually have a lot to spare.”

Jung Woo Sung also expressed his regret that it was too easy to meet up and contact people nowadays and talked about the past, when there were no smartphones and waiting was a big part of romance. “I think that love is when you and your partner acknowledge each other and respect each other’s space,” he said.

When Doh-ol asked him if he thought people could only love one person in their lifetime, Jung Woo Sung replied, “Parting ways with someone is also part of love. We have to acknowledge breakups as a part of love in order to be mature and not become obsessed.”

When asked if he is currently dating, Jung Woo Sung said, “Love is something you always have to do. Please love.”

Jung Woo Sung
Lee Seung Chul
How does this article make you feel?