After being discharged from the military on March 19, Lee Jung Shin and Kang Min Hyuk held a live broadcast on V Live!

The members said they had wanted to meet fans right away and expressed how happy they were to be able to do so through V Live.

Lee Jung Shin said, “To be honest, I’m worried this might be a dream. It feels like when I wake up, my fellow soldiers will be next to me.” He added, “Thank you so much for waiting. In the future I’m going to work with the mindset that I’m making it up to the fans who waited.”

Jung Yong Hwa also appeared as a surprise guest to congratulate the guys. He had come to the agency to work on music and stopped by with a bouquet and cake for the newly discharged members. 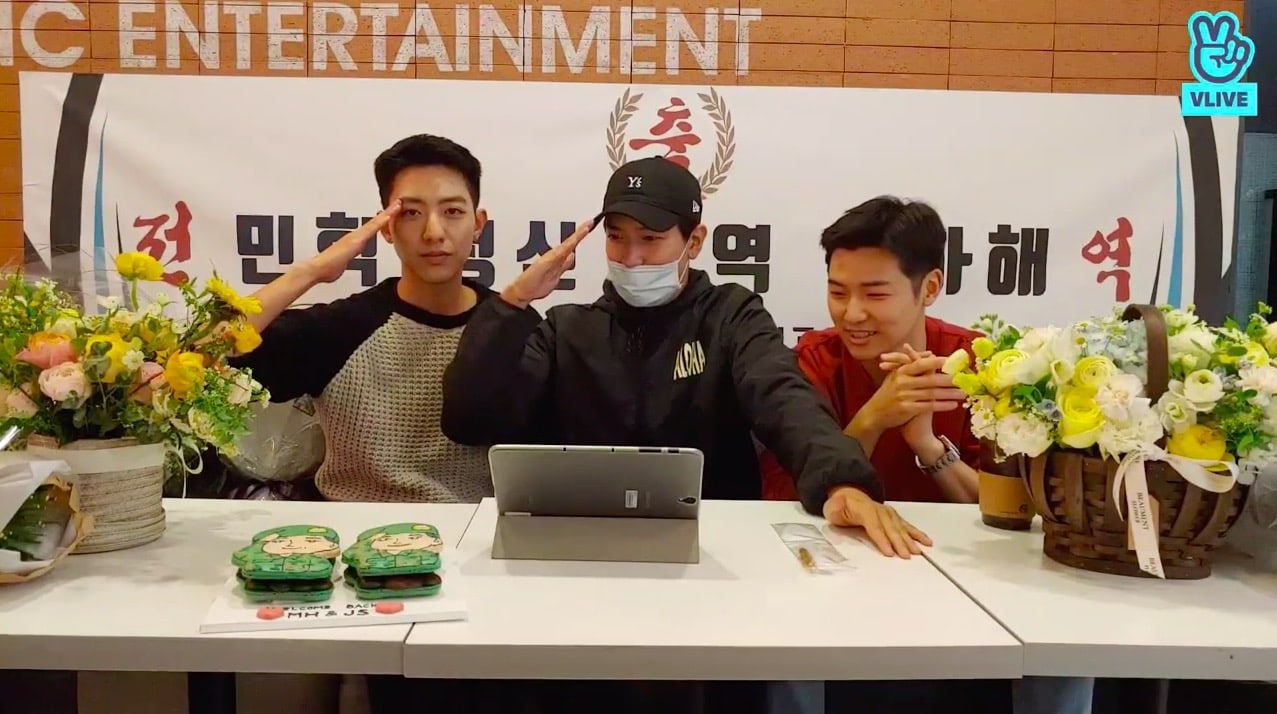 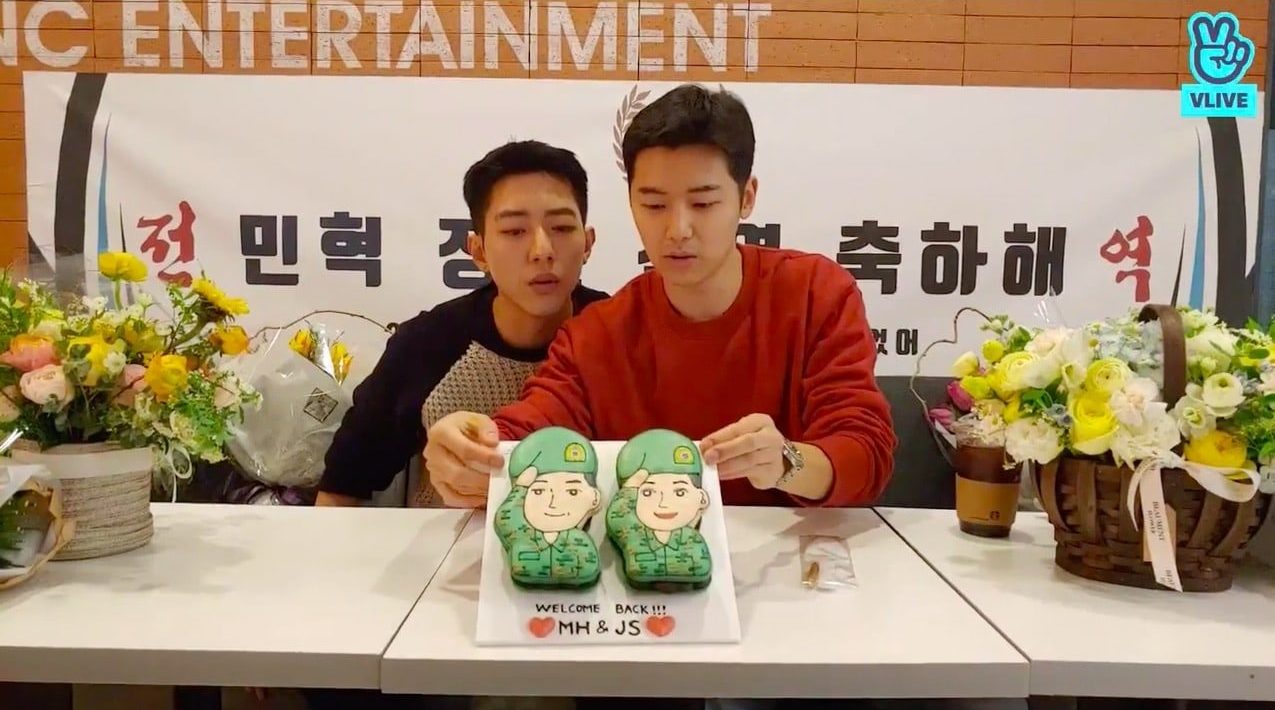 The pair looked back on when they first enlisted at the training center. Lee Jung Shin said, “We enlisted on the same day. It was July 2018 and it was so hot out.”

Kang Min Hyuk said, “I didn’t lose a single pound at the training center. I ate really well with the mindset of gaining strength.”

Kang Min Hyuk added that they’d been given water even while they were training because of the heat. “It was a record-breaking heat wave,” he said. “It was so hot that it was hard to sleep.” Lee Jung Shin described that even if he showered, he’d still be sweating after.

When asked if there had been anything difficult about military life, Lee Jung Shin replied, “I didn’t have any difficulties during military life. That time was so precious to me. It was about 600 days, and rather than it being difficult, it was a time for me to look upon myself.”

Kang Min Hyuk said, “I think I had less — I’m not sure what to call it, maybe ‘needless thoughts.’ It was also fun to spend time with the fellow soldiers that I’d just met. We treated each other like we were same-age friends. I was pretty old when I enlisted. It might be uncomfortable for someone who’s older, but we all treated each other like we were the same age. I felt like I’d gone back to being 20 or 21 years old.” 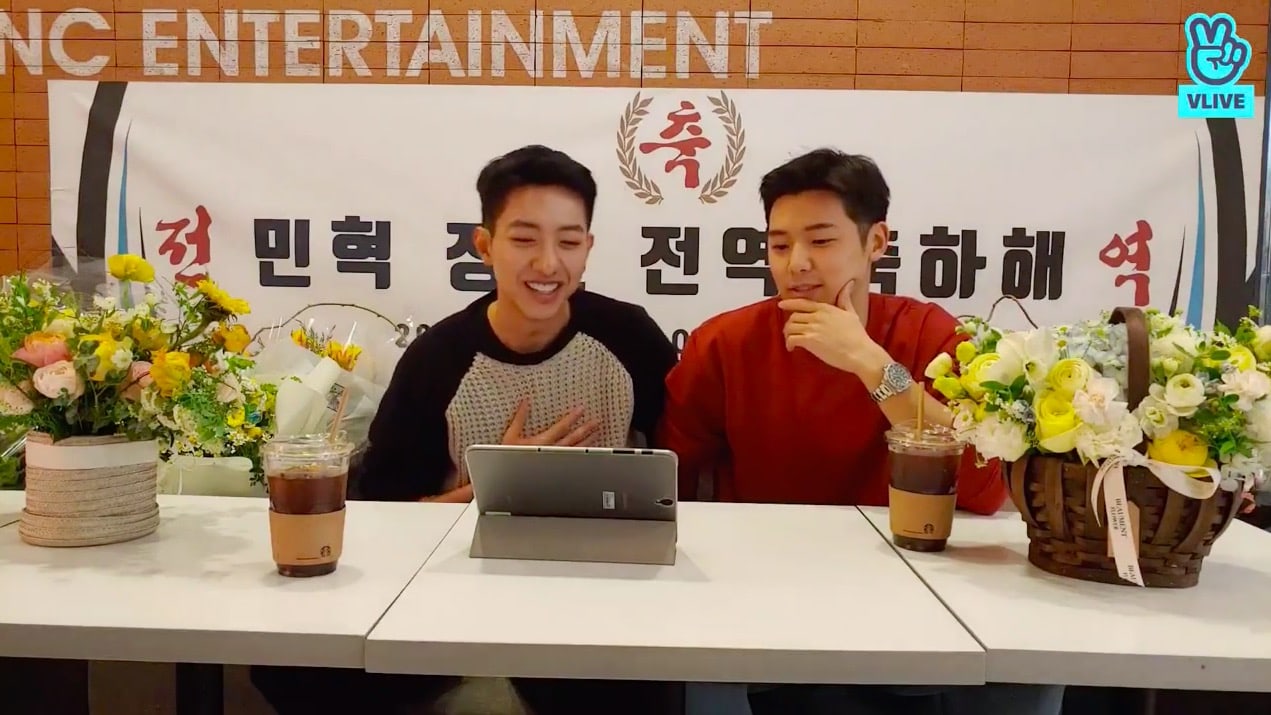 Kang Min Hyuk said that he’d received a commendation as a division commander. He added, “Out of the 200 to 300 of us, they picked three people who had worked particularly hard during training, and I came in first overall at the completion ceremony.”

The guys also talked about how they’d gone on their ETS leave (taken at the end of military service) together. Kang Min Hyuk said, “I went to Jung Shin’s division in my uniform. I was prepared to take a photo of him when he came out, but he suddenly came out. We quickly went and also took photos.”

Kang Min Hyuk and Lee Jung Shin shared how Jung Yong Hwa had invited them to his home during their final leave. “When we went to his home, he prepared a lot of food for us,” said Kang Min Hyuk. “We ate barbecue pork ribs and bread, and I was so touched.”

Lee Jung Shin shared that it made him think that Jung Yong Hwa is a good cook. Kang Min Hyuk said, “I was really surprised by how thoughtful he was toward us.” He added, “I think since he was discharged before us, he understands how we feel.”

CNBLUE’s 10th anniversary had been during their military service. When Kang Min Hyuk mentioned this, Lee Jung Shin said, “Once again, happy 10th anniversary, and it’s all thanks to our fans. We’ll make it up to fans with great music that meets your expectations.”