MONSTA X’s fans Monbebe have sent their 2017 track “From Zero” to No. 1 on Billboard’s World Digital Song Sales chart!

On the chart for the week ending on March 28, the No. 1 spot is grabbed by MONSTA X’s “From Zero” off their November 2017 mini album “The Code.” 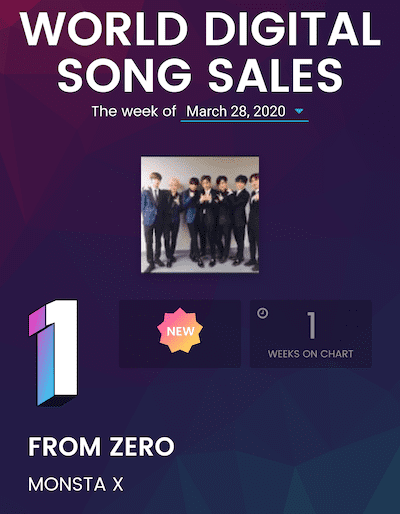 Wonho composed, wrote lyrics for, and arranged the track, and fans have shown their support for Wonho by making “From Zero” soar to the top of the chart. Wonho departed from the group last October following allegations made against him, and it was announced that there was an investigation underway regarding charges of his alleged marijuana use in 2013.

On March 10, Starship Entertainment announced that the investigation concluded with Wonho cleared of all charges related to the case, and fans have boosted the song on the charts as a way to celebrate.

Congratulations to MONSTA X and Monbebe!