Watch: MONSTA X’s Joohoney Visits Minhyuk At “Inkigayo” + Talks About What He’s Been Up To During Hiatus

On March 25, MONSTA X shared a behind-the-scenes video of Joohoney visiting Minhyuk, who is one of the hosts of SBS’s “Inkigayo.” Joohoney has been taking a temporary hiatus from activities to focus on his mental health, but he is currently preparing to make a comeback with his members within the first half of this year.

In the clip, Joohoney first stopped at a café to buy Minhyuk’s favorite drink, brown sugar bubble tea, along with coffee and snacks. 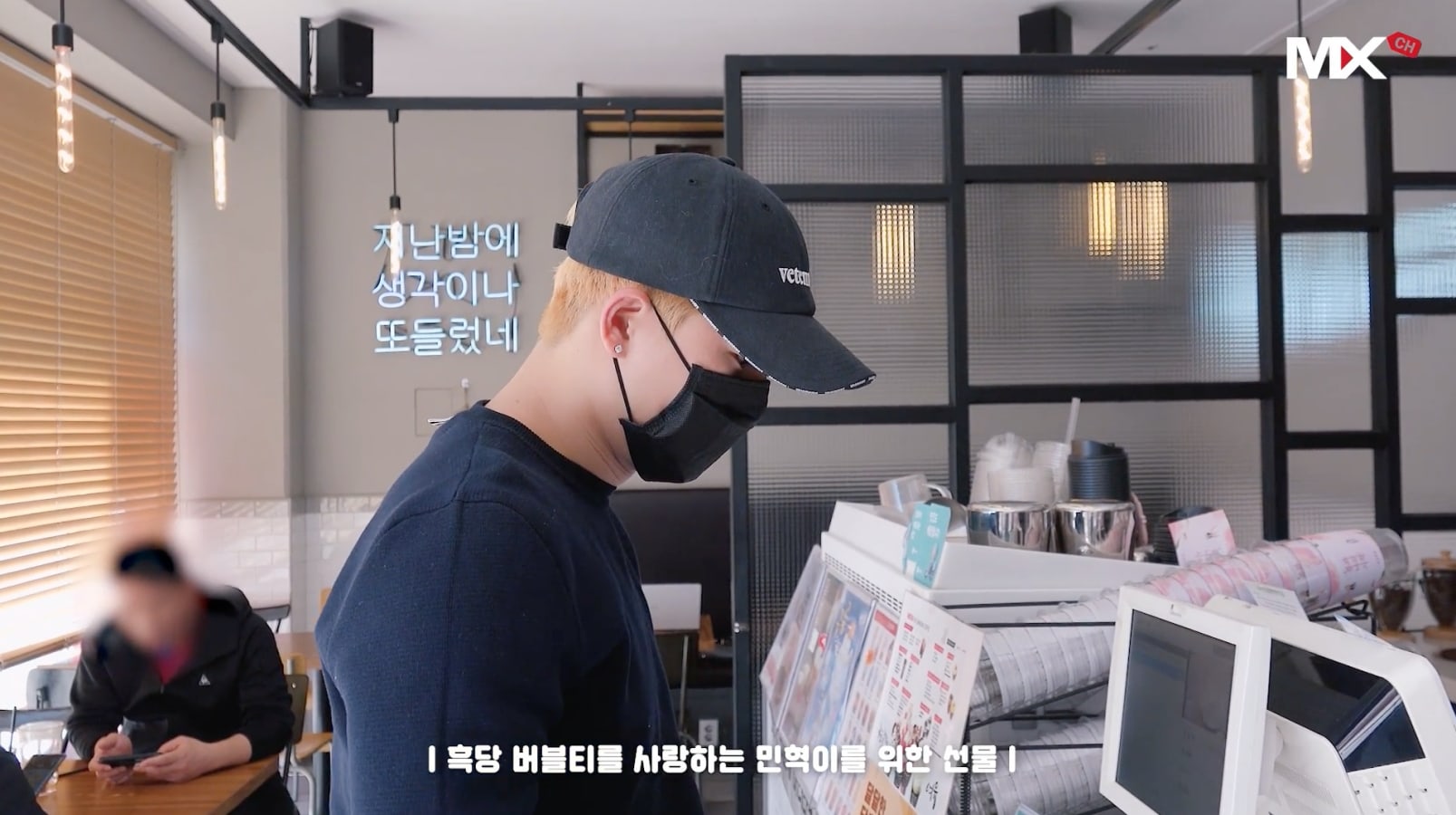 While waiting for the drinks, Joohoney shared his thoughts on various things including the coronavirus outbreak and his outfit.

When asked where he wants to go while wearing his outfit, he replied, “Somewhere sentimental with music. I want to go outside, but everyone has to be careful these days. For our Monbebes [MONSTA X’s fandom] living abroad, there’s nothing I can do for you, but I think that I can give you strength by saying something to you. Please hang in there and make sure you use hand sanitizer.” 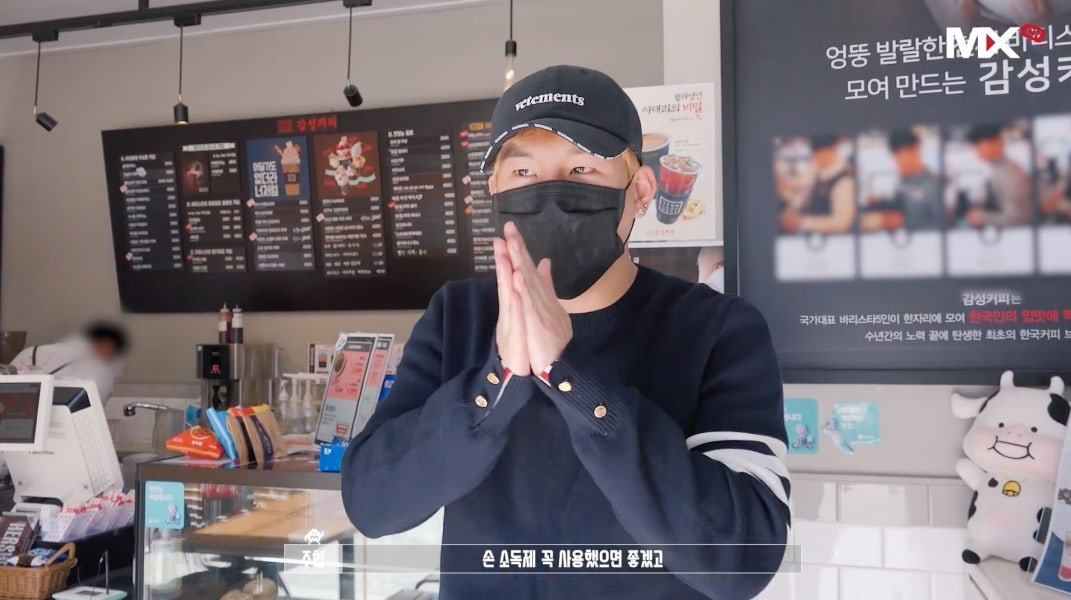 After reading neon signs around the store, Joohoney said, “I feel good when I read pretty phrases like this. I’m really curious about what Monbebes are doing right now and miss you too. So I look those things up and go to the fan café to read your reactions. I’m reading a lot about Monbebes’ vibes and reactions. I can use this to write songs.”

He continued, “I completely stopped writing songs while resting. I stopped everything and let everything go. I ate what I wanted to eat, slept if I fell asleep, and spent a lot of time at home. One thing I realized was why people are homebodies. It was so nice being home.” 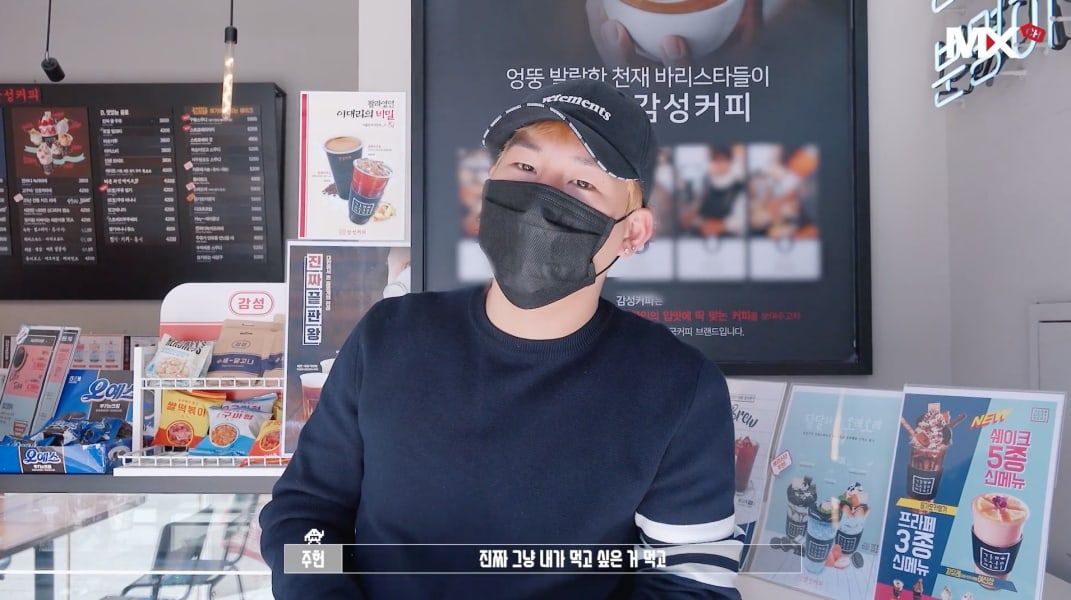 “Meeting up with people and talking with them is nice, but I watched Netflix, films, and dramas comfortably at home,” said Joohoney. “Because we live in a good society, I ordered what I wanted to eat. I did a lot of different things. I ate delicious broiled eel. I went shopping, which is something I enjoy doing. If I was walking around and saw food that looked delicious, I just walked inside and ate alone. I’m good at eating alone.”

He added, “I also exercised frequently. Exercise gave me a lot of strength and helped me mentally as well.” 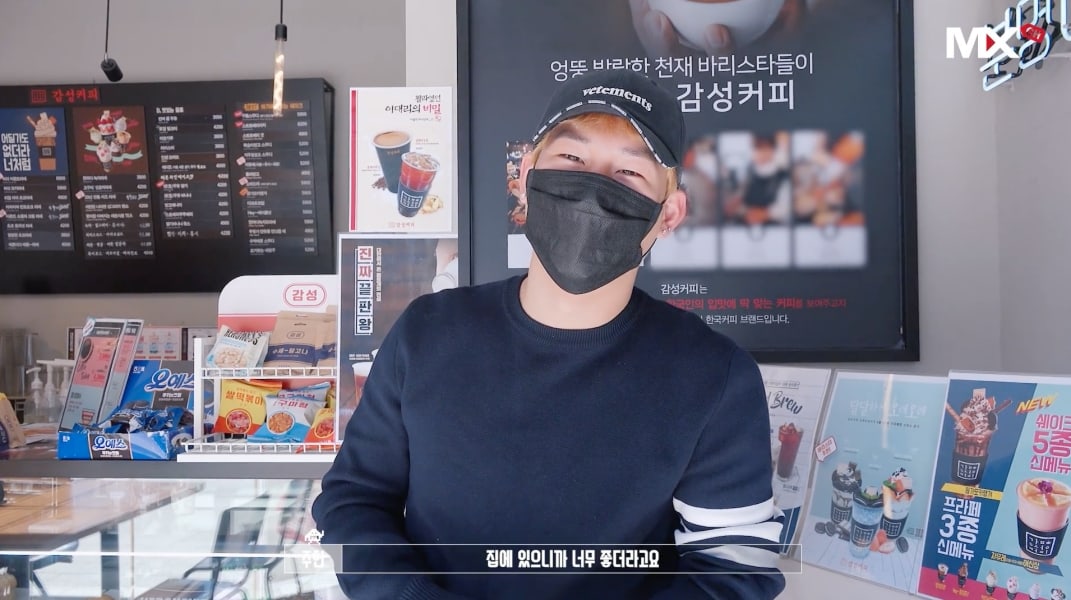 Joohoney then took the drinks and headed to the SBS broadcasting studio to Minhyuk’s dressing room. “Joohoney is the first member to come cheer me on,” said Minhyuk with a smile.

He marveled at the drinks and snacks Joohoney brought him and the two members sat down for a chat. Minhyuk said, “I thought you were sitting on that side so I kept looking over there, but you weren’t there. Instead, you were sitting right in front.”

Joohoney commented, “I can watch many people’s performances for the first time in a while. I’ll learn a lot while watching. But it’s my first time in a dressing room in a while, so it feels really awkward.” Minhyuk encouraged him, saying, “It can be like a rehearsal. Thank you so much Joohoney for coming.” 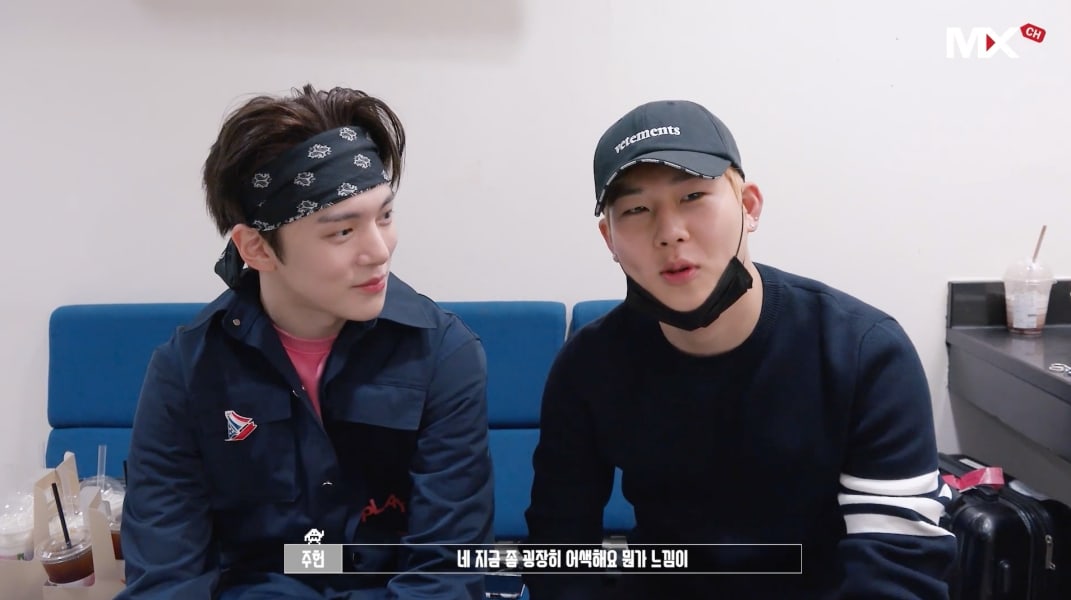 Minhyuk then asked if he bought brown sugar bubble tea and smiled when he saw his favorite drink. The two had fun chatting and sharing a bag of snacks.

Speaking about what the group has been up to, Joohoney told fans, “We’re preparing for our concert. It’s said that MONSTA X’s concerts are fun, right? So we’re preparing a lot of fun performances. You’re going to be so surprised. So surprised. You’re going to find yourself standing up while watching.” Minhyuk commented, “You gave them too many [spoilers]. That was just enough.”

Joohoney enjoyed a meal at the cafeteria and ended his visit by taking selfies with Minyhuk, which he later uploaded on the group’s Twitter account.

MONSTA X
Minhyuk (MONSTA X)
Joohoney
How does this article make you feel?