Super Junior’s Kim Heechul and SEVENTEEN’s Seungkwan went head-to-head in a heated battle to be crowned the king of the one-second guessing game!

On the March 28 episode of JTBC’s “Ask Us Anything,” Seungkwan revealed that he had always wanted to challenge Heechul to a one-on-one match of the popular game, in which players must guess a song and its artist after hearing only the first second of its intro.

Because Heechul has repeatedly proven his prowess at the game on the show, the “Ask Us Anything” cast have dubbed him its champion—and Seungkwan was ready to claim that title for himself.

While most of the cast members expressed doubt over whether Seungkwan would be able to defeat their undisputed champion, Lee Soo Geun—who has appeared with Seungkwan in more than one variety show in the past—warned them that he was a strong contender.

Speaking from experience, he told Heechul, “Seungkwan is really good at this! He’s a total ace. As far as I know, Boo Seungkwan may be a little weak when it comes to knowledge of really old songs, but when it comes to more recent songs, he’s definitely [Heechul’s] rival.” 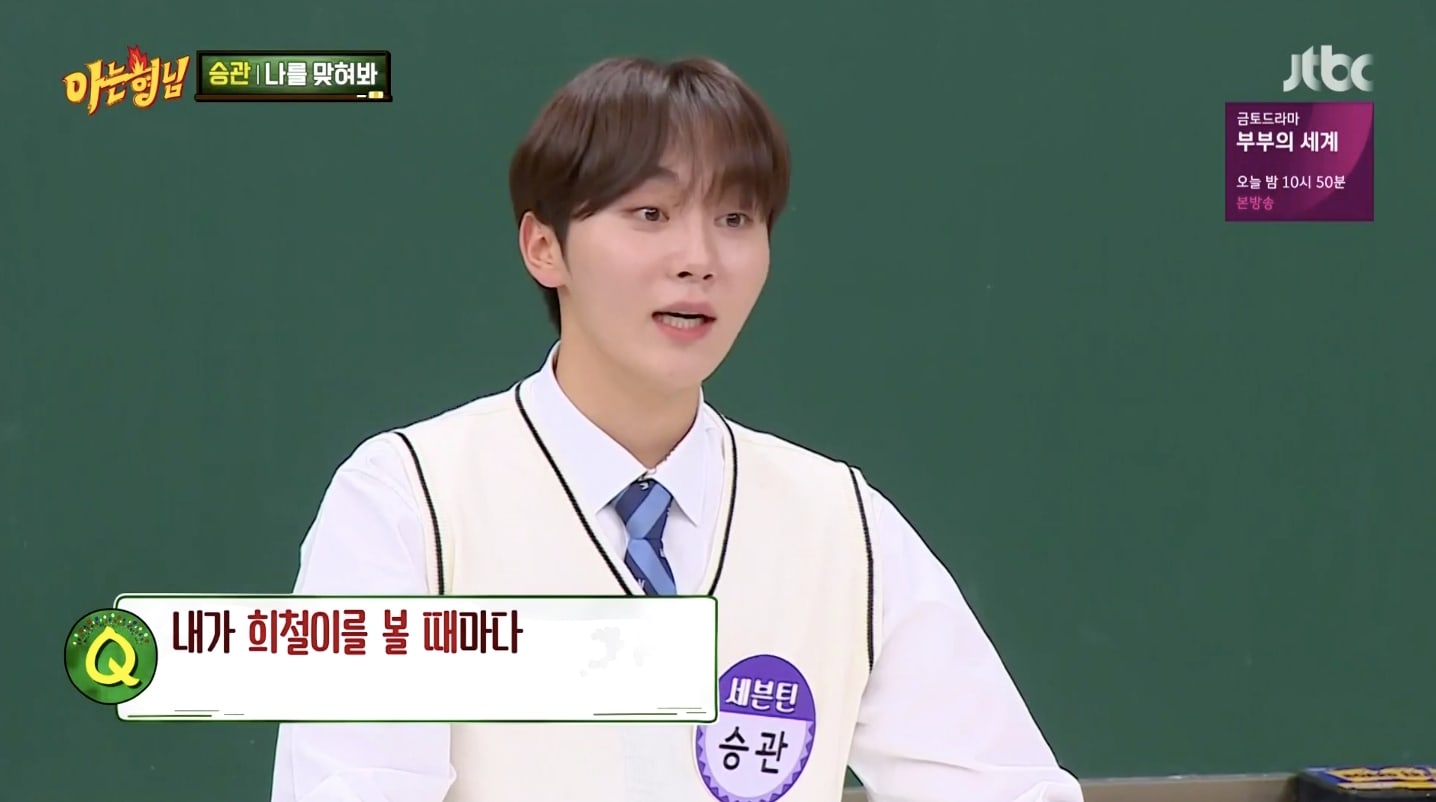 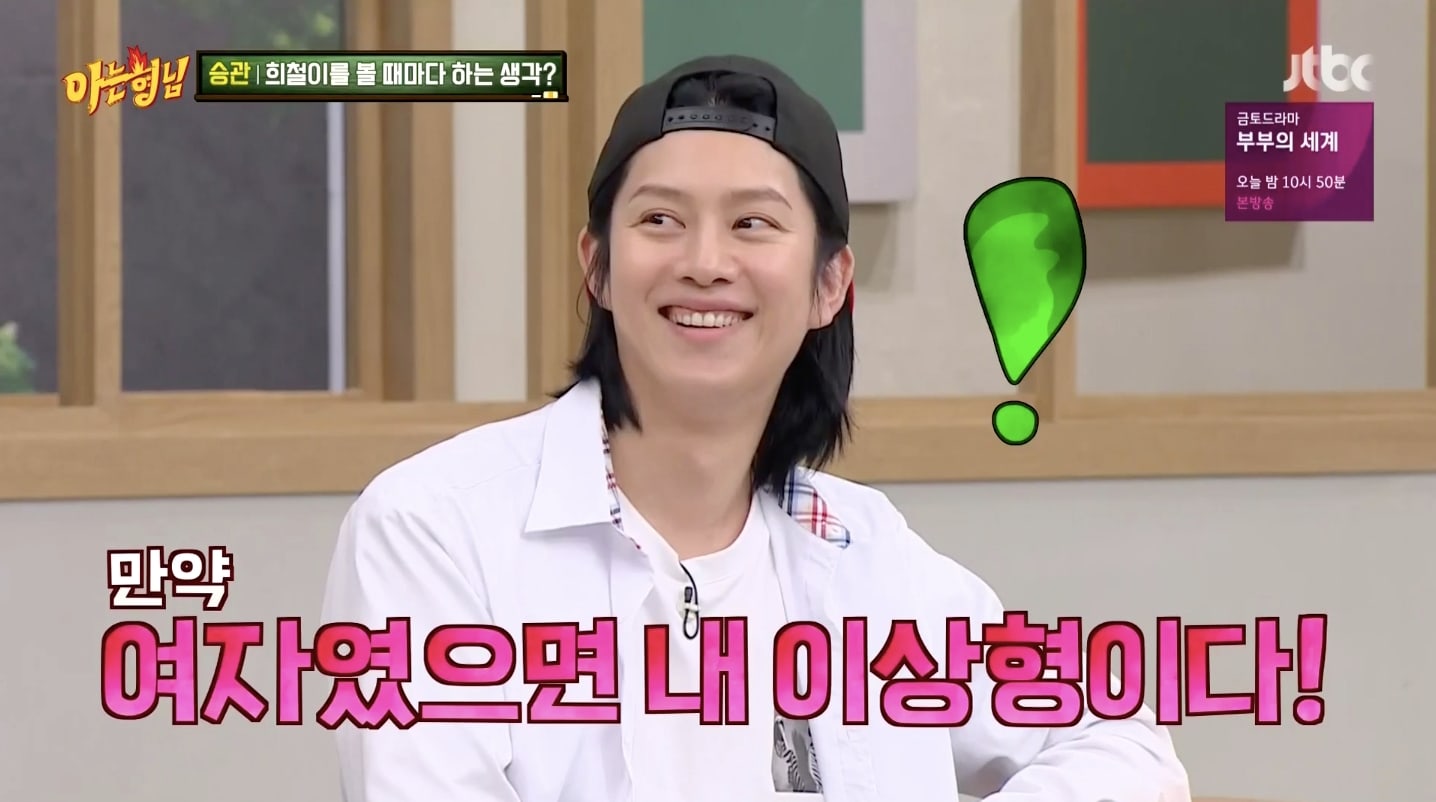 The two singers then faced off in a one-on-one guessing game battle, and Seungkwan soon proved that his confidence was well-founded. Although Heechul successfully guessed BLACKPINK’s “DDU-DU DDU-DU,” Apink’s “Mr. Chu,” and Davichi’s “Love and War,” Seungkwan was just as fast, and he quickly recognized Baek Ji Young‘s “My Ear’s Candy,” U-KISS’s “Man Man Ha Ni,” and Rainbow’s “A.”

With the score tied 3 to 3, Heechul applauded his opponent and commented, “Seungkwan, you’re really good at this. I have no choice but to pass my title on to you.”

In the end, it was Seungkwan who claimed the victory after correctly guessing the final song (Son Dam Bi‘s “Saturday Night”). As the other cast members marveled at the SEVENTEEN member’s skills, an impressed Heechul conceded his defeat by taking off his hat and placing it on Seungkwan’s head as though he were relinquishing his crown. 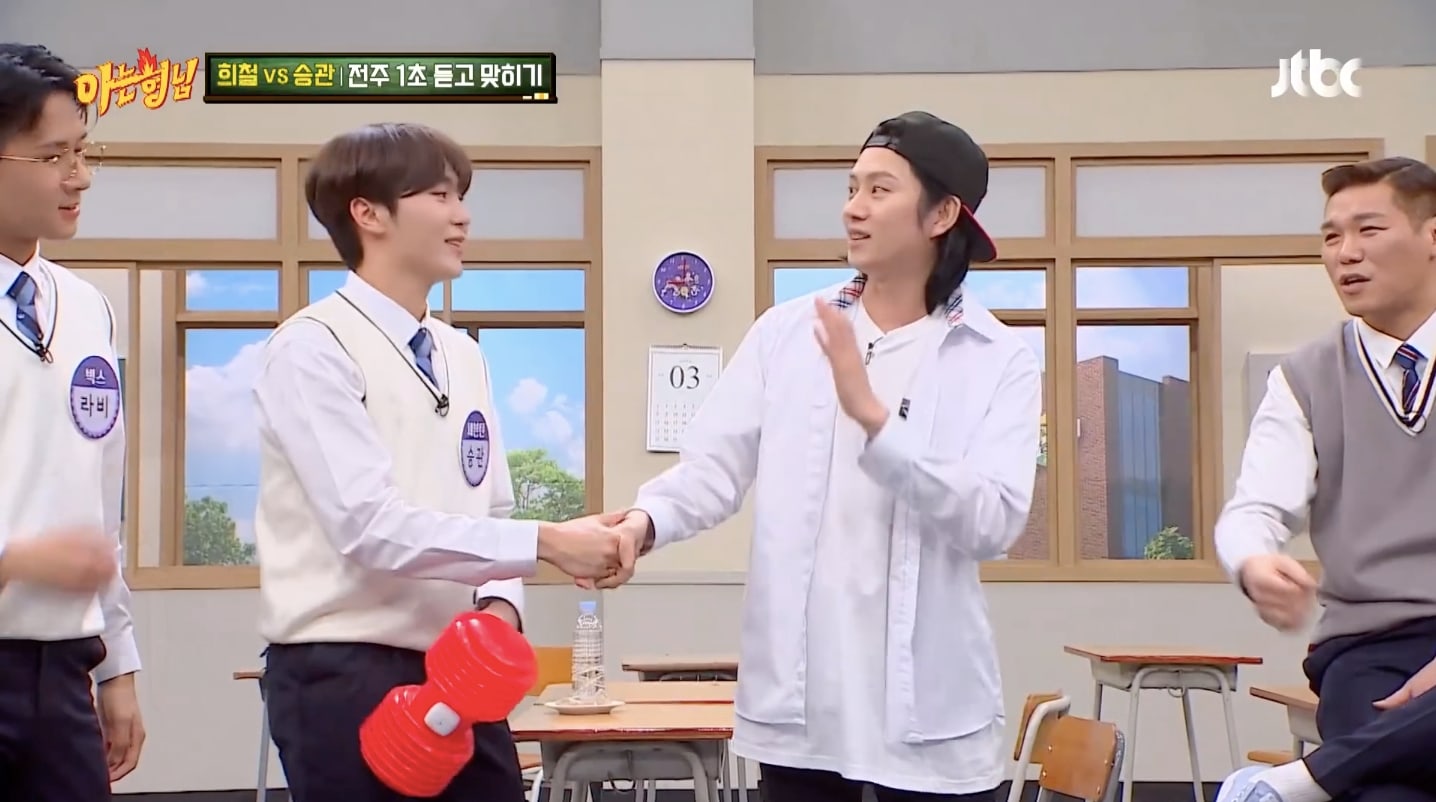 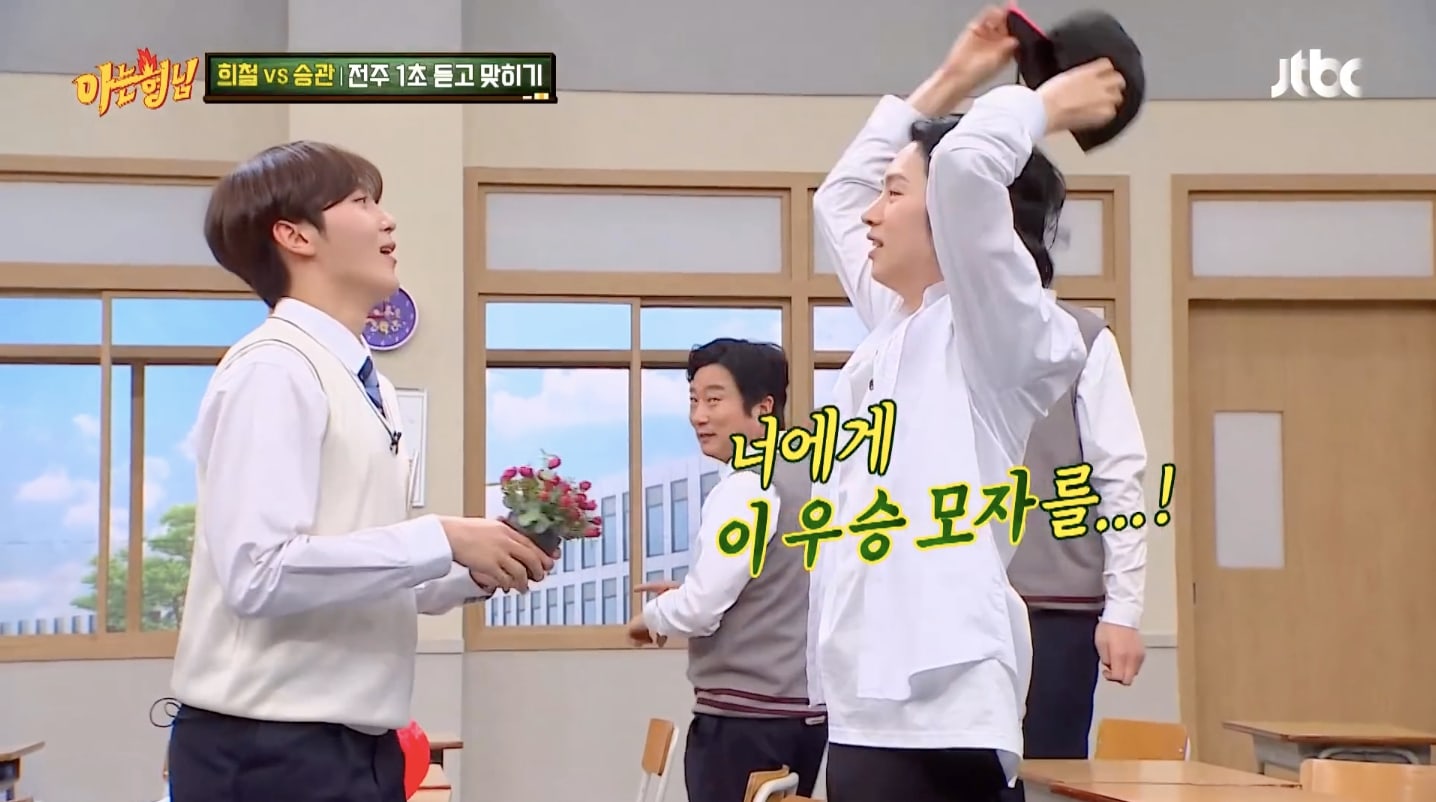 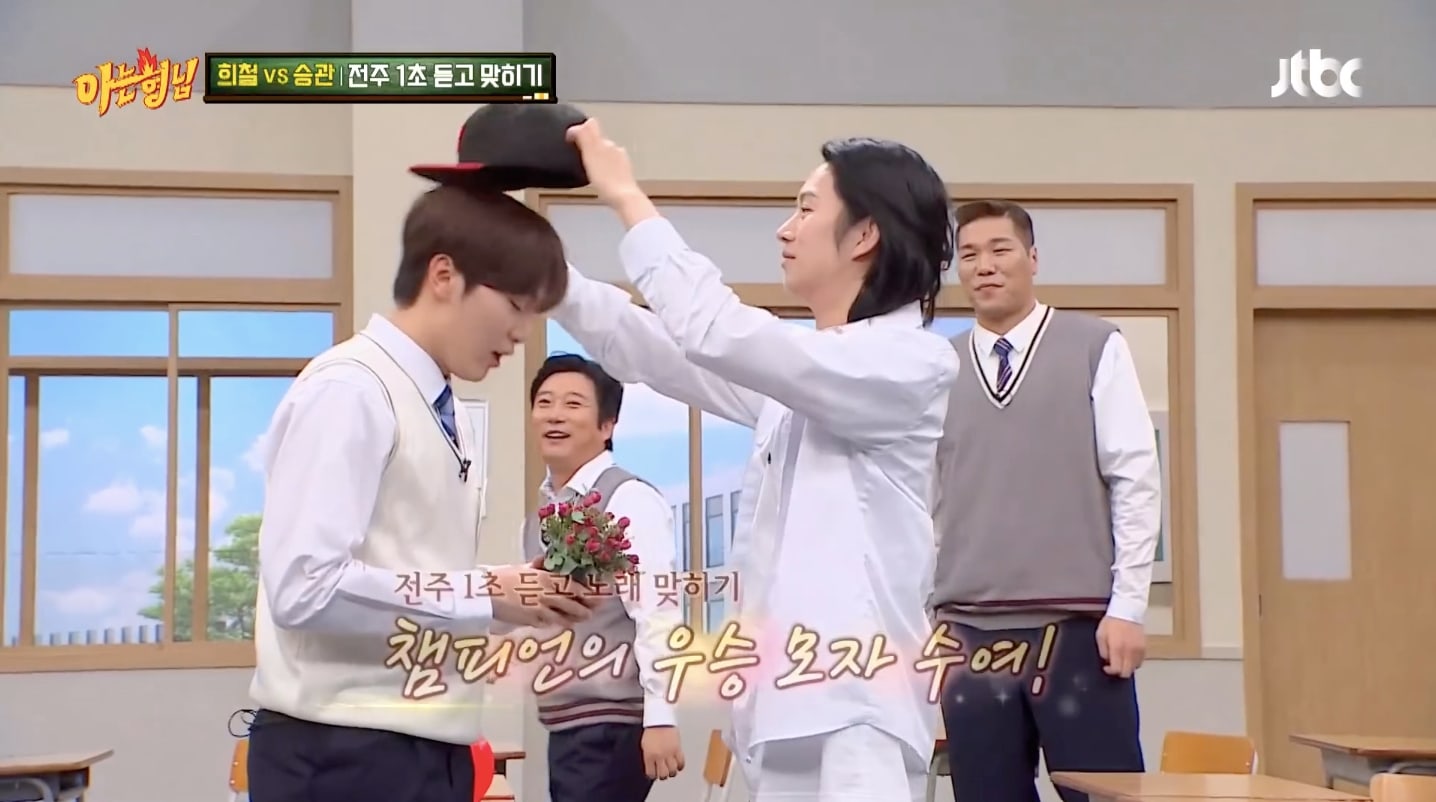 Watch the clip of Seungkwan winning the guessing game below!