“I’ll Go to You When the Weather Is Nice” is capturing the viewers’ attention with more than just its main love story!

Although the drama centers around the romance between Mok Hae Won (Park Min Young) and Im Eun Seop (Seo Kang Joon), there are three other relationships that are keeping the audience alert with their realistic love stories.

Here are the three other romantic relationships that are being portrayed by the supporting actors: 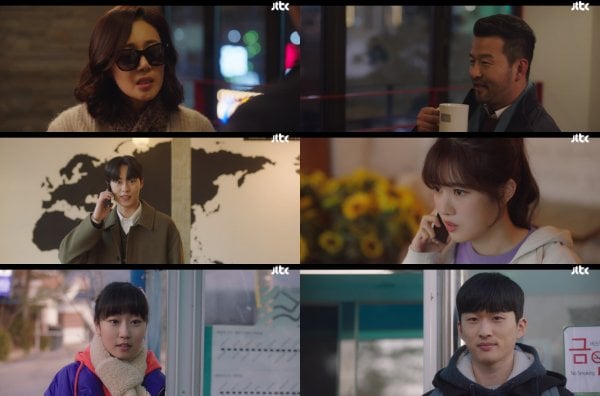 Shim Myung Yeo, a former best-selling author who lived a splendid life, took a unique approach to love. She always took the initiative in relationships and controlled the people in her lives. She broke up with many men in her lifetime over a variety of reasons. The one man who always managed to stay by her side though was “crybaby” Cha Yoon Taek. Then things took a downturn when she killed her brother-in-law Mok Joo Hong (Seo Tae Hwa) in an unexpected accident.

Cha Yoon Taek is now a popular editor, but he returned to Shim Myung Yeo’s side. Shim Myeong Yeo also couldn’t forget the 20 years she spent with him. However, she gave up all the happiness she was enjoying due to the guilt she felt towards her sister Shim Myung Joo (Jin Hee Kyung) who went to jail on behalf of her. A key point for the rest of the drama is whether Cha Yoon Taek’s pure love will be able to reopen Shim Myung Yeo’s heart.

Meanwhile, Lee Jang Woo’s unrequited love for Ji Eun Sil, his classmate and first love, is making viewers smile and laugh. Lee Jang Woo is in love with her smile and the way she isn’t embarrassed to eat well, but he attempts to act cool in front of her. Whenever she calls, he drops everything to go see her, and although he’s not the type to be discouraged about anything, he can’t help but grow flustered in front of her. His parents are nagging for him to get married as soon as possible. Will he be able to fulfill their wishes with Ji Eun Sil?

Im Eun Seop’s younger sister Im Hwi is stirring up the town of Buk Hyeon with her wacky charm, but she also has a wacky way of expressing her emotions. Im Hwi has a huge crush on an older boy named Kim Young Soo, and she went through strenuous efforts to make him notice her. She gathered all kinds of information about him and approached him with her quirky charms.

One day, Im Hwi heard the news that Kim Young Soo got a girlfriend. She claimed she didn’t like him anymore, but she praised him, saying, “You have broad shoulders, and the school uniform looks good on you. So what do you want me to do about it? My crush on you may be in the past tense, but what do you want me to do when you look so great right now?” Since then, Im Hwi’s love story has taken a new turn, and she even asked Kim Young Soo to join the book club. Expectations are high for their fresh and witty teenage romance.

Catch up on the latest episode with English subtitles here:

Moon Jung Hee
Kim Hwan Hee
Yang Hye Ji
Lee Jae Wook
I'll Go to You When the Weather Is Nice
How does this article make you feel?