There are only six more episodes left in “A Piece of Your Mind”!

Previously, the production team shared their decision to shorten the drama to 12 episodes to increase the story’s pacing. So here are three key points to keep an eye on in the second half of the drama:

Moon Ha Won’s life centered around his unrequited love Kim Ji Soo (Park Ju Hyun). However, Han Seo Woo told him it’s time to stop and move on. Since then, Moon Ha Won has struggled to put away his long-term feelings for Kim Ji Soo, but it seemed like he was actually going to change this time as he said, “Ji Soo, to stop [loving you] means to put an end to my long-term regrets.” This raises questions about how Moon Ha Won will mend the scars of his past and start a new life.

Attention is also being paid to Kim Min Jung who lives in the boarding house with Han Seo Woo. Kim Min Jung regarded Jeon Eun Joo (Lee Sang Hee) with strange eyes, leading viewers to guess that they have a relationship prior to the boarding house. At the same time, Kim Min Jung aroused curiosity with her mysterious behavior, such as asking for the last room and posting photos on social media every hour. 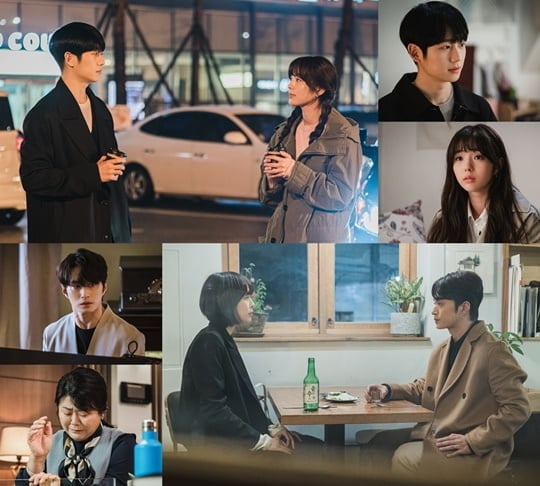 Moon Ha Won and Han Seo Woo are about to start their romance. Han Seo Woo confessed her unrequited love for him, and Moon Ha Won said, “I need you. Please stay with me.” Expectations are soaring over their sweet romance that is to come.

Things are also about to change between Moon Soon Ho and Kang In Wook. Moon Soon Ho saw how depressed Kang In Wook was, and with her caring heart, he gradually began to emerge from his slump. Attention is also drawn to what kind of relationship these two characters will form.

The production crew said, “From episode 7, which will air on April 13 (Monday), the process of the characters in the drama, such as Moon Ha Won, Han Seo Woo, Moon Soon Ho, and Kang In Wook, being comforted and healed by each other’s existence, along with the sweet romance, will spread warmth and excitement. Please look forward to the second half of ‘A Piece of Your Mind’ which will make viewers’ hearts pound even more.”