IU Shares Her Love For Apink’s Jung Eun Ji, Yoo In Na, And Kang Han Na, What She’s Been Up To, And More

On April 13, IU appeared as a guest on KBS Cool FM’s “Jung Eun Ji’s Music Plaza” to share what she’s been up to, her friendship with fellow female celebrities, and more.

Apink’s Jung Eun Ji, the radio show’s host, was excited even before IU joined her. She explained that they are close friends who are also born in the same year, and IU said she was sorry for not coming on the radio show sooner.

Jung Eun Ji said, “This is our eighth year knowing each other. It first started when I went up to you at ‘Music Bank’ and said, ‘I’m a fan of you.’ That was when we were still wearing school uniforms. And after that, we met at various events like end-of-the-year shows. But we don’t really meet up that much.” IU added, “But we have eaten and chatted in hotel rooms when we’re overseas. We call each other quite often to just talk about things. We became friends in our teens and now we’re in our twenties. The topics of our conversations have changed, we talk about our health and work a lot now.”

They also shared which songs they’d want to sing together. Jung Eun Ji picked “Blueming” while IU picked “Dear Name” and she explained, “I think if Jung Eun Ji sang ‘Dear Name,’ she’d be able to make it her own. I think she has vocal talent that is great at expressing dramatic music.” Jung Eun Ji said, “I got choked up with emotions when I heard that song. I’ll try to upload a cover of it one day.”

Along with her friendship with Jung Eun Ji, IU is also known to be close friends with Yoo In Na and Kang Han Na. IU said, “I usually watch movies and order food with Kang Han Na. She’s quite calm but she has this unique energy to her and she’s so much fun. She jokes around a lot but it’s never too much.”

She also said, “With Yoo In Na, we basically live together. We even live in the same building. It goes beyond just meeting up, we sometimes like to just do our own work separately in the same space. It’s like we think of each other as companion dogs.” IU added, “It’s usually me who goes over to her house. I feel so reassured. Because both Yoo In Na and Kang Han Na live alone, our parents also feel reassured knowing we have each other.” 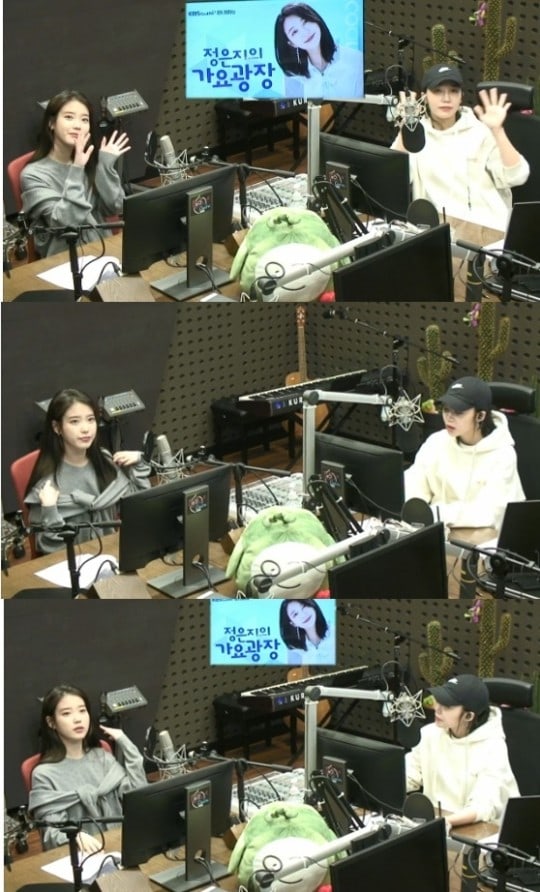 IU caught fans up with what she’s been doing as she practices social distancing. She said, “I’ve been watching ‘Money Heist’ on Netflix. Also, I eat almost all of my meals at home because we’re practicing social distancing. Because I’m not moving around a lot, I found myself rapidly gaining weight. So I bought a treadmill and I run on it for an hour every day. I was born with weak joints and bones, so I always work hard to stay healthy.”

She also shared exciting news for what she’s preparing for the rest of the year. Regarding her upcoming film “Dream,” IU said, “We’re going to start filming in May. I recently met with the cast and crew to talk about the film. It was great. Actually, my character in the film is similar to what Jung Eun Ji is like in real life.” IU said she’s been writing lyrics that she hopes to give to other singers and added, “My motto this year is ‘Keep things light, have fun, do lots.’ I want to work on lots of different musical projects outside of my own album.”

Finally, as IU wrapped up her appearance, she made sure to show her support for Jung Eun Ji as she said, “I’m not really here to promote anything for myself. But Apink is having a comeback today at 6 p.m. KST. The teasers were so eye-catching, and the visuals and maturity left an impression on me. The song is called ‘Dumhdurum.’ Please anticipate it.”