Jo Jung Suk shared his amazement over how well his drama OST is doing on the charts!

The actor is currently starring in the tvN drama “Hospital Playlist,” and he also sang the show’s OST titled “Aloha.” The track quickly took No. 1 on music charts upon its release and it’s kept ranking high since then. 20 days after the song came out, “Aloha” grabbed No. 1 on Korea’s largest music platform, Melon. 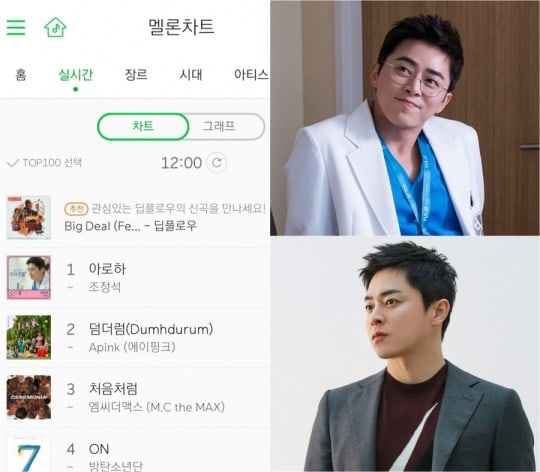 “Aloha” is a remake of the 2001 song of the same name by the trio Cool, and it’s a warm track that showcases Jo Jung Suk’s smooth and sweet voice.

The actor has responded to its success by saying, “It’s a song that I sang for the drama and I had no idea it would receive this much love. I’m very happy and grateful.”

The five songs released so far for the drama’s soundtrack have all been remakes of popular tracks from the 90s and early 2000s, when the five main characters were attending medical school together. The longtime friends become doctors at the same hospital and they also perform as a band.

Jo Jung Suk said, “Lately I’ve been having a really new experience through ‘Hospital Playlist’ as my co-stars and I sing and perform songs that many people love. It’s so much fun and I’m happy. I hope that this energy can be shared with a lot of people.”

Check out “Aloha” below!