Update: VIXX’s Ravi And Ailee Team Up For New Single “What About You”

VIXX’s Ravi and Ailee have now released their collaboration “What About You”!

Check out a live performance of their song here:

VIXX’s Ravi shared a teaser for his upcoming collab with Ailee!

Their new single “What About You” comes out on April 28, and a teaser photo shows an ex-boyfriend texting at 4:38 a.m. to ask, “How have you been lately?” and “Do you have time now?” The person just replies, “Don’t ask.”

VIXX’s Ravi and Ailee are joining forces for a new release!

On April 19 at midnight KST, the two singers revealed that they were gearing up to release something together later this month.

Both Ravi and Ailee shared photos of themselves on their social media accounts, along with the exciting announcement that fans could expect a collaboration on April 28 at 6 p.m. KST.

Ravi also went on to respond to Ailee’s post by leaving an enthusiastic string of emojis in the comments. 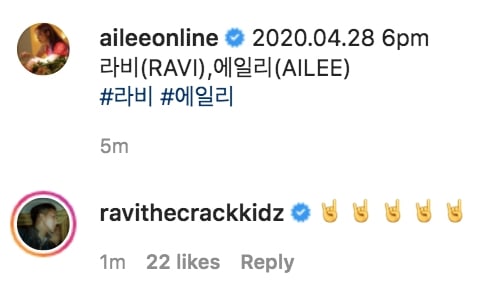 Are you excited to see what Ravi and Ailee have in store? Stay tuned for updates!

VIXX
Ailee
Ravi
How does this article make you feel?