The identity of Half-Half Chicken was revealed to be a former survival show contestant gearing up for a trot debut!

On the April 19 episode of MBC’s “The King of Mask Singer,” a new batch of mystery singers took to the stage to battle for a chance at the throne.

During the first round of the competition, Half-Half Chicken and Black-And-Red Noodles sang a duet to Jang Yoon Jung’s “Flower.”

Black-And-Red Noodles won the round with 14 to 7 votes, and Half-Half Chicken remained on stage to reveal her identity while singing Jung Su Ra’s “Delight” (literal title).

Half-Half Chicken took off her mask and revealed herself to be Hwang In Sun, who earned the nickname “Aunt Hwang” on Mnet’s “Produce 101” and also competed on Chosun TV’s “Miss Trot.” She is currently gearing up to make her debut as a trot singer.

Hwang In Sun remarked, “I think it’s time for me to stop competing [on survival shows]. I danced for a long time before I belatedly began my singing career. It was really difficult and I was very tired, but I feel as if I’ve found my place now. I want to do a good job preparing a trot album.” 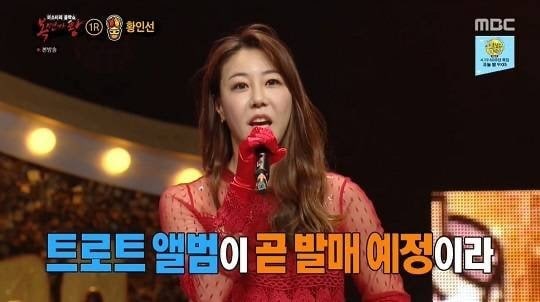 After the broadcast, Hwang In Sun shared photos from the show on Instagram.

She wrote, “Thank you to the staff of ‘The King of Mask Singer’ for allowing me to stand on such a big stage. As someone who made it through each and every day with anxiety and nervousness about whether I’d be able to make it as each year passed, this performance gave me the confidence that I can do it too. Thank you so much to those who cheered for me. The trot single album that will become my first step will finally be released tomorrow. Since it’s a fresh start for me, please give me lots of support, and I’ll become singer Hwang In Sun who takes another step forward. Thank you!”

Hwang In Sun
The King of Mask Singer
How does this article make you feel?