Kim Heechul shared his response to criticism regarding his comments on the latest episode of “7.7 Billion in Love.”

On April 20, JTBC aired a new episode of its variety talk show in which the host and panel discussed the topic of malicious comments. Heechul is one of the show’s three co-hosts and he mentioned how malicious commenters acted after the passing of his close friends Sulli and Goo Hara last year.

He said he had been greatly angered over how men and women fought after the stars’ deaths, blaming each other for their passing. He stated that men had sexually harassed them through malicious comments and women had shamed them by saying they were a disgrace to women, and then they both looked for ways to blame each other after their deaths.

Heechul also shared his anger over how people who had been so malicious had then said, “We’re so sad so we’re going to commemorate them.” 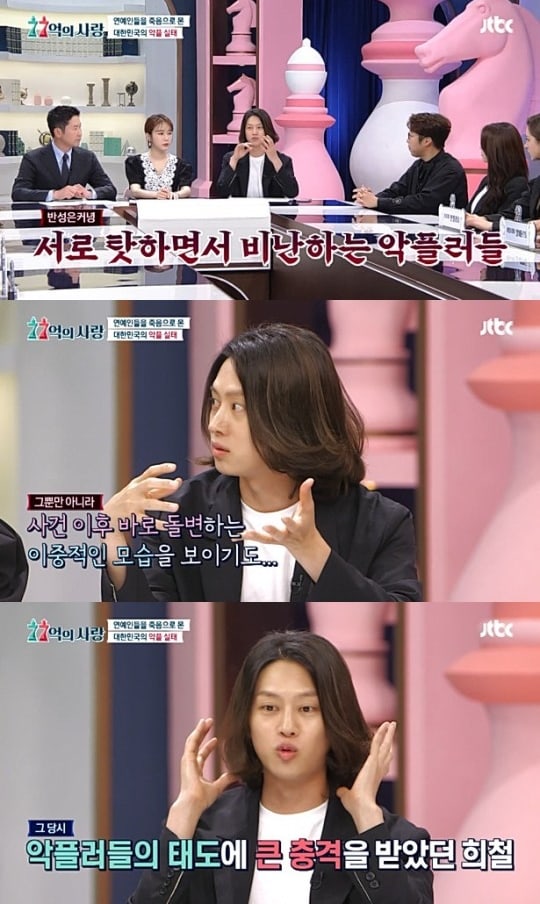 The writer continued, “Even under the assumption that male and female malicious commenters were both in the wrong, the male-centered arguments were what were realized as the official attacks against the deceased. Even though malicious commenters of all genders existed, the majority of those who respected and supported Sulli’s life were female feminists.”

He added, “Once again, I don’t think that I can assess the pent-up anger of losing a close colleague and don’t have the slightest intent to denigrate his pent-up anger. But I don’t think anyone should speak on the behalf of the deceased who can no longer do so, and I think that this kind of critical reading is necessary.”

Commenting under his post, Heechul replied, “Hey mister, is it important whether the malicious commenter or criminal was male or female? Gender aside, if you commit a crime, you’re a criminal. I and other colleagues who were close with them still can’t say their name out loud out of sadness and mention them with caution, but who are you to write something like this using the deceased?”

Heechul then posted on the forum for his fans on the online community DC Inside.

His full statement is below:

I’m sure there are fans who’ve already seen it, but I’m uploading a post because things can get messy. I’m sure crappy people will swarm my Instagram account or here to emit waste.

Yesterday, we discussed malicious comments on “7.7 Billion in Love.” Someone said this and that on his social media account, I felt dismayed reading that post, and I replied thinking that I shouldn’t hold back this time.

What I still don’t get is, is the controversy that “ZZAM VIBE” is misogynistic. People who have been my fans for a long time and fans of other singers know how the online café “Women Era” create trashy rumors about me and many other people. So I wrote the lyrics, “They say I go back and forth between female hatred and male hatred,” but they got angry and made it seem as if I was a misogynist.

And yesterday, I talked about how malicious commenters said mean things regardless of gender to my two friends and then blamed each other saying “women killed them,” or “men killed them” after they passed away. And I felt disgusted that a writer who’s a reporter used the deceased as a weapon to share his thoughts and argue over right and wrong, despite the fact that he’s someone doesn’t know why the deceased had such a difficult time when alive and that he’s someone they’ve never heard of.

The reason why I’m writing this is…

I also feel sorry to my fans who had to respond to groundless rumors and fight with all kinds of malicious commenters just for liking a celebrity named Kim Heechul.

It’d be comfortable to just endure and ignore, but I really don’t think it’s right that people create stories about the deceased according to their preferences.

After losing my two friends last year, I stopped caring so much about being a celebrity. Although I’m someone who wanted to be a celebrity forever, I told my agency that I wanted to rest for a few months or a few years, and I also went to counseling here and there because I was so mentally exhausted. And then… I’ll work as a celebrity or I’ll quit… I guess that’s how it turned out.

But one thing, I’m leaving a post here where many people can comfortably see this because I always feel thankful and sorry to fans who like me. It doesn’t matter where this gets shared.

Finally, please share malicious comments that you see in this community (especially from “Women Era”). I punish them without leniency through my personal lawyer.

The latest episode of “7.7 Billion in Love” is available in full below:

Super Junior
Kim Heechul
7.7 Billion In Love
How does this article make you feel?