Apink Talks About 9th Anniversary, Achieving Their Dream, And More

Apink spoke about recently celebrating their anniversary, taking part in the choreography and songwriting for their comeback, and more!

The group appeared on the April 21 episode of “Idol Radio,” after having celebrated their ninth anniversary on April 19.

Oh Ha Young said, “I still feel like a rookie, but time really goes by too fast. When I hear people say ‘9th anniversary,’ I’m not sure what to do.” Jung Eun Ji shared, “When we first debuted, whenever we were asked what title we hoped to be called, we’d say that we wanted to be known as jangsu-dol [idols who’ve been active for a long time]. I feel like that dream’s come true when I see articles lately with headlines that say ‘Jangsu-dol Apink.'”

Apink won first place on “The Show” that day with their song “Dumhdurum.” Kim Nam Joo commented, “So many people worked hard on this album that it could even be said that Apink wasn’t the one that worked the hardest.”

She also expressed her gratitude to the composer Black Eyed Pilseung, who they’ve worked together with for a long time. She said, “The person I wanted to mention first when we accepted the trophy was our composer. That’s how much he cares for Apink.” 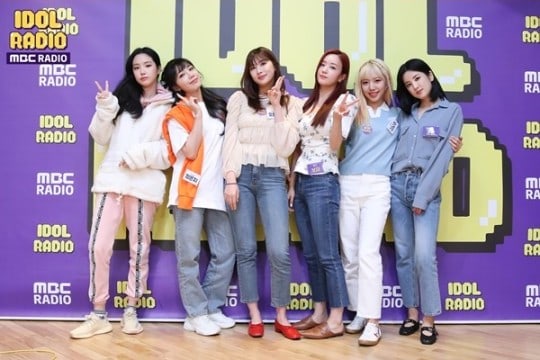 Yoon Bomi talked about working on the choreography for “Dumhdurum.” She commented, “It was a meaningful time of learning for me. It made me feel respect for choreographers.”

The members were also asked to write a letter to themselves 10 years from now. They said, “We hope that you’re still together with the members, healthy and laughing.”

As the show wrapped up, Son Naeun said, “We’ve been preparing this album for a long time and there are a lot of people who helped us and worked hard. I want to say thank you to all of those people. I’m happy because it seems like the time we spent working on this together hasn’t been in vain.”

Apink
Idol Radio
How does this article make you feel?