Previously, the show confirmed that Girls’ Generation’s Hyoyeon and Ailee would be part of the lineup. A new teaser for the show reveals that they will be joined by Cheetah, Jamie (formerly Park Jimin), Sleeq, CLC’s Yeeun, KARD’s Jiwoo, Queen WA$ABII, Yunhway, and Lee Young Ji.

Yunhway is part of the rising hip hop scene and is known for her unique vocal color. She recently appeared on “Show Me the Money 8.” Sleeq and Queen WA$ABII are underground rappers known for their hard-hitting raps and individualistic characters. Lee Young Ji was the first female winner of the audition program “High School Rapper” and became famous for her ear-catching tone and powerful rapping. 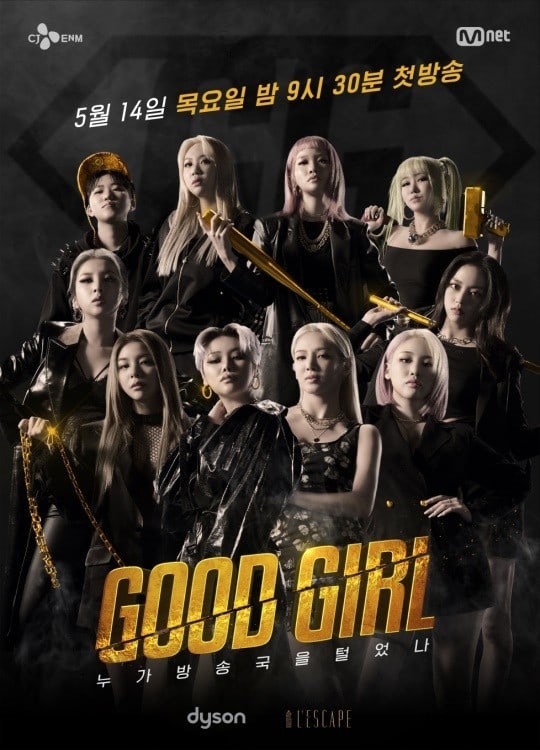 On April 29, a source from Mnet confirmed that Ailee and Hyoyeon are appearing on the show. They stated that they cannot yet reveal the identities of the program’s other cast members.

On April 22, Mnet dropped a mysterious teaser on Twitter that was captioned, “You don’t know what I know.” The teaser video ended with the emergence of a logo with the letters “GG.”

YOU DON’T KNOW WHAT I KNOW pic.twitter.com/GdBGwZ7n4C

On April 23, it was confirmed that Mnet would be launching a new hip hop reality music show called “Good Girl.” “Good Girl” will feature some of the best female hip hop and R&B artists around the country, including underground rappers, current idols, and popular artists. These artists will be put on a team together and will complete quests in order to win a prize.

The contestants, who are drawn from a variety of backgrounds, will not be competing against each other. Instead, the broadcast station (Mnet) itself will be their competitor. The subtitle for the show, in Korean, is “Who robbed the broadcast station?” The official teaser for the show is set up like a crime drama, in which a group of mysterious women rob Mnet.

The production staff stated, “These days, many people are craving collaboration performances between female musicians. Through ‘Good Girl,’ you will be able to see a new kind of chemistry from musicians who are working in various ‘scenes.’ They will be able to create diverse performances when they come together, so please look forward to it. It will be exciting to watch ‘strong’ female musicians show their fierce competitiveness as they clear Mnet’s quests.”

Industry sources reported that Girls’ Generation’s Hyoyeon would be one of the contestants on the show. On April 23, Mnet confirmed the casting news.

Girls' Generation
Hyoyeon
Mnet
Good Girl
How does this article make you feel?