The agency of model and actress Kang Seung Hyun recently shut down rumors of school violence, only to be met with additional statements from victims.

On April 22, a post was uploaded onto an online community stating that the writer had been assaulted by a celebrity in middle school. They also added, “It felt unfair when they won a supermodel competition and the judges told her they picked her for her character.” Although Kang Seung Hyun’s name was not explicitly mentioned, many people assumed it was her due to various clues from the post.

They additionally offered to upload photos from their middle school graduation album as well as proof from other classmates as further evidence. They explained, “Her family is already well-off, and I can’t do anything about her living happily with her famous friends and family with the money she has already made. However, I no longer want to see her on any form of media. I hope there are no more victims like me, and I hope to be of some help to other victims who hold onto their nightmares like I do.”

The rumors currently going around various online communities regarding Kang Seung Hyun being violent in school are completely false.

After investigating, the story from the anonymous community post has no connection to actress Kang Seung Hyun.

In addition, we plan to take legal action against these malicious rumors that were uploaded anonymously regarding this school violence.

Once again, we want to clarify that this anonymous opinion in regards to Kang Seung Hyun is completely false. We ask that you refrain from reports having to do with issues that have not been confirmed.

Lastly, we want to sincerely thank everyone for loving Kang Seung Hyun.

Following this statement, the alleged victim came forward to release their middle school yearbook and diploma as well as texts with another alleged victim, claiming they knew Kang Seung Hyun’s agency would respond in this manner. 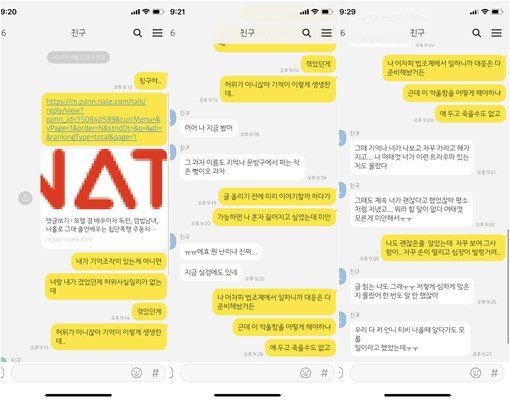 In the texts, person A told person B, “Unless my memory has been manipulated, there is no way that what you and I experienced is false. My memory is so vivid, it cannot be false.”

B responded, “I even remember the name of the chips they stole from me.” A also shared, “I thought about messaging you before I uploaded the post, but I wanted to carry the weight of it myself if I could.”

A continued, “Since I work in law, I’ve prepared everything. However, what do I do about this injustice?” B responded, “I remember when you would always tell me to go away. I had no idea you were traumatized from that. You always said you were okay. I have no words. I’m sorry for not knowing until now.”

A replied, “I thought I was okay too, but I kept seeing them. My hands shake and my heart beats so fast.” B shared, “I feel like that just reading the post. I didn’t know you were hit that hard. You never said anything. When she came out on TV, we said the situation was something we couldn’t comprehend.”

Along with the text messages, A shared, “I knew they would respond like that. I have added evidence from another witness, and I will deal with the rest with legal action.”

Following the alleged first victim’s response, another victim came forward. On April 23, they commented on the original post, saying, “I’m your classmate. Thank you for being courageous. You’ve worked hard living while holding onto something so heavy in your heart.”

They added the names of their elementary and middle school, continuing, “It’s bitter to write about my schools like this for the first time in awhile. Although I was not a victim of assault or threats like other people, I knew [Kang Seung Hyun] since elementary school, and I still remember how she and her friends would bully others with their words and actions.”

They continued, “Since we lived in the same neighborhood, after starting high school, they would call me over just to laugh by themselves about memories I didn’t remember. If I pretended not to hear them, they would ask why I wasn’t answering. I would tell them to go away, and they would laugh about that among themselves. The most evil part about it was how they wouldn’t act like that if someone else was nearby.”

Lastly they shared, “I hope she admits what kind of people they were at that time and that she remembers what she and her friends were like in order to properly apologize to all the victims.”

Kang Seung Hyun
XPN
How does this article make you feel?