Park Seo Joon and Lee Hyun Woo seem to be excited about their new film!

The two friends will be starring together in the upcoming film “Dream” (literal title), which will be helmed by the director of the record-breaking hit movie “Extreme Job” and the recent JTBC drama “Melo Is My Nature.” The film will tell the story of a motley crew of inexperienced players trying out for the Homeless World Cup, an annual international soccer event.

Park Seo Joon will be starring in the movie as Yoon Hong Dae, a professional soccer player who ends up coaching the team after he is put on disciplinary probation. Lee Hyun Woo will play the role of In Sun, one of the players on the team, while IU will star as the film’s female lead.

On April 25, Park Seo Joon took to Instagram to share a sneak peek of the script for the upcoming film. The actor posted a photo of the screenplay’s whimsical cover, which bears names and cartoonish portraits of each of the main characters—as well as a post-it with the name of Park Seo Joon’s character Hong Dae.

In addition to pointing out his character’s portrait in the photo, Park Seo Joon wrote in the caption, “Hong Dae.”

Shortly afterwards, Lee Hyun Woo responded by leaving a comment with “In Sun”—the name of his own character—and a couple of cute emojis. 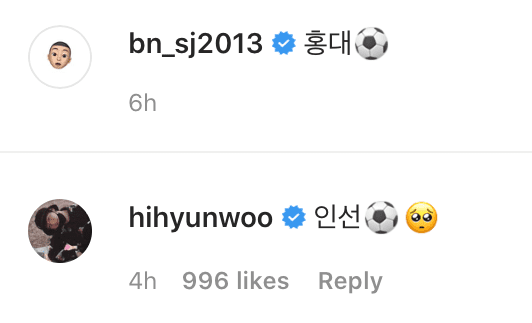 Are you excited to see Park Seo Joon, Lee Hyun Woo, and IU in this new film?

In the meantime, watch Park Seo Joon in his hit drama “What’s Wrong with Secretary Kim” with English subtitles below!

Park Seo Joon
Lee Hyun Woo
How does this article make you feel?