Kang Daniel Talks About Wrapping Up Promotions For “CYAN,” Traveling Alone, And More

Fashion magazine Grazia has released their pictorial with Kang Daniel!

In the interview following the photo shoot, Kang Daniel talked about wrapping up promotions for “CYAN.” He said, “Actually, I still have a lot of work to do, so I don’t feel like I’m completely finished but like I’m done with the first part. I’m remaining on my toes.”

When asked about what he wants to do the most since his promotions are over, he replied, “It’s exercise. I really wanted to do it because I couldn’t work out during my promotions. Working out makes me feel like I’m relieving my complicated mind. I really needed it.” 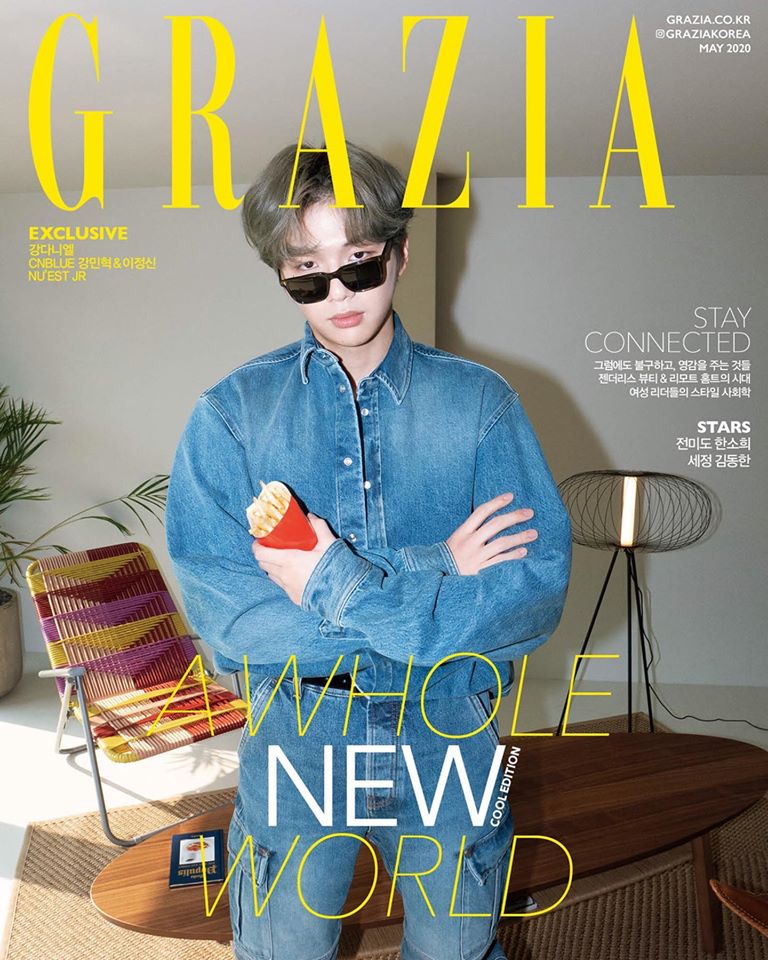 His first solo album “Color on Me” came out only a month after preparation, but this mini album took a long time to work on. When asked about what changed, he shared, “A lot of things have changed, but if I were to pick one of them, I think the music that I wanted to show [this time] was well-organized. I didn’t have time to spare when I made my first solo album, so I worked with a producer, but in this album, I had the freedom to write songs, so I thought I’d expand the spectrum a little bit more.”

“CYAN” is the first album of the color series to be released in a trilogy. Kang Daniel explained, “It was an album that came out after a short break, so I wanted people to enjoy my songs comfortably. Just hearing the word ‘the songs are nice’ makes me think that I’ve achieved the goal of this album.”

Kang Daniel was also asked to evaluate his promotions for “CYAN,” and he candidly commented, “There are more than a couple parts that I regret. I think what I see will be different from what people see and hear. Ever since a long time ago, even if there is a part of my outfit I don’t like, I have the type of personality where I obsess over it all day long, but this is my work, so I was even more careful about it. But what I was proud of during this promotion period was that it’s been a long time since someone has done this kind of style among solo singers in Korea. I tried a new style, and I was very grateful that the people who were on stage with me told me that they enjoyed performing. So I thought that I should continue to do well in the future.” 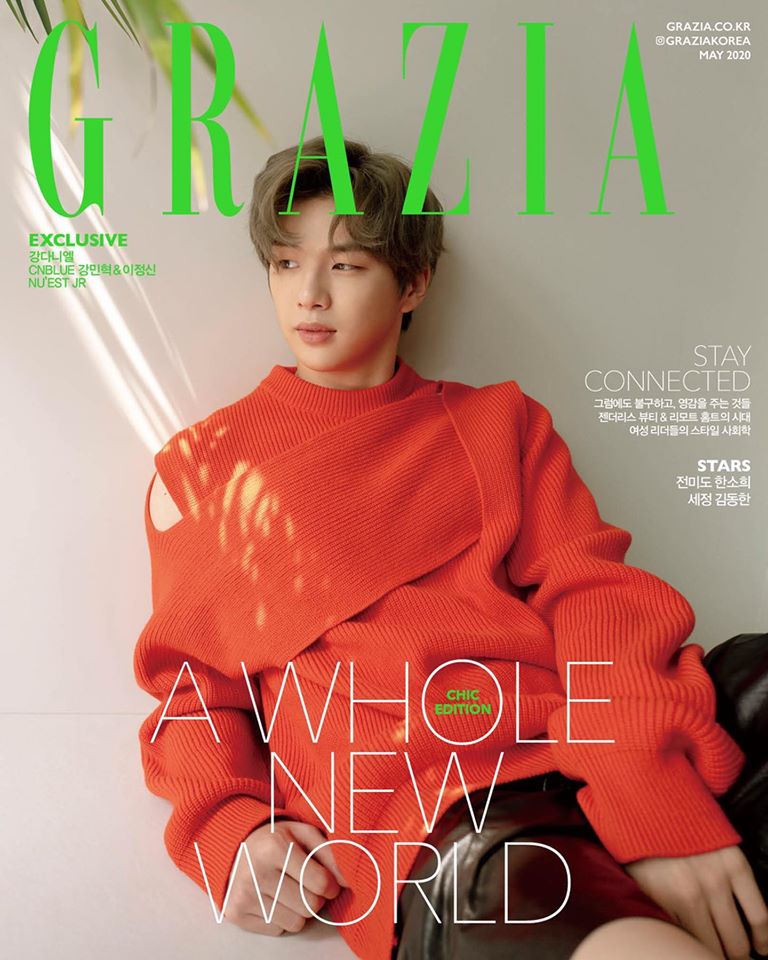 When asked if there is a vocal style he’s like to pursue, he answered, “I don’t think there is a particular style. I like various musicians regardless of time, and I enjoy listening to soul singers such as Bing Crosby and James Brown. But I can’t do that on my stage. The genre I’m aiming for is different, too. Rather than trying to complete my music with one style, I think it will be made naturally if I work hard.”

Kang Daniel shared the driving force behind his passion for music. He said, “Watching other artists’ performances is my biggest [motivation]. It may seem a bit unique, but I enjoy being stimulated. When I meet people who are better than me, I don’t simply think they’re cool, but it also makes me want to be like them. The reason I started b-boying was because I thought, ‘That looks cool, but I think I can do it, too.’ If I think about it, I want to catch up with them. I want to be on par with them, so I put the action into practice right away. So they become really good house mentors to me.” 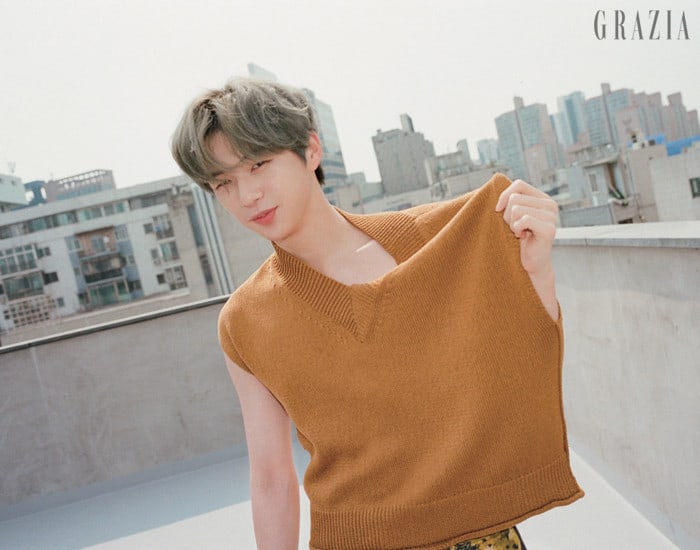 The singer also mentioned being a homebody. When asked about what he’s been doing at home lately, he said, “Personally, I really enjoyed the movie ‘Ready Player One.’ Perhaps it’s because of that movie, but I’ve been into VR (virtual reality) lately.” However, he’s been mostly spending time researching outfits and concepts for his next album.

Next, he talked about traveling. He said, “I enjoy traveling alone. I’ve been going places by myself since I was in third grade. I also go on bicycle trips to Ulsan. At that time, my parents told me to take an intercity bus, and I even had to go to the terminal and buy tickets myself. But now that I’m older, I actually can’t go out much.”

Kang Daniel talked more about traveling solo, saying, “Ever since I was young, I didn’t like trips that were mandatory to attend such as retreats and field trips. I just wanted to look outside and space out, but I hated having to move according to schedule. Moreover, I’m a type of person who has a lot of thoughts, so when I travel alone, I often get lost in thought, but it’s better to have no one to break that time. I think the biggest advantage is that I can do whatever I want without being influenced by anyone.”

When asked about where he would like to go for his next trip and who he would like to go with, he said, “Actually, I don’t think it’s a bad idea to go alone. If I have to pick someone, I want to go to the North Pole or the South Pole with my dancer friends. I’d like to say hello to penguins or have some dangerous but attractive experiences like in ‘National Geographic.'” 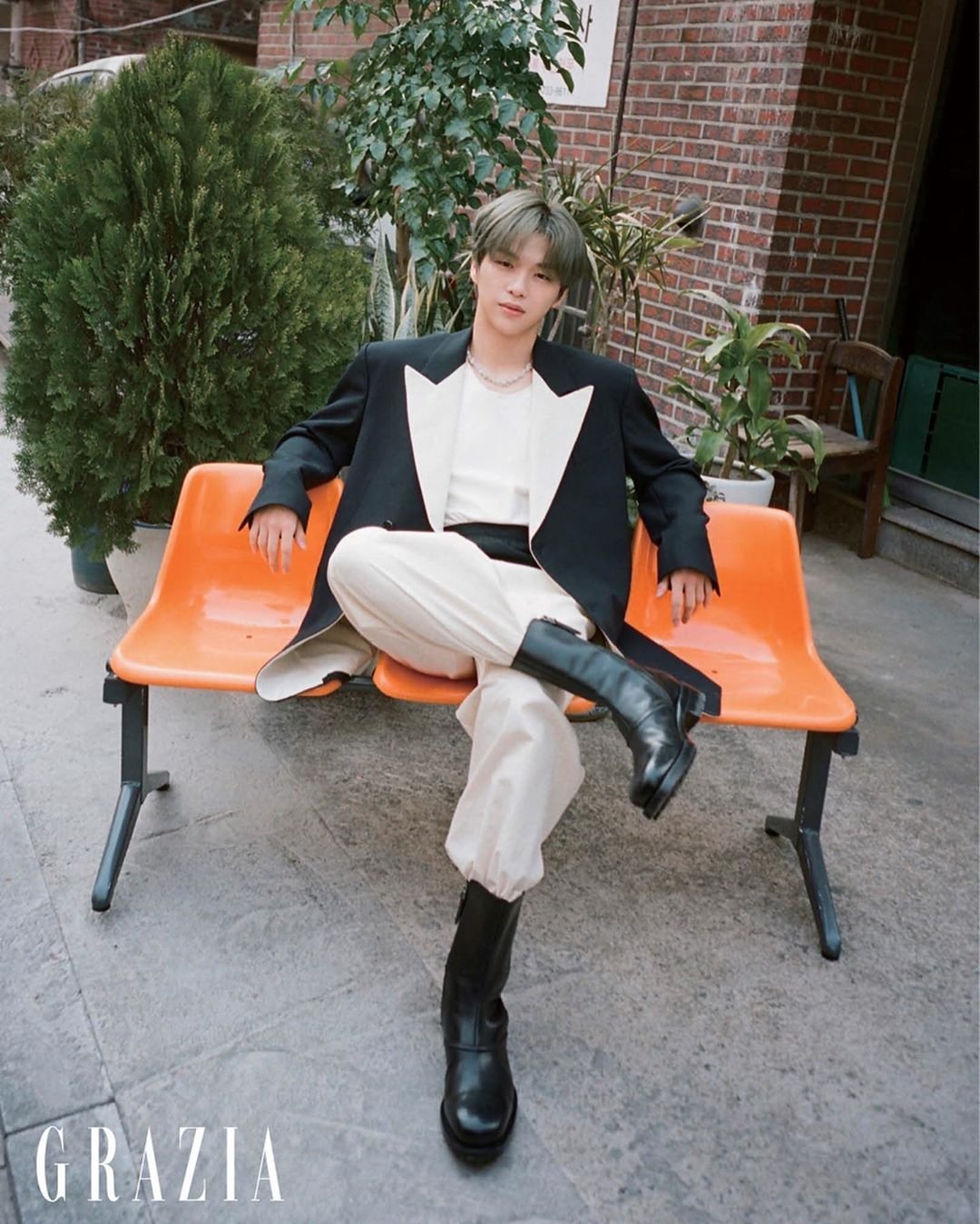 Then Kang Daniel shared his definition of happiness. He said, “I think it’s to live a life without worries. Actually, everyone is busy living these days, and they have a lot of thoughts. My time goes by naturally, but I think I’m happy when I’m able to reduce my worries and focus more on what I can do by reducing the categories of thoughts I have now.” 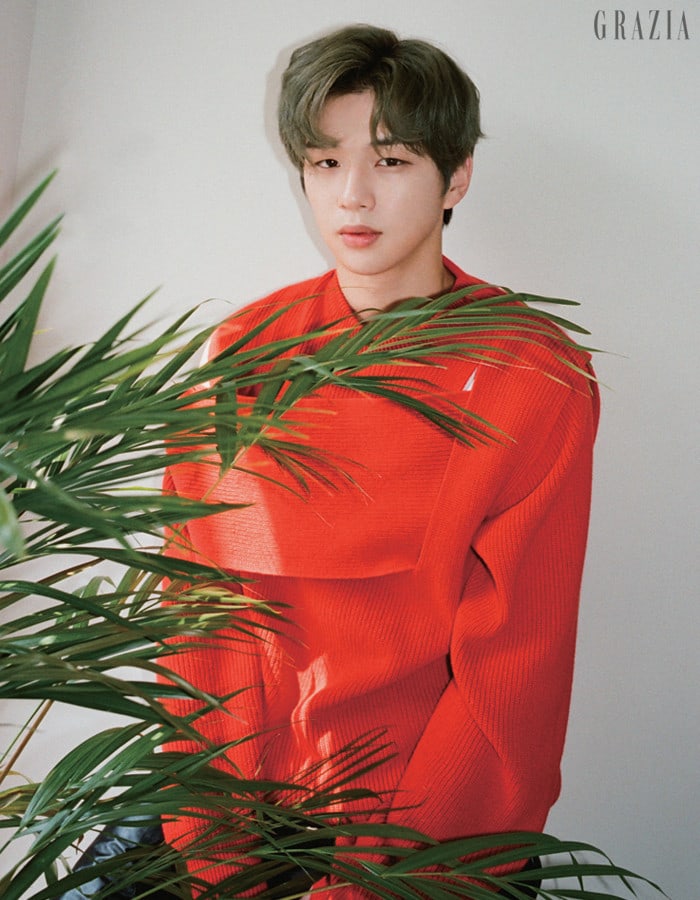 Lastly, Kang Daniel gave an update about when he’ll be making his next comeback. He shared, “I can’t tell you when that will be. But I said soon, so it could be three days or a month later. One thing for sure is that it won’t be that long. I hope everyone stays healthy until then. I think it’d be better for us to be at least one meter apart and meet our NPCs (non-player characters) for now. Let’s all become warriors that way.” 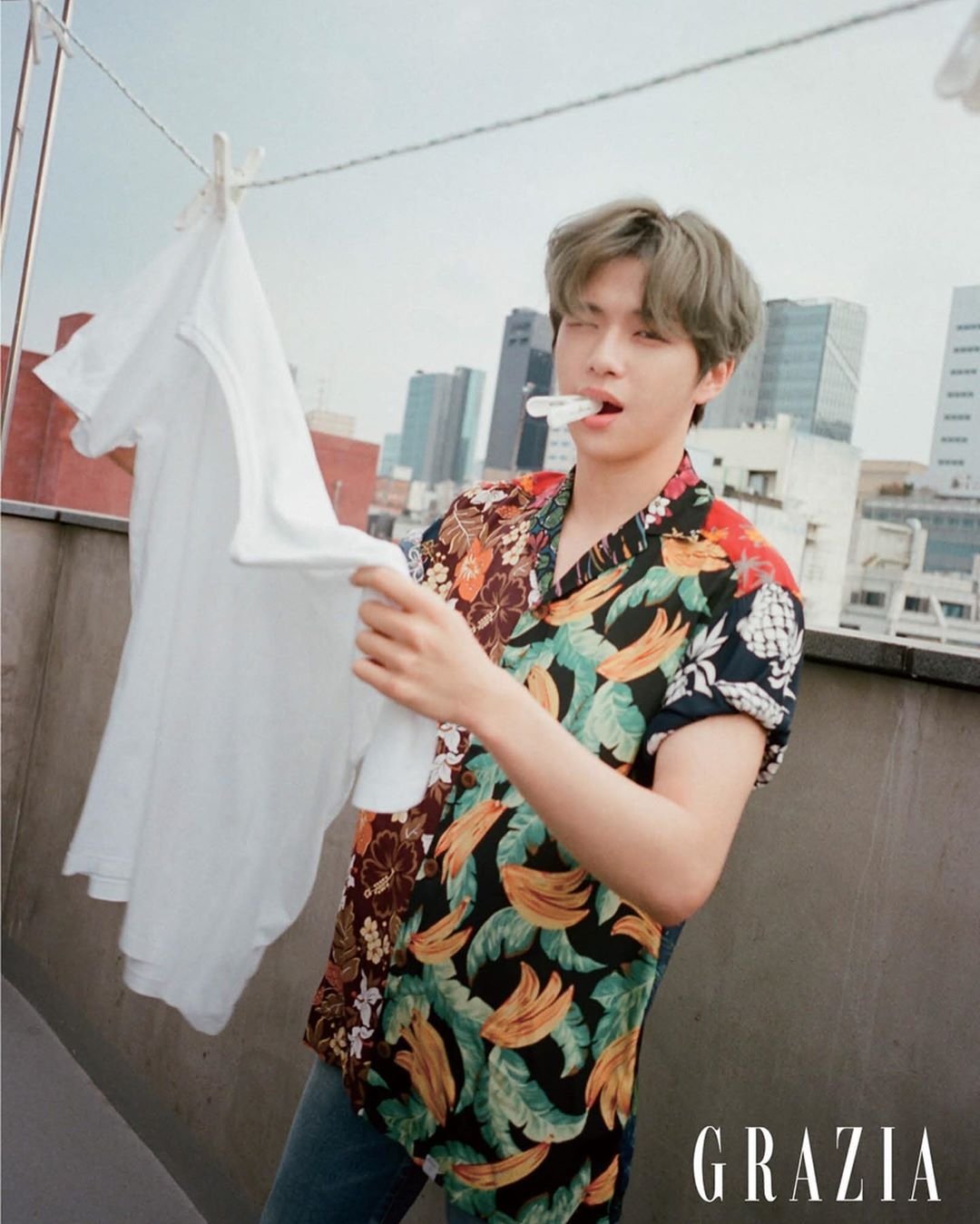 Grazia
Kang Daniel
How does this article make you feel?